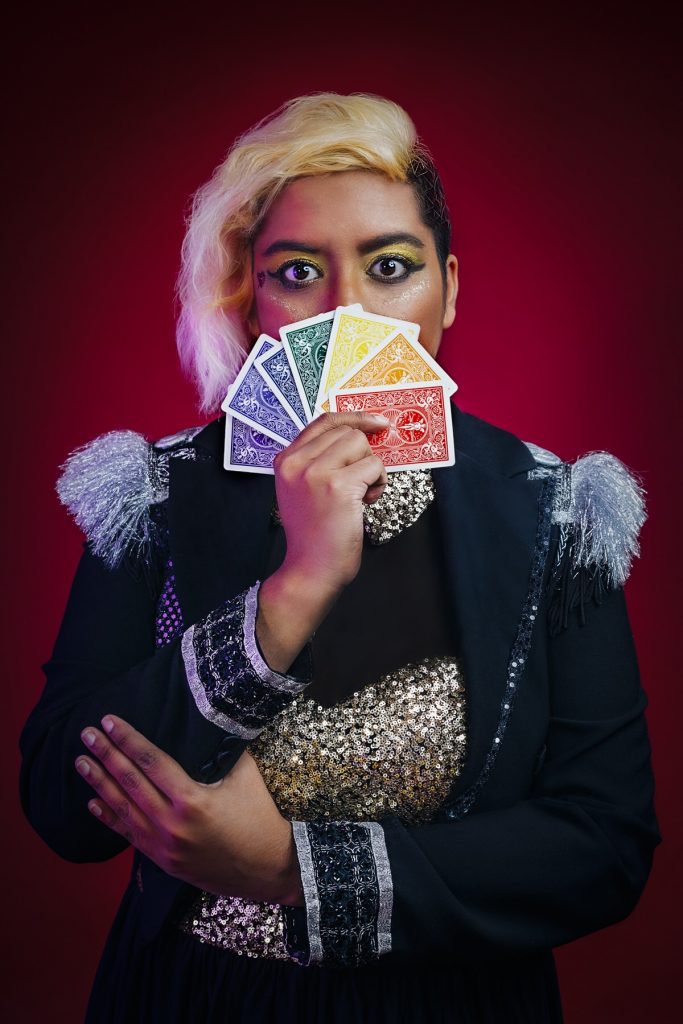 Creatrix Tiara has produced and performed interdisciplinary work in writing, performance art, digital games and music (to name a few) across Australia and the United States. She recently co-produced and performed in all-disabled primarily-queer cabaret Quippings: Not Normcore! in Midsumma 2018 and was a Dandy Minion and Burlesque Dancer for the Helpmann Award-winning 24 Decades of Popular Music by Taylor Mac in the 2017 Melbourne Festival. Tiara is a current staff writer with Autostraddle and has also written for publications like The Establishment, Racialicious, The Scavenger, VICE Motherboard, The Slutist, Malayskiani, and more. Queer Lady Magician, her first full-length solo show,  debuts at the 2018 Melbourne Fringe Festival with the support of the Women’s Circus Still I Rise mentorship program.

Firstly, I’m queer, and that by itself is already super rare. There aren’t a ton of magicians that are out about their queerness, and fewer still that incorporate it into their work somehow. In the show I do talk about another queer trans magician, Blake Maxam, a dear friend and one of the reasons I regained my love of magic after a long absence – her story becomes part of the emotional core of the show. Blake’s story comes right before the story of my emotionally abusive and manipulative ex-girlfriend (who had introduced me to Blake in the first place). I feel we can still do better sharing stories about abuse in queer relationships. I feel queer relationships are often seen as healthier and more open than straight ones. As an abuse survivor, I sometimes feel I betray the queer cause by talking about my experiences.

I wanted to showcase both Blake and my ex because my experiences with both of them have really shaped my approach to magic and my life in general, but also to show a wider more complex variety of queer friendships, queer relationships, queer people in general. Stage magic doesn’t often get as personal and heartfelt as other forms of queer art, and that personal heartfelt approach is so important to me and my queerness.

How does your show subvert the appearance and personality of straight white cis-masculinity that is so often central to the magician role? Loudness, charisma and charm are performance tricks that aid the sleight of hand needed to create the distractions and illusions that makes the spectacle of live magic possible. Is this something you address in the show?

Most definitely! One of the more obvious ways Queer Lady Magician subverts that trope is that the Cis White Male embodying those tropes is the Assistant, played by cabaret artist Bradley Storer. His role is a reflection of toxic masculinity, particularly the kind of brash overbearing trope you talk about.

One of the leading questions in the show is “do you need to be good at manipulation to be a good magician?”, which the aforementioned scenes with Blake and my ex aim to address. I’ve had bad experiences with charisma and charm due to past dealings with emotionally manipulative people who relied on those things to get their way. Making this show has been an interesting challenge in finding ways to utilise charisma and charm in ways that are ethical and non-manipulative.

In addition to the support of the Women’s Circus’s Still I Rise Fringe Festival performance development grant, you’ve relied on the support of fans and friends. Can you tell me something about how your found family has supported this show?

Queer Lady Magician is a community-oriented project in so many ways.

The moment I named the idea I had tons of people volunteering their assistance – I had a creative team lined up even before Women’s Circus came on board! And there was that amazing fundraiser that Mama Alto and Mx Munro put together for me that raised about $1000, which sold out and had about 15 artists donating their time to help.

I feel like a lot of queer performance, cabaret, burlesque, and so on is still reliant on community support. Practically it’s because we’re often shut out from a lot of conventional avenues, such as funding or commercial markets. 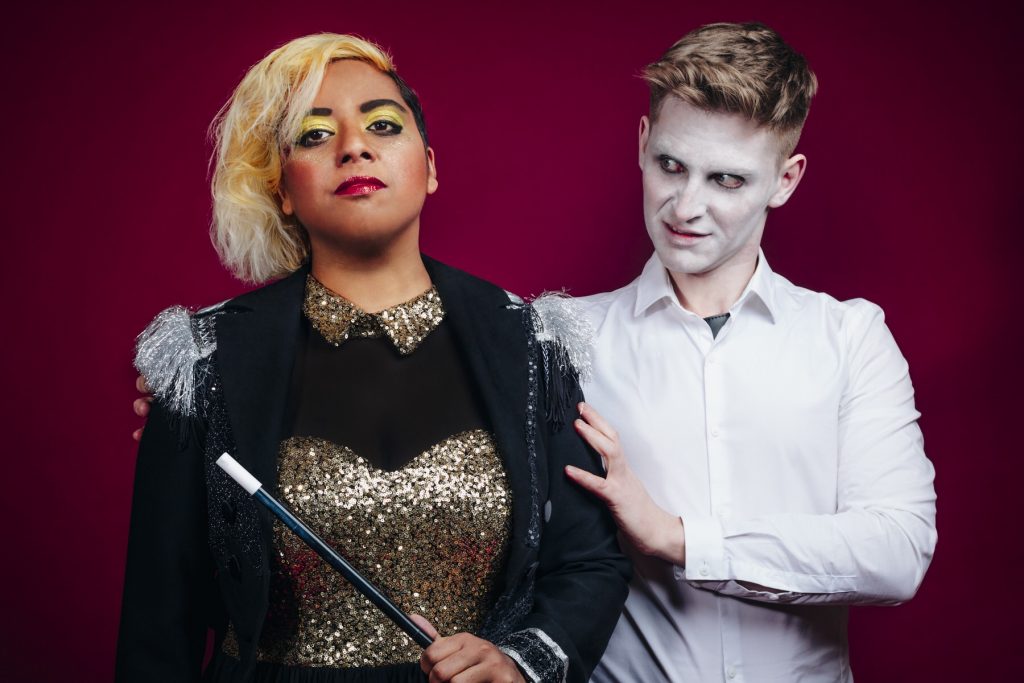 By its very name, queerness is the uncanny, the elusive, the indefinable in the way people relate or don’t relate to each other, especially in intimate spaces. Is the everyday practice of queerness anything like a live magic act?

You’ve pretty much defined stage magic right there – the artform dedicated to depicting the uncanny, elusive, indefinable. Which makes its lack of representation of queer people or queer narratives (or, conversely, its lack of popularity amongst queer artists) surprising – there’s so much potential in there! Magic can give us the opportunity to think of the world in a new way, inspiring us to consider things differently and break our assumptions – which is true for queerness as well.

Henry Hay, who wrote one of magic’s seminal texts Amateur Magician’s Handbook says that magic is created in relationship with the audience member: the magic ultimately happens in that audience member’s mind. In some ways stage magic can be quite an intimate act. It’s not enough to just perform a particular sleight-of-hand move or say a particular line – you need to build that connection with your audience, get them invested and involved in the world you are building together. You can’t capture that elusive indefinable feeling on your own.