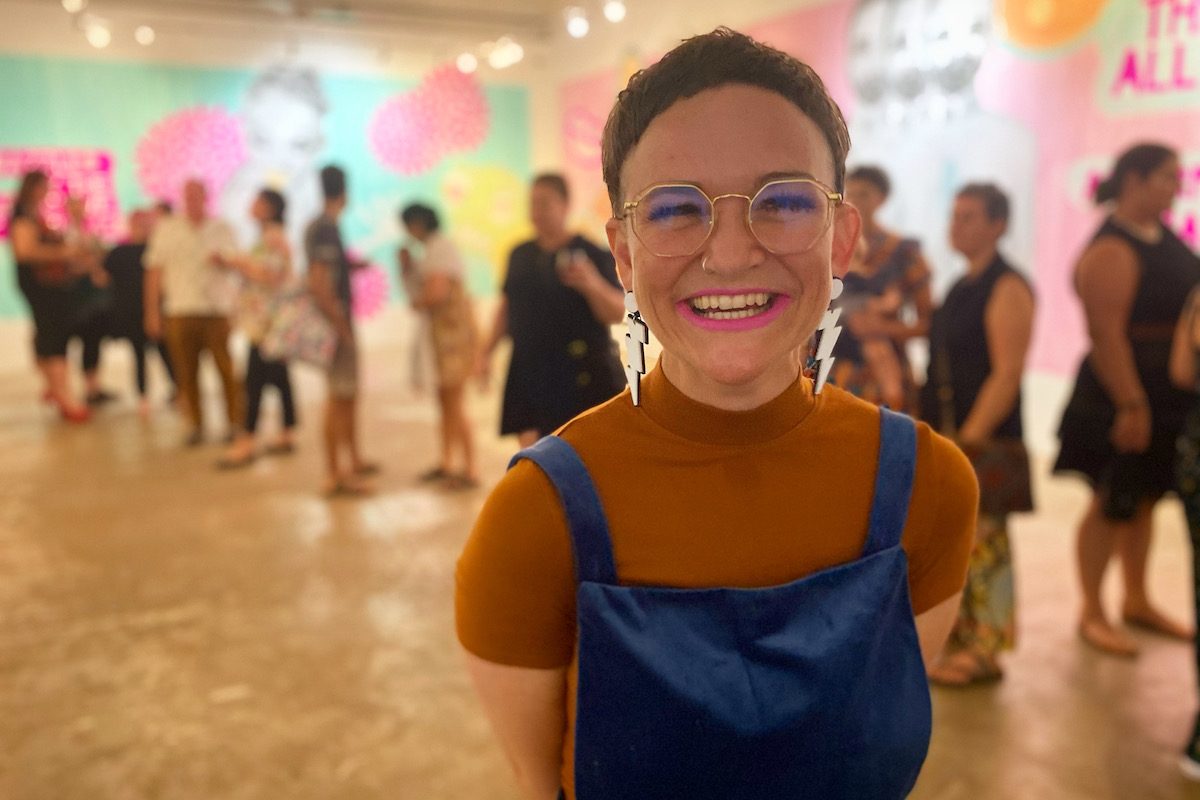 Their subject is themselves: distorted, caricatured, split and recompiled into an army of new configurations rallying warlike against the perils of a heterosexist and cis-normative world. A selection of these self-portraits has recently been exhibited in Do I Seduce You? at the Northern Centre of Contemporary Art (NCCA).

Tarzan sat down with arts worker Carmen Ansaldo to reflect on the monumental experience of their first solo exhibition, and its wider contribution to queer and gender non-confirming visibility within one of Australia’s regional hubs.

This conversation happens on Larrakia land. Tarzan also works on Wulna land which spans the mouth of Adelaide River east to Mary River floodplains in the Northern Territory.

Carmen Ansaldo: Do I Seduce You? asked the question, “What happens when the body is both the penetrator and the penetrated, what then?” What answers to this question has the process and product of this exhibition yielded?

Tarzan JungleQueen: The provocations in Do I Seduce You? were a conceptual focal point for the exhibition rather than a literal question that I personally needed answering.

My posturing as both penetrator/penetrated, dominant/submissive, non-masc/non-fem, antagonised the same binary duality that clear cut questions/answers often fall into.

Asking Do I Seduce You? shifted the onus onto the viewer, who assumed the role of voyeur, to discover their own answers.

The absence of seduction within my disposition forced the observer to query their own assumptions surrounding the hyper-sexualisation of the gendered body.

This work normalised both the ‘wearing’ and the ‘wearer’ which dissolves their binary, oppositional nature. 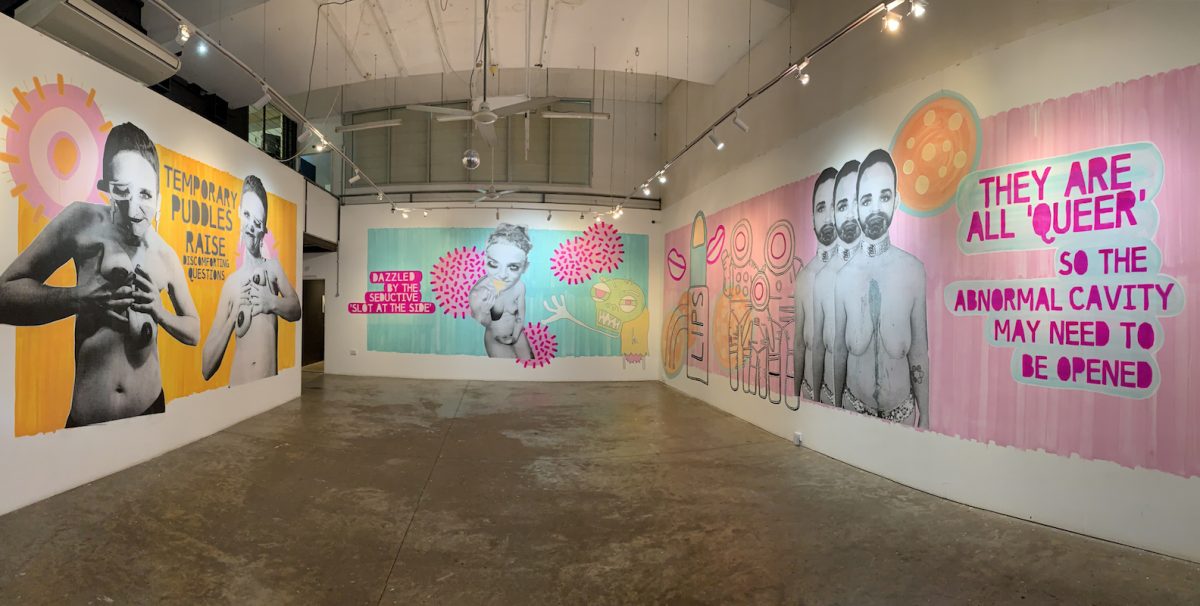 CA: You explore questions of queerness, desire and subversion through the presentation of your own non-binary body in varying configurations and graphic confrontations. In this sense, your body becomes the canvas that every work is inscribed upon. Why was self-portraiture the genre that felt most appropriate for this exploration?

TJQ: I can’t speak for any queer bodies other than my own, so it made sense to me that self-imagery was the only material I could use honestly to parody, distort and antagonise. For Do I Seduce You? I created three 3m x 3m paste-ups: Temporary Puddles, Seductive Slot and They are all Queer.

These works were derived from selfies that I had printed, cut out, collaged, scanned, digitally edited and then reprinted again before I glued them to the gallery wall.

By the time the process was complete, I had detached from them as recognisable images of me. I didn’t see them as self-portraits, they became entirely their own entities who evolved a life of their own.

Their evolution was like a visual journal of my own queer journey. This process revealed self-truths which are now reintroduced to the viewer/voyeur as a new composition.

They were reintroduced to me as well; as I never know how they will turn out.

In the six months leading up to the show, I was able to do a small residency at Pirrie Space, Fannie Bay.

There, I experimented with ways to incorporate graphic design elements into traditional murals. In doing this I invented ‘codes’ and a ‘key’ for my exhibited works. 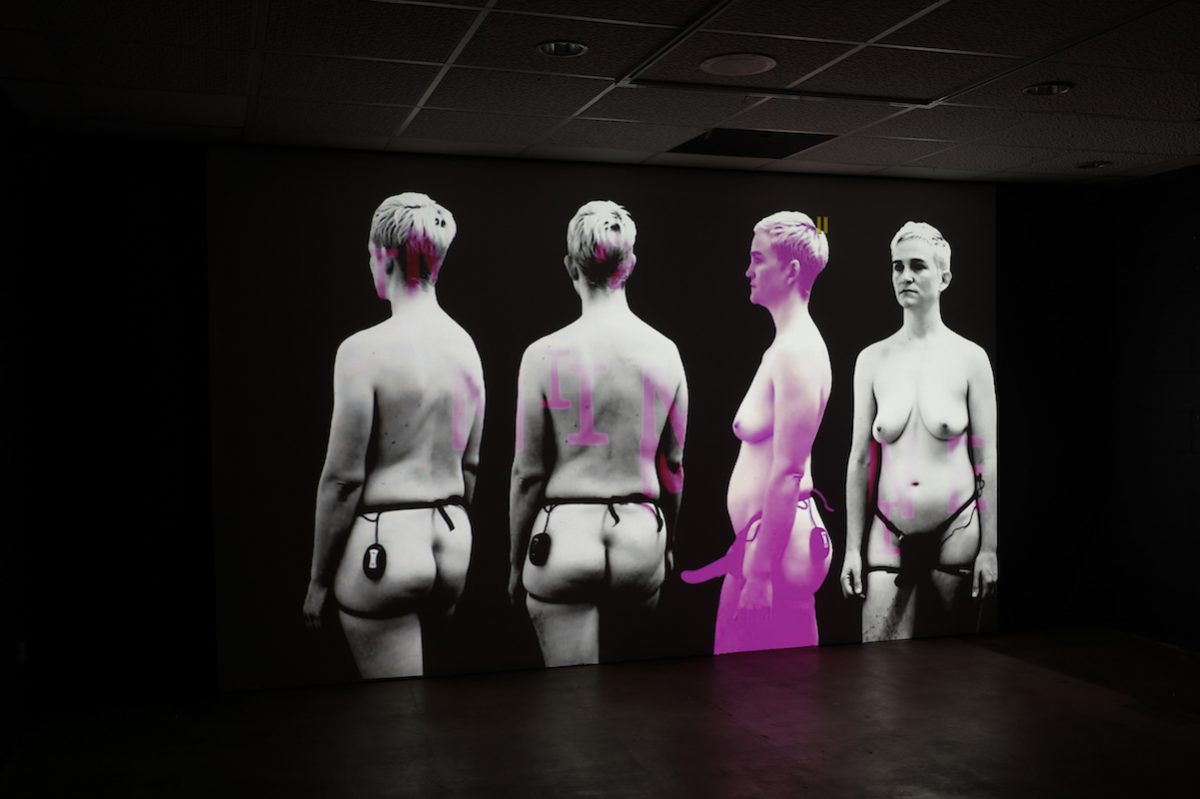 CA: That sounds like an interesting invention. Tell me more about these embedded ‘codes’ and ‘keys’.

TJQ: The ‘codes’ were the visual elements or techniques I used to form my artworks. They represented a different theme or concept that I wanted to explore.

These included transparent layering to represent the nature of the non-binary body, dripping mediums to represent fertility, and a coded colour pallet to represent concepts of feminism, patriarchy and the purging of toxic masculinity.

The ‘key’ was the symbology used throughout the show. Each separate image represented a theme such as masculinity, fertility and queering the family. The code was the ‘how’, the key was the ‘what’.

By using the codes and keys I had invented, I was able to respond to the space in that moment.

CA: Something I noticed at the exhibition opening was that Do I Seduce You? created a space for Darwin queers and gender non-conforming people to converge, to see and be seen in a town where this is a rare occurrence.

How important is it to you as an artist to cultivate spaces where LGBTIAQ+ people can gather in this way?

TJQ: It’s so important. I can’t describe the love and support offered by our queer community and allies in Darwin during this exhibition’s execution.

Throwing both an exhibition, [and an] opening and closing party created a jubilant queer space where we were not only seen but celebrated.

By presenting a boldly queer exhibition in Darwin’s renowned Northern Centre of Contemporary Art (NCCA) gallery, located nearby the popular Parap markets, I was able to lift the profile of queer contemporary art in the Top End for both local and visiting audiences.

I loved the thought that LGBTIAQ+ folx could stumble across the exhibition after grabbing a laksa and get a nice surprise − visibility!

I believe art spaces and galleries have the potential to play an important role in creating welcoming places for queers and the LGBTQIA+ community.

They are generally more accessible to the whole spectrum of our community. This includes families with young kids, older people and queers with a disability.

One reason is because they are open within the daytime hours. This is something that traditional queer spaces, such as nightclubs and bars, are not.

I invited everyone to expand their imagination of the diverse and wonderful possibilities of gender expression and identity.

It was bringing the personal and vulnerable to the fore; and promoting discussion, inclusion, and collective re-imaginings.

Carmen Ansaldo is a curator, writer, activist and arts worker based in Gulumoerrgin (Darwin) on Larrakia land.