Q&A with Alok Vaid-Menon of Darkmatter 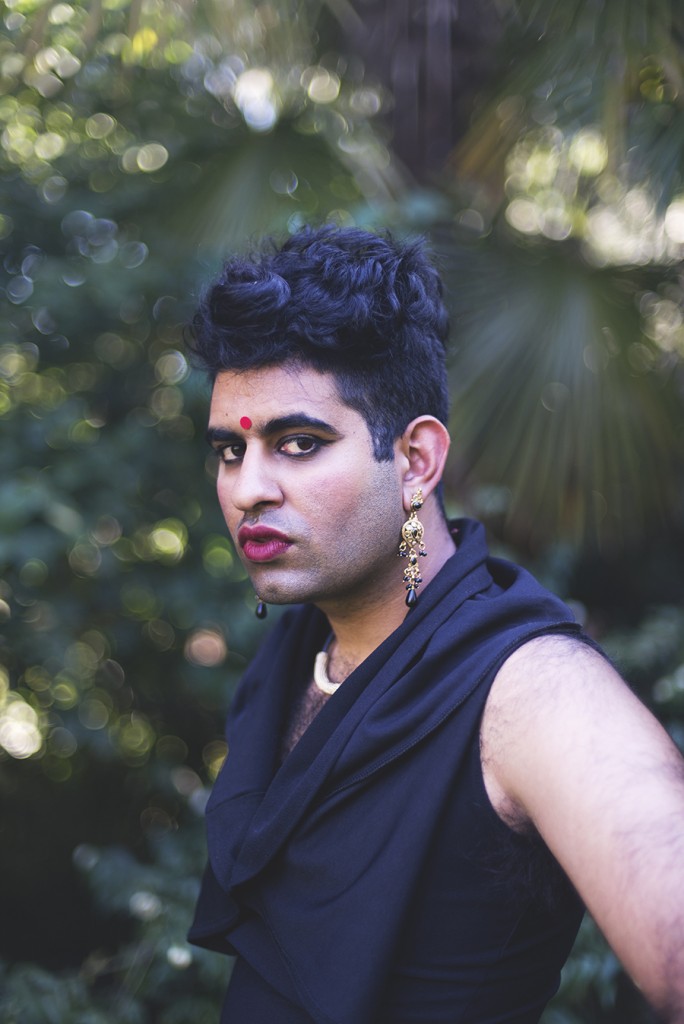 Member of poetry duo Darkmatter, Alok Vaid-Menon, chats to us about performance, faggotry and being freakishly queer.

This is an excerpt from Archer Magazine #7, the THEY/THEIRS issue.

Q: How has your trip to Australia been so far?
Politically and racially, everyone has a different idea of what’s going on here. US frameworks around race, identity and power don’t map well here. I’m left with way more questions than answers.

Q: Many binary trans people entirely reject the gender they were assigned at birth, which works for them. Being non-binary, though, tends to involve a fluidity and multiplicity of genders. Where does maleness sit with you currently?
It’s so messed up that transness is always understood as a rejection of who and what we were. Why can’t I hold that in some spaces I might be gay? In my culture, it was negotiated much differently. The lines between who was trans, gay and queer were not as finite and fixed. They were always flexing based on context.

If, for example, the only way my mother can explain me to my Indian aunties is, “My child is gay”, I don’t see that as misgendering. I see that as a culturally specific way to introduce difference.

I’m less interested in what words people ascribe to my body and more interested in how they treat me and how safe they make me feel.

Q: Do you still identify as gay, given that being non-binary complicates the gender uniformity that homosexuality implies?
Publicly, I feel there’s often no space for gayness and transness to exist simultaneously. In private, though, of course they do. I think the difference between sexuality and gender is such a fiction, specifically a love story of who gets to be desired, and who doesn’t. If you narrate yourself as gay, you become seen as desirable because your femininity is regarded as an addition to your masculinity.

Whereas if you identify as trans, your femininity is foregrounded and then you become hyper-visible and hyper-erased at the same time. In a misogynist world, people are taught to desire masculinity over femininity.

Trans people are always regarded as political subjects, but never romantic or desirable ones.

Q: Talk to me about the ‘faggot’, or the ‘failed masculine’.
I love faggots. Modern gender was created as part of a colonial project that decided what a real man and woman should look like. People with different genders who didn’t fit into a western conception of the gender binary became seen as failures, or ‘faggots’.

White histories of gender tend to understand faggotry, effeminacy, and transfemininity as something that can only exist on the stage, always as a parody of cis womanhood, whereas in brown and Black histories, faggotry can be a political practice.

In South Africa, for example, faggots were on the frontline of the anti-apartheid struggle. I think we need to flip the script from failure to success: being a brown faggot/femme/tranny is wonderful, because I’m failing to uphold white supremacy.

Q: How can we shift the narrative of transfeminine people of colour away from tokenism and aesthetics, and onto the violent reality of our experience?
Often at my performances, especially when I’m performing internationally, I’m one of the only
transfeminine people of colour in the room. It’s as though the only possibility of someone who looks like me is in a performance context, which feels so explicit.

We have to push beyond the face-value to actually embracing trans people, and especially transfeminine people of colour, in our entirety, and not just what we look like. I often ask, “Do you care about us when we walk off the stage onto the street?”

There’s this thing that happens where we come for the aesthetics, but we don’t stay for the politics, as if aesthetics and violence are separate. For many of us, how we look is the reason we’re policed, and the reason we’re seen as controversial.

Q: At the same time, the freedom to vary how we present is so important to so many non-binary people.
When it comes to the question of aesthetics and transfemininity, what happens is that transfeminine people are blamed for being narcissistic and vain, and our work is reduced to the consumption of make-up and clothing. I hate that; it’s such a misogynist and especially transmisogynist conversation.

We live in a world that literally tells us we are ugly. Often there are no support networks besides our own self-worth. Vanity becomes the only way we can survive.

To read the full interview, buy the THEY/THEIRS issue of Archer Magazine.