Drag and gender: Performing as a non-binary human 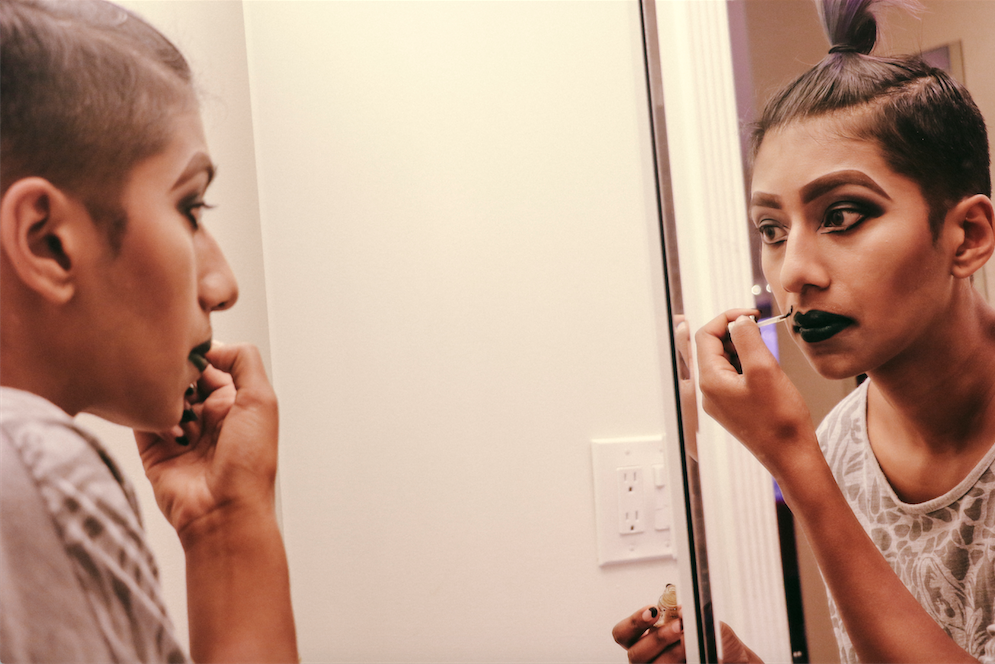 I was backstage at a show recently and a drag queen gushed that she’d been looking forward to meeting me. She said that I was super talented, and very ‘fishy’.

My smiling face turned to confusion, and I realised she thought I was a cisgender man, and she was praising me for impersonating a woman so convincingly, as though I had a vagina. And I do.

I used to stay away from drag shows, because I had the impression that drag was simply gay men in dresses, making impersonations of women based on harmful stereotypes.

As a baby bisexual going to queer bars in Melbourne, I was always relegated to the role of ‘fag hag’. The gay men around me, who enjoyed watching and taking photos of drag queens, treated women in these spaces like handbags, and certain bars wouldn’t let women inside if they weren’t accompanied by gay men.

It seemed being femme was only okay if it was theatrical, and I wasn’t interested in a scene like that.

Things changed when I moved to San Francisco and learned about the resilience and activism of those who challenge the western gender binary, as well as its relationship to drag.

When I learned that drag didn’t have to be about upholding stereotypes, and that many performers are trans, non-binary, and deeply invested in activism and dismantling oppressive gender norms, I became intrigued.

This intrigue, coupled with my deep love of lip syncing, led me to enter the San Francisco drag scene as a non-binary, assigned female at birth (AFAB) person of colour.

The practice of dissenting from the clothing and expression assigned to your genitals (also known as ‘crossdressing’) has a history in the west of being criminalised and punished. A pioneer modern drag queen of San Francisco, José Sarria, would perform at a bar called the Black Cat in the mid-20th century. In response to his frequent arrests, he created a badge that said “I’m a boy” in an effort to skirt around the law that accused him of impersonating a woman.

There is also the case of Murray Hall, a New York bail bondsman and politician who, in 1901, tried to cure his own breast cancer at home, because he was unable to seek professional medical attention for fear of people discovering he was assigned female at birth. Upon his death, it was realised that he had a typically ‘female’ body, and he was buried in women’s clothing.

These binary categories are a mainstream understanding of drag. Many drag performers lament that the focus on ‘passing’ as a binary gender is not representative of their experience of the art. Passing, or ‘fishiness’, is a stereotype perpetuated by popular reality TV show RuPaul’s Drag Race, and, as result of the show’s popularity, often becomes a standard by which many queens are measured.

It is not only limiting to drag performers to evaluate them on their ability to ‘impersonate the opposite gender’, it also upholds violent assumptions about trans people.

The emphasis on adhering to binary ideals of masculinity and femininity puts the idea of ‘passing’ on a pedestal, and leads to a culture where we punish folks who don’t conform to society’s notions of what men and women are.

This creates an environment where, since there is a particular way to ‘be’ a man or a woman, trans people, particularly trans women, are interrogated and unsafe unless they fulfil society’s criteria of what a woman should look like.

This is a double-edged sword, because if drag is all about impersonating the opposite gender, but being your ‘real gender’ when you’re off the stage, it sends the message that trans people are performing and deceiving wider society as well.

The rigidity of this binary is also a product of white supremacy. I had a wonderful collaboration with a South Asian friend who approached me to help with his debut as a drag queen, for which he was performing the 1970s Bollywood hit Piya Tu Ab To Aaja.

I was delighted – being of Sri Lankan descent, I had been very keen to explore drag in a cultural context that aligned with the way the colour of my skin was perceived. I wanted the challenge of embodying a form of brown masculinity, which can involve being more feminine and moving one’s body differently than say, ‘white American masculinity’ or ‘African American masculinity’.

To suggest there’s only two binary ways of doing drag is to suggest that western beauty standards, and cultural ways of acting like a man or woman, are the only forms of gender expression.

In my experience, many drag performers embody a revolutionary gender fluidity, and gender multiplicity. To me, drag performance feels like a reclamation of gender expression – a hyper-awareness of oppressive structures that are taken and played with to create art, income and community.

Some drag performers are transgender, and the relationship between trans and drag communities varies from place to place. Kate Bornstein, an author and historic figure in queer and trans communities, writes in her blog about how she learned from Sydney-born drag queen Doris Fish that “in Australia, from the 1960s through the 1970s, most all of the male-to-female spectrum of gender outlaw [e.g. trans women] began their transition in the fabulous world of sexy, over-the-top drag performance.”

Bornstein reflects how this contrasted with the scene in San Francisco, where she felt that trans women in the 1980s “considered drag queens beneath them. The drag queens were amused by the MTFs [male to female] pursuing the dream of real woman[hood].”

Being non-binary, any and all gender expression can often feel like ‘drag’. Just getting dressed for the day feels like gender play, being aware of constructs and norms and deciding how to express yourself within them.

I’m surrounded by, and very involved with, San Francisco gay male culture, and in a world of twinks, bears and leather daddies, drag is my safe space. Drag seems to be the space for us genderqueer folk in this culture who aren’t trans men, nor women, but aren’t entirely cisgender either.

Performing in drag is also where I’ve felt most seen as queer. I’m often read as heterosexual, cisgender and binary, which comes with privilege in certain arenas but also a whole heap of invisibility, erasure and not quite belonging. 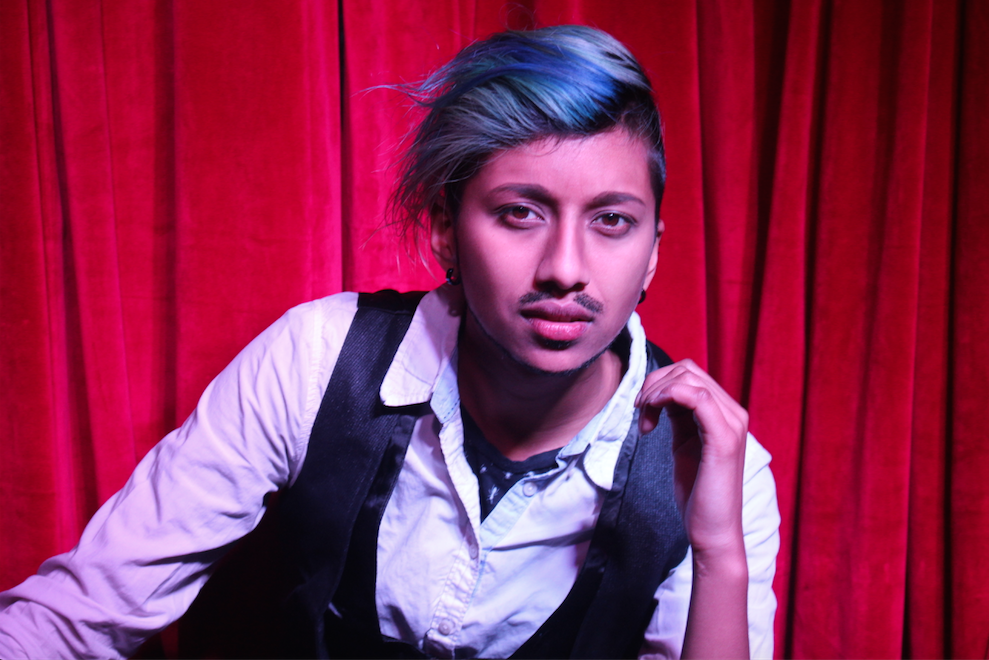 One of the times I’ve felt most seen is when my partner and I did a drag duet. Coaching each other on how to incorporate more masculine and feminine aspects into our drag personas, we performed the ’90s hits Steal My Sunshine and Tubthumping.

I got my butch on and took up space as ‘Dani Boi’. He wore a denim dress, plastic choker and cowboy boots as ‘Beth Western’, and, in that moment, we went from a straight-seeming couple to a gender-bending duo, our queerness worn on our sleeves.

Grace Towers is a San Francisco queer nightlife curator and ‘bearded queen’. When chatting with her about breaking down binaries through drag, she described how she loves to “counterpin hyper masculinity with hyper femininity” and be a “bombshell moment for people who have never seen such extremes in one place”.

One of her daughters, Anomalia Towers, shared with me that a fellow queen told her she could never attain “high drag” with a full beard. She hasn’t let this stop her.

For Willard, a non-binary human and fellow drag performer, drag is “a creative exercise with no boundaries – you can do whatever you want”. They tell me it’s a vehicle of self-expression, and that they use the term “drag” as a reference point, so people can make sense of them as a “big scary man in make-up, because big scary men aren’t supposed to wear make-up”.

As an assigned male at birth (AMAB) drag performer who is read to have a typical ‘drag queen’ aesthetic, Willard often finds themselves between a trans community and a cis gay male community. There can be an experience of privilege in being read as cisgender or heterosexual, and a sense of being caught in the middle, not quite accepted or understood by either community.

Willard has pioneered the hashtag #drag #butnotdrag, which has inspired myself and other performers, to “give a reference point but create a new space” for those who don’t really see drag as something they can slip in and out of, but rather, something that is an extension
of themselves.

Jacob Thomas, aka Perry Shables, a Melbourne-based non-binary human and drag performer, tells me that when they are painted and dressed, they feel more like themselves than at any other time. They also say they use drag to “tell stories, as a means of political farce and force, to comedically punch up”.

What Willard, Jacob and I all agree on is that drag has been incredibly important to us personally, and we wish it was accessible to more people. Willard likens it to a night out doing karaoke with friends – a space that isn’t rigid, and is created to make people feel good about expressing themselves.

Sharing a stage with performers like this has given me the confidence to keep carving out space for myself and my gender presentation. Like the ever-growing term ‘LGBTQQIAAPT+’, the queer community will keep creating new spaces and terms in which to be understood, be seen, push back on heteronormativity, and send out a bat signal to find other people like us.

For me, that bat signal is drag.

When I’m contouring my face and applying exaggerated make-up, I’m not a ‘faux queen’, I’m Dani. When I’m gluing hair clippings on my face to create a beard, I’m not a ‘drag king’, I’m Dani.

And when I’m wearing make-up and facial hair while sporting lingerie and mangerie (men’s lingerie), I’m not sure what people perceive me as, but I’m still Dani.

I’m grateful to have learned that drag is an umbrella term that encompasses much diversity, and the ability to bust the binary and create more possibilities for gender expression. Drag is whatever you want it to be, and everyone is welcome.

Dani Weber is an event organizer, workshop facilitator, and a nonbinary drag performer known as Dani Boi. They lived in San Francisco for 1.5yrs where they worked an an LGBT+ rights historical walking tour guide with Wild SF Tours. Since returning to Melbourne, they have performed at a variety of queer events including Midsumma Horizon, Honcho Disko and Oyster Club (Sydney). They co-produce the Cocoa Butter Club, a performance night for Indigenous and/or People of Colour, and run anti-cyberbullying workshops in schools with PROJECT ROCKIT. Follow them on Instagram: @afab_ulous