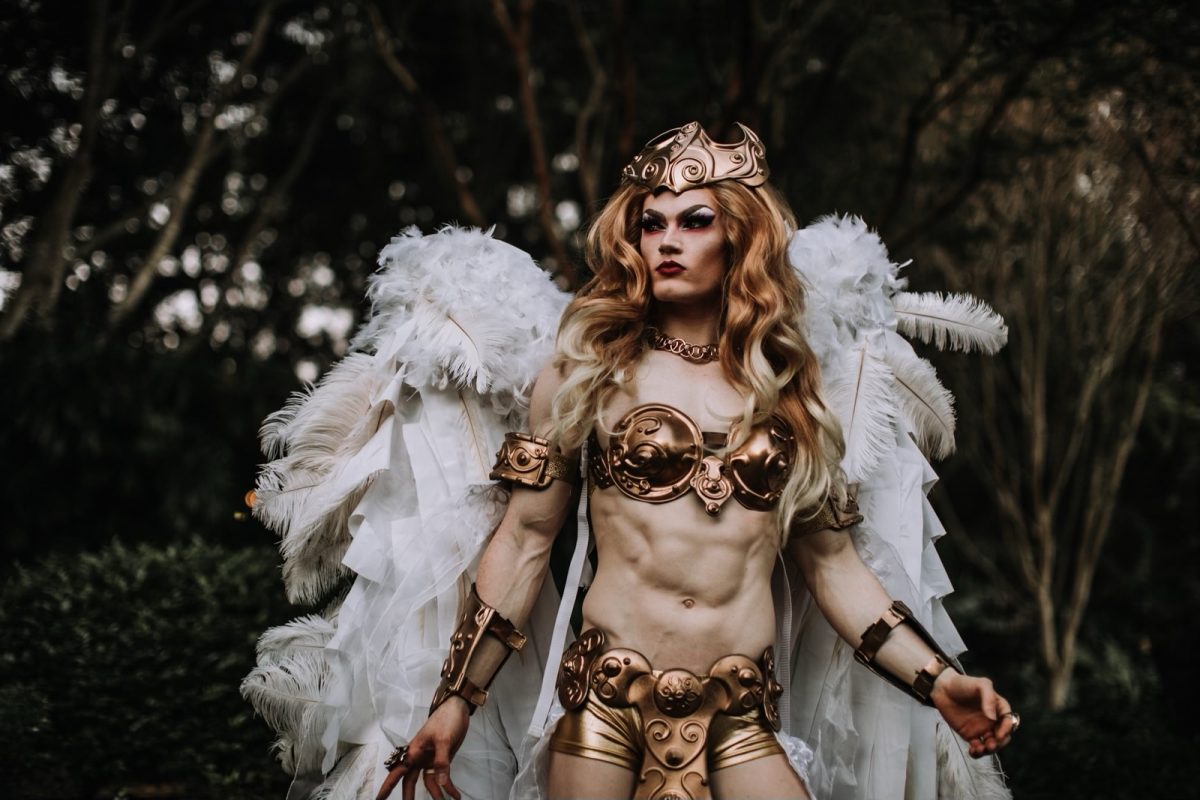 In October 2021, I became one of the world’s first bodybuilding drag queens when I competed in International Natural Bodybuilding Association (INBA) Global Australia’s Pro/Am, at Nissan Arena in Queensland.

Although there are other drag queens who have competed in bodybuilding competitions, to my knowledge there has never been a drag queen to compete while in drag.

This makes my endeavour a world first.

With my face and hair in full drag, I wore the square-cut Speedo required for ‘Sports Model’ and boardshorts required for ‘Physique’.

After competing in these categories, I changed my hair and put on my angel warrior costume and wings to showcase a new INBA category – ‘Men’s Theme-Wear’. I’d spent 9 months making this outfit, including an impressive set of handmade, mechanically-articulated wings.

With the help of my grandma, I’d also made a set of angelic metallic armour with organza ribbons. People are always shocked when I tell them my grandma sewed my costume.

My family all fully support me, and my grandma often helps me make my costumes, which makes them very important to me.

Unfortunately, I wasn’t able to compete in the INBA ‘Angels’ category as it’s only for women, and I identify as male. The ‘Angels’ category isn’t strictly a bodybuilding or physique category, it’s largely about look and presentation.

Personally, I couldn’t see a problem with everyone competing in this category together, but I suppose it was lucky for the other competitors that I couldn’t compete because I was coming to snatch trophies! During my events, the commentators even said: “If he was in the ‘Angels’ category, he might possibly win that one,” and, “He definitely has put a lot of great effort into his physique and the costume.”

After my showcase in the new ‘Men’s Theme-Wear’ category, there has been some interest from other male athletes in competing within it, and INBA is now planning to introduce the category officially next year.

Some people may think that I competed in drag as a joke, but the truth is quite the opposite. I’m a serious competitor, and have wanted to do a bodybuilding comp for about four years.

There are still so many spaces that feel off-limits to LGBTQIA+ people who wish to enter or engage in them. A lot of these spaces are traditionally cisgender- and heterosexual-dominated environments. This is often the case in sporting environments.

It’s often assumed that being gay means we don’t like sports at all, but that’s definitely not true for everyone. For some queer people, the claim that we don’t like sports is used as a means of protection: if we can convince ourselves that sport just isn’t for us, then we can also convince ourselves that we can’t be hurt by being excluded from it.

I competed in drag to promote queer visibility and to show everyone that queer people are allowed to have passions outside of the status quo, and that they should be taken seriously and accepted when they do. I also attended my university graduation in full drag, with the aim of promoting queer visibility in professional and academic environments. It was something that meant a lot to me; I want my community to be seen, accepted, and celebrated in all spaces they wish to enter.

On the day of the competition, I was pleasantly surprised by the overwhelming level of support from my fellow competitors.

In particular, having the support from many of the male competitors meant a lot to me. I didn’t have a single negative thing said to my face on the day. They recognised that I was a serious competitor, and thought it was cool I was doing it in my own way. 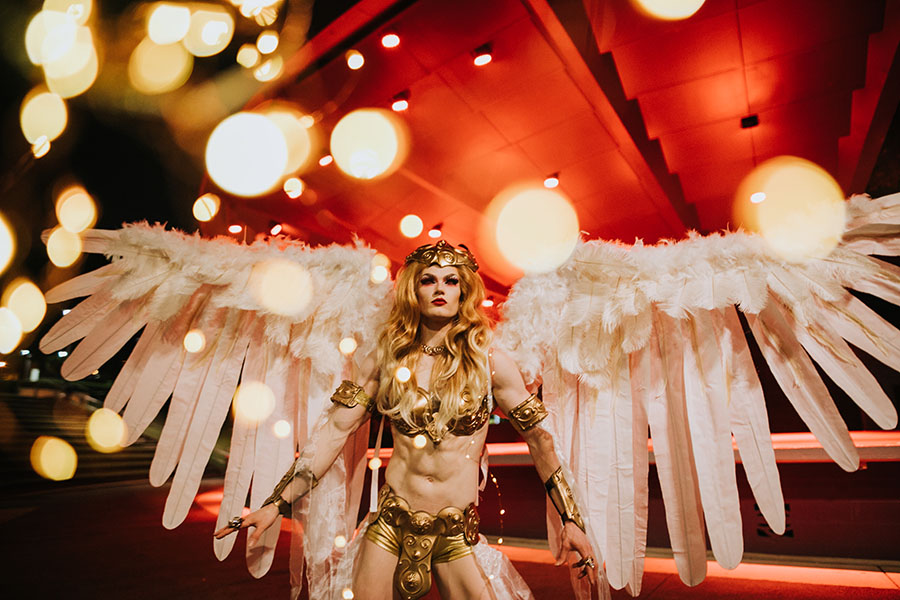 The conversations we had were very standard: talking about our post-comp feeds and congratulating each other after being on stage. I felt very accepted and included in this environment.

The crowd watching at Nissan Arena also seemed supportive. I like to think that my performance challenged a lot of people’s perceptions of queer people that day, making them realise that stereotypes shouldn’t be taken so seriously.

Despite the overwhelmingly positive response, my participation in the bodybuilding comp in drag still wasn’t accepted by everyone. In the weeks leading up to the comp, I ended up in a battle with a homophobic couple who formed a vendetta against me and went to extreme lengths to stop me from competing.

They found my contact details and harassed me over the phone. “We have no problems or qualms at all with anyone’s lifestyle,” they said at the beginning of the call.

“It’s not really a lifestyle,” I quickly corrected them. “I was born this way. It’s not a choice.”

They tried to bully me into not competing in drag by telling me that I would be turned around if I tried to go on stage with my makeup on. Then they hit me with this: “I’ve got first timers, I’ve got sons, and they won’t go on stage if they had a drag queen in their photos, with their mates watching. They won’t like it, it’s embarrassing.”

From this interaction I couldn’t help but think that these people were out to discriminate against me, and that perhaps their views were also supported by other homophobic people in the industry.

INBA also received some backlash and hate before the bodybuilding competition, but they shielded me from a lot of that. The INBA came out in full support of me, and went to great lengths to help me compete in the way I wanted to compete.

In particular, my coach and INBA Australia President, Michael Waddington, has been extremely supportive of me. He has personally shielded me from a lot of the backlash that has been generated, but also assured me that the vast majority of people he talks to are very supportive and don’t have an issue with me competing.

From my own experience, it seems anyone who is opposed to me competing in drag is in the smallest of minorities. Those people can either educate themselves or get left behind.

After my unpleasant phonecall with this couple, they eventually began to back down. The competition went ahead as planned, with no problems arising on the day.

The feeling of defying these homophobic people was so empowering. It made me remember the importance of what I was doing.

A large part of the reason I wanted to compete in drag was to stand up against any homophobia in the industry, and to stand proud as a serious bodybuilding competitor and member of the queer community.

To have the full support of Mike, the INBA, and the broader bodybuilding community during this battle was very touching, and an act of solidarity that I will always appreciate.

They are the people paving the way for an inclusive industry for everyone, and helping to build spaces that welcome LGBTIQA+ people to be themselves and participate.

Jake Donovan-Parker by day (or Tara Zann by night) is a bodybuilding, drag queen engineer. Jake grew up in northern NSW where his queerness was repressed by extreme homophobia. Moving away to Brisbane for university allowed him to come out as gay and since then he has taken pride in being visibly queer in the hopes of showing others that it gets better and that it is ok to be yourself.