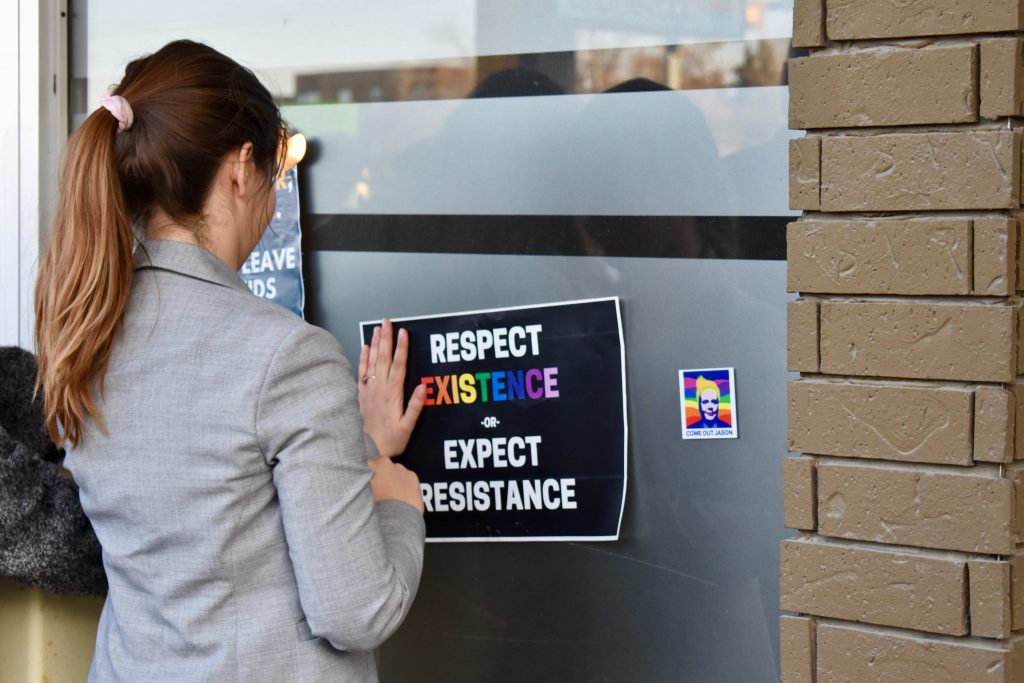 I felt the need to shield my screen the other day. It was my lunch break at work and I was reading an article about the world of lesbian dating on my work computer.

I had the screen minimised and my cursor hovering over the tiny x in the right hand corner.

If I was reading a straight dating article I wouldn’t have thought twice about it being full screen; in fact, I probably would have been discussing the content with my colleagues.

But a lesbian article…it somehow felt NSFW. This lead to a stream of consciousness about all the times I had censored myself when discussing anything queer.

As my boss walked near me, I jumped to close the article I was reading.

Annoyed with myself, I decided to list the times I had felt that the oversexualisation of queer words had created a sort of “hush factor.”

I started to think deeply about how that self-silencing made my identity feel fetishised, how the mention of bisexuality felt inappropriate in a work environment.

The red flush that rises on colleagues’ faces when the word ‘lesbian’ or ‘bisexual’ is mentioned is like a cue for me to feel ashamed and embarrassed to mention my identity.

There are particular moments burned into my memory.

One was when I overheard a teammate make up an alternative story about why I had been out of the office one Monday, hiding the fact it was because of the Mardi Gras.

After the conversation ended, I asked why they had made something up and they whispered “I figured you wouldn’t want people to know.” I remember my face burning with both rage and shame. I didn’t bother saying anything in response.

I’m a femme cisgender bi woman and because of that I am nearly always assumed to be straight. This means that coming out happens on a very frequent basis for me, usually followed by the phrase “but you don’t look gay.”

The idea of “looking gay” is not an original one; sexuality is often quickly judged and guessed by one’s clothes, haircut or the register of their voice.

On the flip side it can often feel as though there is an obligation to look queer, as though I must be ashamed of my sexuality because I am not overt in my presentation.

I realised I subconsciously censor myself, allowing the assumption of straight until a direct question undoes the façade.

I’ve seen it many times in many jobs: the man who forces himself into a deeper register whilst in his work suit, only revealing his sexuality openly outside the office walls. It was as though his work suit tied him to heterosexuality and it was safer there.

This is an alarming statistic, especially considering the fact that we spend more time with our work colleagues than with anyone else yet feel unsafe revealing a core part of who we are.

I catch myself censoring my own words, careful not to mention things that might make people uncomfortable. I do it because I want to be taken seriously in the workplace. I don’t want my name, appearance, gender and sexuality to be the butt of “can I watch” jokes as it has already been so many times.

Discussing my sexuality makes me feel uncomfortable because of people’s reactions to it, not because of who I am. Unpacking this self-censorship, I thought about my last job where I didn’t come out for four years.

When the information did surface, it was against my will. I was outed by another colleague, a situation that 21.7% of LGBTI people experience. It was a heartbreaking experience, and something I never want to have happen again.

I was so protective of my identity. The secrecy was not because of shame but because I didn’t know how to bridge that conversation. It felt inappropriate to speak about.

Even today, there are jokes around with queerness as the punchline. The very fact we still have to call people out for saying “that’s gay” is an absolute farce.

In those moments I find myself conflicted. Do I say something? Do I interrupt the joking and highlight the offensiveness, bringing attention to myself, or do I just remove myself from the situation?

I’m determined to call it out. I am getting better at it but I have to call myself out too. I have to stop dropping to a whisper when I talk about being bi.

I have to nip assumptions about my sexuality in the bud so that maybe the language will change for the next queer person. I would love to see the day when people say partner instead of husband or wife, and I have to lead that within my own world.

Yesterday, I pinned my rainbow love sticker to my office cubicle wall, the one I had been carrying around in my work notebook for months.

It was my subtle and private symbol, tucked away from view, an unintended secret.

Now pinned to my wall, that rainbow has become a visual cue, reminding me to speak a little louder and shine a little prouder because I refuse to let queer censorship continue to be perpetuated by me. Queer is not a dirty word.