Hair and identity: Developing a femme aesthetic of queer diaspora 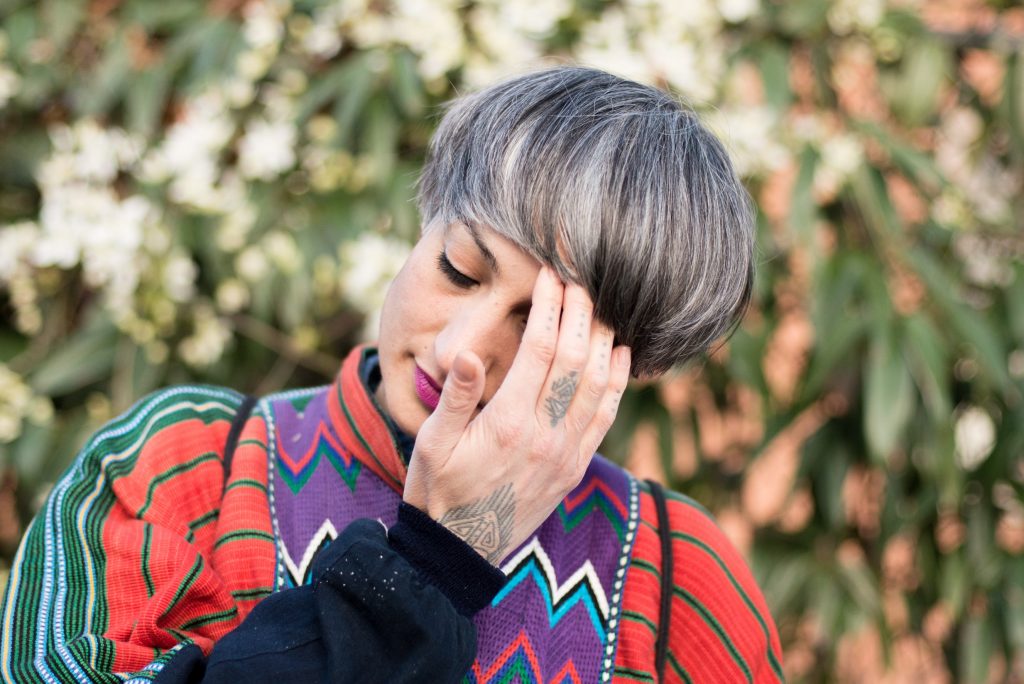 When I was 17, I cut off all my hair for the first time. I was freshly out of high school, freshly queer, and thrilled by the promise of finding queer community at university. I remember nervously holding my own gaze in the mirror as a hairdresser, with a magenta undercut and pierced septum, asked “Ready?” while already starting to snip.

I was terrified. The initial cut felt both shocking and freeing, like a vital ticket into a community I craved. This is now logged in my mind as the “queer haircut” memory, a common rite of passage.

But for me, that move came with consequences I hadn’t expected. Surprisingly, my new hairstyle downplayed the visibility of my racial identity, showing the inextricable connection between my queerness, and my experience of having a non-white body.

I‘m biracial – half Indian and half Anglo-Celtic – and was born in Australia. Growing up in a body that people have trouble racially categorising has meant constant questions about where I come from, constant sexualising of my ‘exotic’, hard-to-place body, and a constant feeling of instability in my own racial identity.

Like lots of mixed folks, I’ve often felt like I don’t fit. I feel culturally inauthentic and ‘too white’ for Indian diasporic community spaces, but I also feel I have to distance myself from my Indian family and culture to fit in elsewhere, including many queer community spaces and events.

More than anywhere else on my body, the tension and emotion of being a cisgender queer person, who is mixed-race and mostly femme-presenting, come together at the site of my hair. That first queer haircut definitely achieved its goal, affording visibility and increased recognition from other queers in public spaces – what a friend calls the ‘lesbian head-nod’.

What I also noticed, though, was a reduction in the “Where are you from?” questions. This was paired with diminishing acknowledgment from South Asian folks in public, and comments from my pati and her friends about my “modern” and “interesting” hair.

Deliberately queering my aesthetic by cutting my hair then also felt like a loss – a strange hiding of race. Coding queerness in my appearance rendered my brownness less of a question.

These collisions indicate, of course, our widespread cultural failures to think intersectionally – the failure to make space for queer, short hair and authentic brownness to co-exist, and the failure to conceive of queerness outside white Western aesthetics.

For me, these collisions were also wrapped up with reconciling mixed-race femme presentation as legitimately desi – a self-identifying term used by many people in the South Asian diaspora –  and legitimately queer.

My hair is now long, and hangs around my face in dark, ragged curls that frizz and morph with changes in the weather. Each strand is thin but there are many of them, and a visit to the hairdresser wouldn’t be complete without at least one mention, in a tone somewhere between impressed and exasperated, of its extreme thickness and weight.

I rarely brush it, still recovering from years of soaking my hair in conditioner and detangling spray, then dragging through pink plastic brushes until my scalp felt like it was splitting open.

Now, I’ve replaced detangling spray with coconut oil and kalonji oil, sourced from South Asian grocery stores many suburbs west of the queer heartland where I live. In these shops, I feel like a fake, worrying that the cashier will read me as a white girl appropriating desi culture, or that I don’t have enough cultural knowledge to be there.

As a teenager, the smell of coconut oil made me gag, reminding me of the Indian girls I sat next to in Tamil class as a child, who seemed so off-puttingly Indian (as though it were a solid category that I could keep separate from me).

When I was 16 and newly queer, I so desperately didn’t want to be like them. Now, I lather my hair in coconut oil as a crucial part of what mixed desi femme writer Leah Lakshmi Piepzna-Samarasinha would call my ‘brown girl arsenal’.

White queers praise to me the benefits of coconut oil as their own DIY anti-capitalist method, but for me, applying it is a decolonial feeling. The product reminded me of my mum and my pati long before connotations of food co-ops, vegan baking and DIY deodorant, and the smell is good for healing my heart from the sting of racism, as well as healing my dry, split hair strands. 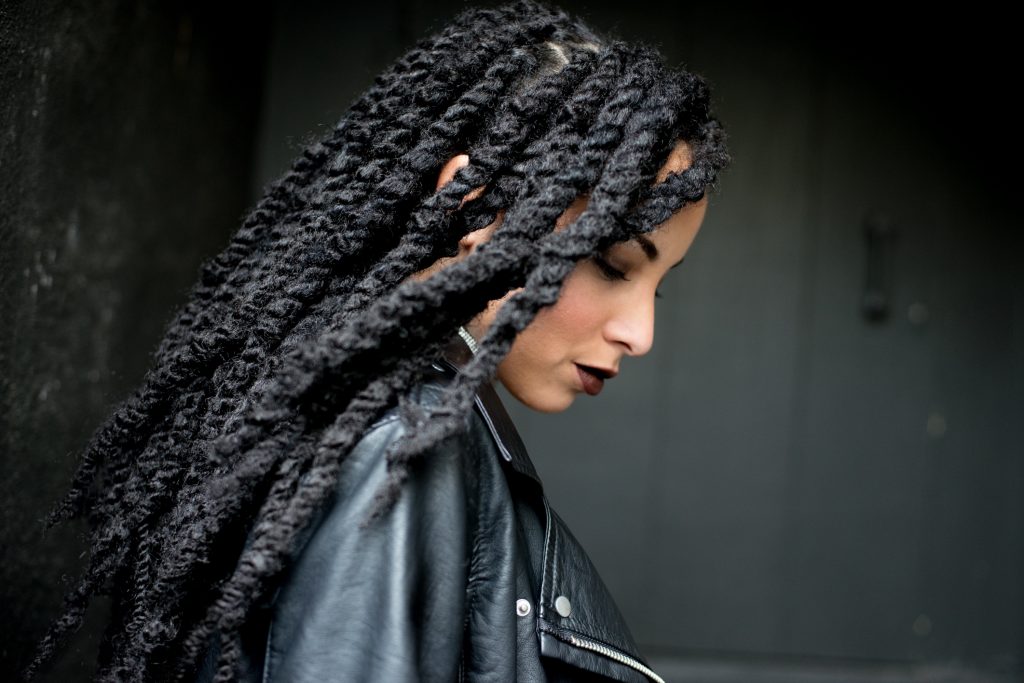 Queer women of colour are often torn between cultural and queer modes of representing the self. Photo: Kale Chesney.

Even now, thinking about cutting my hair sparks a stand-off between my queerness and my brownness. I think frequently about how much more visible I feel as a person of colour and as desi when I have long hair. On a body that feels like it doesn’t clearly code what it is, with olive skin and greenish eyes, I’ve always felt like my hair, at least, has a decidedly Indian thickness and curl.

At the same time, I have occasional pangs of wanting to cut it all off, feeling like my current hair hides my queerness – femme queer invisibility, made worse by brownness.

Growing my hair out made me feel more Indian, and for a long time, that felt uncomfortable because I didn’t want to look Indian. It’s exhausting to be asked constantly where you’re from, and to be told by creepy white men that you look like an exotic princess.

It’s also exhausting to hold self-hatred and shame about looking ‘too’ Indian, because you fear you’re a fake, inauthentic, only half and also because you’ve grown up in a culture that taught you Indian femininity is gross, unattractive, backwards and, crucially, heteronormative.

In my youth, white-dominated Australian society taught me that magenta saris and sparkly bottus and bangles and thick hoop earrings in gold Tamil style represented tradition, heterosexual arranged marriage, and conservative values, rather than the queer femme revelry they could also connote.

I felt – and sometimes still feel – ambivalent about looking desi femme, because it looked too straight. But on another level, the ambivalence was about feeling deeply that I would fail. I feared I could never perform the beautiful, elusive Indian femininity I see in photographs of my mother in her twenties, because I’m weird and queer and untamed, have hairy armpits and light skin that most people think is Latinx or Lebanese, but definitely not South Asian.

I both craved and hated Indian femininity, seeing it as utterly straight, and also exactly the kind of queer I wanted to be.

If these feelings seem clashing or paradoxical, that’s how they feel to me, too. I’m learning that racism and queerphobia gather a lot of power from creating contradictions, making queers and people of colour feel paranoid, crazy or at fault when they’re strung up among seemingly irreconcilable paradoxes.

Physical intimacy is a particularly loaded site of negotiating race and queerness, where bodies collide unpredictably and vulnerably with each other in care, sex and love.

I recently fell in love with another diasporic queer person for the first time. On one of the first nights we spent together, they traced the curls of my hair in dim lamplight, smiling a glittery smile as they whispered “this hair…”

We have very different diaspora stories, and very different experiences of race. But as they pulled each curl like it held a precious secret, somewhere in their whisper I felt a sense of profound mutual recognition of what it’s like to be stretched between clashing cultural codes and mistranslations, untranslateability.

I felt the recognition that bodies can hold invisible travel routes, stories of love that come from places that are impossible to return to, and multiple spaces of belonging that might never be reconciled.

My hair offers me continual reminders that race and sexuality are mapped on the surfaces of the body in intersectional ways. They don’t stay still; they collide and shift with changes in our bodies, collisions with other bodies and the spaces we move through.

Identities are very malleable things, but the body has a certain indisputability; its material form can be altered considerably, but not infinitely.

In queer spaces and cultures, we’re used to talking about how the body doesn’t always code clearly – that what you think you see may be very different to what is actually there, and people’s body parts don’t necessarily give you a roadmap to how they feel, or who they are.

Race works in similar ways. For me, it’s a slippery process of being read and interpreted, involving misrecognition, and repeated reminders that how I am read is not necessarily in my control, no matter how hard I try to code myself through aesthetics.

Increasingly, this is what my relationship to my hair feels like: letting irreconcilability exist as the basis for identity. I blast Bad Girls by M.I.A while I oil my hair and find pleasure in its thick, brown wildness.

Jaya Keaney is a PhD candidate and tutor in gender studies at the University of Sydney. Her PhD thesis is about race, assisted reproduction and queer families. Her recent interests include revisiting Sleater-Kinney’s entire back catalogue and planning DIY garden projects she might finish one day.