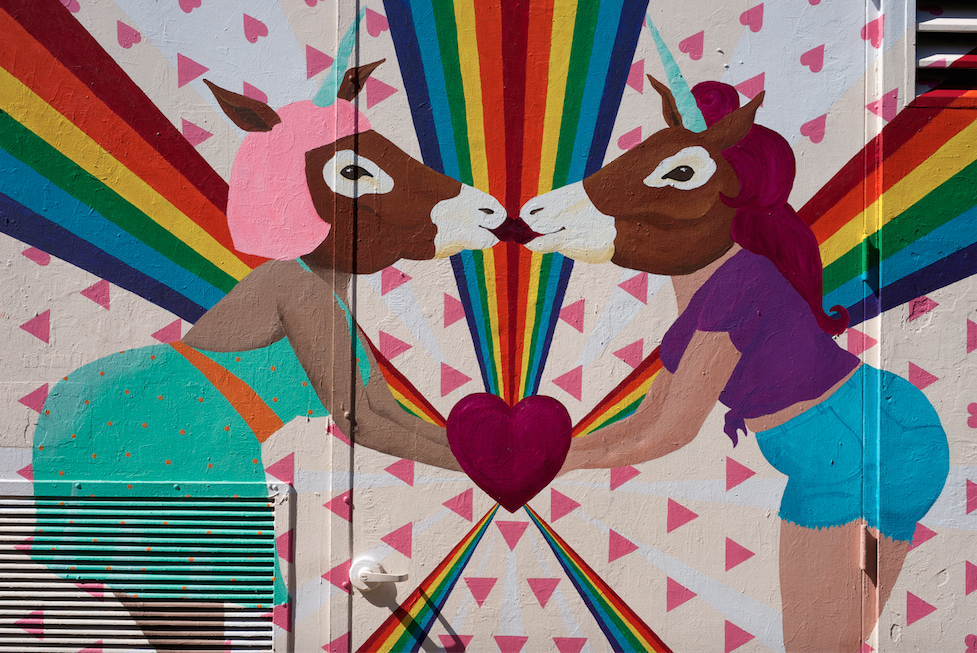 Late last week, my partner and I were celebrating our anniversary. I like having an excuse to dress up and feel fancy, and – if we want to risk it – leave our Newtown bubble to see what else Sydney has to offer.

We did venture out of the bubble, with minimal fanfare or occasion. So it was especially surprising that our return to Newtown was greeted with such an odd encounter.

We were enjoying a drink at a local haunt, when a woman approached us.

“I just want to apologise in advance for my boyfriend,” she started. “He’s a dickhead, and he eyed you two off as soon as we came in.”

I glanced at the boyfriend. More drunk than Tony Abbott on that night in 2009, this guy was having trouble standing, and apparently needed to grab onto his crotch for support to stay upright. Teetering over, one hand wavering, the other tightly gripping his prized possession, he stood behind me, muttering incoherently.

At one point, he expressed his support for the “Sharkies” (I assume he’s talking about some kind of football team), and at another, his love of Justin Timberlake. Apart from that, the only other coherent sentence I heard from him was when he asked me, genuinely quizzical, “Do you know my name?”

Still unaware exactly what this woman was apologising for, it became increasingly apparent that it wasn’t her boyfriend that was going to be the one bothering us.

She sat down next to us and began chatting, first proclaiming that she and her crotch-wielding boyfriend were “the normallest people in Newtown”. I was really unsure where this was going, mostly annoyed that my drink had run out, but I couldn’t abandon my partner to head to the bar, and leave her to deal with this conversation alone.

Then it became clear.

“It’s our anniversary,” My partner replied.

“I knew it! We fucken knew it, didn’t we babe! We knew you were lesbians… well, you especially,” she nodded toward me, clearly the more butchy queer.

There’s nothing particularly offensive about this conversation, but my partner and I had been deep in conversation about literally anything else, and didn’t really want to spend our anniversary telling the “normallest people in Newtown” that yes, in fact, this is a date so maybe you should let us get back to it?

Besides, we’re too polite to say that anyway, so she carried on.

“No offence,” she began again, and I steeled myself to be more annoyed and awkward than particularly offended. “But I don’t give a fucking shit what you guys do, whatever, it’s none of my business, I couldn’t care less, love is love, you know?”

Her boyfriend, still blindly staggering behind me echoed “fucking shit, whatever,” and I took that to mean he agreed that love is, indeed, love.

She continued: “It’s a fucking waste of time, it’s a distraction, a waste of money.” She went on to list all of the ways that this was a distraction, from refugees, from housing, and I found myself agreeing with her more and more, getting into the swing of the drunken ranty conversation.

Then: “They’re doing this to make us forget what else is out there. Like aliens.”

“Up the Sharkies!” Her boyfriend warbled.

The conversation continued onto a wealth of other topics until, about 20 minutes later, we finally gutsed up, feigned a yawn and said, “Well, this has been great, but we’ve gotta go to bed. Nice to meet you!”

Her parting words shifted those 20 minutes into stark clarity.

I’ve been thinking about this encounter a lot since it happened. While it was mostly hilarious, and perhaps the best theory as to the distraction technique of the postal vote I’ve ever heard (because OF COURSE Turnbull is hiding Life on Mars with a vote on homosexuals), it also caused us to cut our night short, shorter than we’d wanted.

To some extent, I’m always concerned that I’m a target when I leave the house looking exceptionally queer. But with the postal vote, not only have we become an even more pronounced target of hate, we’ve also become a hot topic of conversation. Debates around marriage equality are in the news every day, and our lives are the subject of dinner party chatter around the nation. Or perhaps the subject is that our lives shouldn’t be up for debate; either way, our lives are being discussed by those who don’t live them, at unprecedented levels.

This couple clearly made a beeline for us as a visibly queer couple, because in our newsworthiness they (or at least, she) saw a topic of conversation.

I’m exhausted. I’m exhausted from feeling like a target, everywhere I go – whether that’s a target for hate, or pity, or annoying conversation, I still feel like I have a spotlight shining above my head.

I’m exhausted because I don’t even know how much I care about marriage and I worry about the inclusivity of all queers in the campaign and the compromises we might have to face to push this through.

I’m exhausted because I realise this is what other marginalised groups – like refugees, Indigenous Australians, intersex babies, and trans children, who all constantly have to wait for others to decide their fate – face their whole lives, every day, and I should be able to handle a few months.

I’m exhausted, and the vote hasn’t even begun.

Lucy Watson is the online editor of Archer Magazine. She’s also a freelance opinion-giver, a PhD student, a tutor, an avid devotee of pop culture, and a lover of dogs. Follow her on Twitter: @lucyj_watson