Protest, marriage equality and the future of activism 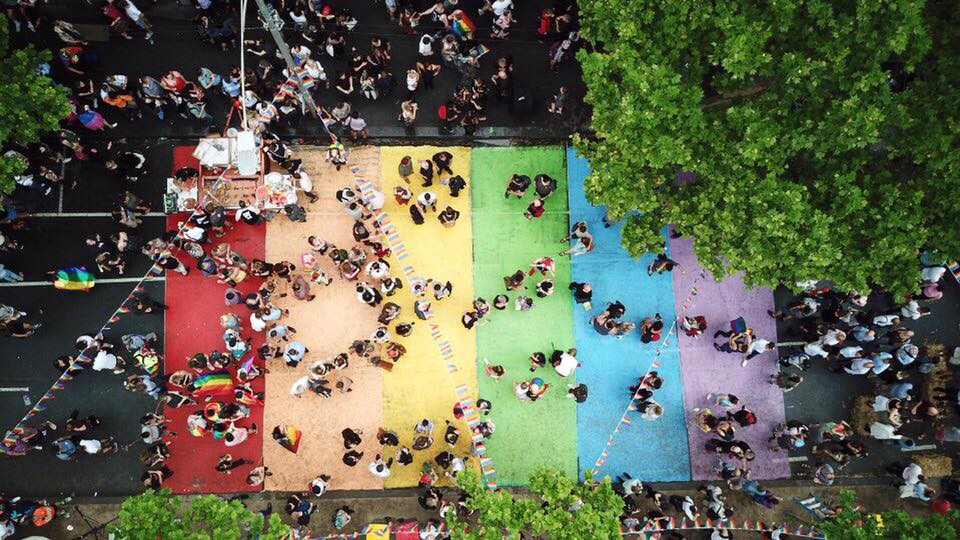 I am on the train, making my way to the marriage equality rally at the State Library. Scrolling through Facebook, I see that Premier Daniel Andrews has posted in support of the march. Foolishly, I begin to read the comments.

‘Let’s hope when they get it they will get out of our faces for good,’ says Trevor. ‘I would like to know what makes people Gay? Surely the Taxpayers’ money would be better spent on researching why?’ says Shirley. ‘Does the thought of two gay men been together make me sick? Yes,’ says Steven.

I close Facebook, saddened. As a friend would say weeks later: ‘I didn’t realise so many people hated us.’ Maybe it’s naïve, but neither did I. Across the aisle, a middle-aged couple are on their way to the footy. I find myself wondering whether they, like Steven from Facebook, are sickened by the thought of me having sex.

On November 15, the results from the postal vote were released in favour of equal marriage rights. Photo: Andy McMaster.

I feel ridiculous for being so affected by a few bigoted, careless social media posts. But, even so, I can’t shut it out. Not today. I feel weak and persecuted. Most of all, though, I feel angry, because these people and this postal survey are forcing me to be something that I’m not.

I arrive at the rally and make my way through the crowd, looking for my friends. A dachshund wears a sign that reads ‘sausages 4 equality’. Kids wearing rainbow capes hang from trees. A gay couple kisses. All of this should stir something in me, but it doesn’t. Instead, I feel embarrassed by my failure to appreciate spectacle, just as I did when I was a child, wandering aimlessly through small, country fetes.

I find my friends up the back. We can’t hear the speakers, so we gossip and plan a weekend away. Sporadic, weak cheers emanate from the stage. The march is about to begin. Apparently, we’re just going to walk around the block and come back here. ‘I want yum cha,’ my friend says.

In this moment, I wonder: Why am I here? Do protests even work? At the Melbourne Writers Festival earlier this year, that very question was posed by Micah White, founder of the Occupy movement. His answer? They do not. Occupy was one of the broadest and most sophisticated social movements of the last fifty years. But, according to White, it was also a failure. No one listened.

At MWF, White said that the lesson of Occupy was that Western governments no longer need to comply with our demands. ‘The people’s sovereignty has been lost,’ he lamented. We must, therefore, take it back. We must aim for revolution.

But, for White, protest in its current form won’t help. Marching in the streets, for example, distracts from the job at hand. ‘Marx and Lenin didn’t sit around talking about raising awareness and networks of care,’ he said. ‘It’s a joke.’

Writer Laurie Penny was on stage with White at MWF, and she disagreed with him. ‘Marx and Lenin never talked about networks of care because they had wives to do the laundry,’ she quipped. For Penny, the goal of all protest does not need to be revolution. Resistance legitimately takes on all manner of forms, from feeding another activist to punching a Nazi.

White wasn’t convinced. When anything other than revolution becomes your primary objective, he responded, ‘you will always lose.’ For him, this is why the Right is winning. Trump didn’t march down the street. ‘He took over the American state. He has the nuclear codes.’

In response to a question from the audience, Penny fondly remembered the protest camps at Occupy where you could always find a hot meal or someone to chat with. ‘These moments allow people to find each other,’ she said. ‘You cannot separate compassion from a revolutionary movement.’

A similar thought crosses my mind when, on the stage below me, a drag queen leads a hearty rendition of Lily Allen’s Fuck You. My friend puts her arm around me. It’s very camp and very fun. A celebrant officiates the mass illegal wedding that concludes the protest. She finishes with: ‘All couples here remain unmarried. You may kiss.’

We have just returned from the march and, somewhere along the way, we found energy and purpose. I saw an ex-lover while walking. I hadn’t seen him since stumbling, bleary-eyed from his house years ago. And, instead of tittering to my friend, I smiled and waved at him. He smiled back. Shirley, Steven, and Trevor from Facebook are far from my mind and I don’t feel weak or exposed or hated. Rather, I feel exultant, because I get to be who I am.

On that day, and throughout the campaign, we didn’t do as White instructs. We didn’t revolt or retake our sovereignty. Instead, we marched. And it felt good. But to what end? In a way, White is right. Despite our efforts, and even with the yes result, the structures that permit and encourage injustice and bigotry remain largely untouched.

I know that wasn’t the point of the march. But is it ever? I don’t agree with White that protest is a ‘joke’. It is important and good. But I do wonder why we should find strength in each other if we’re not going to do anything with it.

Sam Flynn is a lawyer, writer, student and co-founder of www.mykifines.org.au. Last year, he was a member of Liberty Victoria’s Rights Advocacy Project, which teaches strategic advocacy skills to young people.