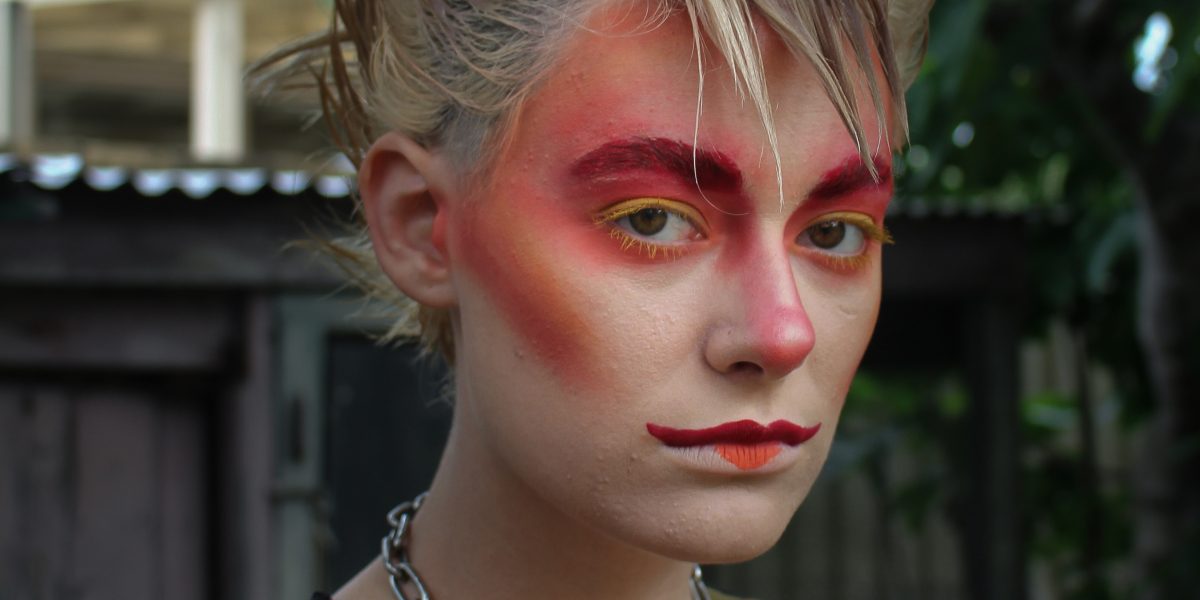 I had used tape to strap down my chest for the first time earlier that day. It was my first live drag performance at Hamer Hall for disrupt, a show for the Yirramboi Festival.

When I was 11 I would use bandages from the first-aid box in our house. My mother would hoard first-aid items and put them into a huge box filled with plastic ziplock bags labelled “nausea”, “headache” and so on.

I would often rummage through the bag with “bandage” written neatly on the front and use the spiked apparatus to pin the bandage together across my chest. As someone who went through puberty pretty early, I had enough young bosom to cause gender dysphoria and confusion.

I got the idea from a book, but while the character in the fantasy novel wanted to be a boy, I just didn’t want to be either. Neither really felt what I wanted it to.

From a young age I’ve always kept secrets that involved only me. On the odd occasion I’ll still do it, as a test of sorts, to see how long I can wait before revealing them. A test of my secret-keeping skills about me, for me.

Wrapping my chest every day for months was one of these secrets. It was only years later that I started to reveal that this was something I used to do, and liked doing.

At age 16, I cut my long hair that went past my hips into a short cropped style. No one really knew why I did it. I’m not really sure that I knew either. I just figured hair was hair and fuck it, short hair looks hot.

I was also tired of being so hyper-sexualised and feminised because of my long hair. I thought that through cutting it, maybe I would have some answers to questions I didn’t know how to ask.

The reactions that many different people had to me cutting my own hair astounded me. People from my primary school who I hadn’t seen in at least four years were messaging me about how I had cut my hair, why had I cut it, it was so nice, why would I do such a thing.

Girls that I’d had falling-outs with messaged me saying they “would have killed for my hair”.

I felt that people who I didn’t know would come up to me and talk to me about cutting my hair.

My mother cried when I showed her: “Not your beautiful long hair, Indiah.” My boyfriend at the time dumped me, and people would snap photos of my face asking why I turned into a lesbian.

This only internalised my queerness further. There was a major sense of repulsion towards the way people treated me for this decision that I had made over my body.

Many of my friends at the time no longer wanted to continue being friends with me due to the way I wanted to look.

It was through this period in my life that I realised the utter lack of autonomy I had over my body. I felt the immense social pressures of colonial beauty standards that had been put in place not only for me, but by me, and maintained by those surrounding me.

Something that came out at this time – or someone, I should say – was Elijah. My mother told me that Elijah was a potential baby name for me if I had been assigned male at birth.

I was smoking a lot of weed at the time, drinking just about every day while skipping school like it was optional. The two girls I was close to at the time and I really liked to play dress-ups and go about our ‘very grown-up day’, which involved day-drinking, rolling around in the sun, hanging out at the skate park and smoking bongs.

After smoking weed instead of eating breakfast, we ventured off for the day. I was dressed like a skater boy with a fake lip ring and pants that were too big, a cap on my head to make jest at my very ‘masculine’ short hair, and a skateboard as a prop. We named me Elijah.

Elijah spent their first conscious day leaning into what they thought masculinity looked and felt like: slightly misogynistic. They would try to hit up girls on the bus, and maybe they would get the ‘joke’, because of course hitting on girls is a ‘joke’.

Elijah was all for a laugh. Just a really funny guy, right? Around this time my friends and I had a bit of a routine: smoke weed, have a few bottles of Trevi (a knock-off Passion Pop) and I would end up as Elijah.

Once, we ended up at one of the local skate parks. I pretended to know how to skate despite hardly being able to stand on the board. There were a few people there (who actually knew how to skate) staring incessantly at me. After a few hours, these boys started questioning who and “what the fuck” I was.

I think back to when I started a Tinder account. Initially, I did this in secret but then posed it as ‘super funny’ to my friends because I was catfishing girls. I knew I was perpetuating toxic masculine traits, but I remember trying to relate to the masculinities that I had been exposed to, which were toxic.

It felt good presenting as masculine, and even though everyone around me thought it was a joke, I still felt some form of affirmation from being able to wear these things around my friends and not being told to “go change”.

The initial shame I felt when I presented Elijah to my group of friends eventually wore off. Despite this, I would always put on my miniskirts, backless halter-necks and winged eyeliner when we went to the local club every weekend using my fake ID.

When I was 18 and dating another boy, I remember trying to help him understand trans and gender non-conforming identities. I explained that people who are assigned male at birth can be women/femme and that colonial prescriptions of genitalia don’t define gender.

We were walking around late at night smoking cigarettes and drinking. I remember his warm, comforting hands holding mine.

“So, like you? Because you’re both masculine and feminine?” he asked me.

I responded by smiling. I was elated that I was what he thought of.

Having someone who was so close to me validate me in a way that he didn’t (and, I suppose, I didn’t) understand was really integral in navigating my own identity. I liked that he didn’t see me as a cis woman at that moment, that without question, he saw who I felt I really was: someone I wasn’t sure how to articulate. He saw me in a way which was similar to the way I saw me.

Responding to his question, I went into more detail: “No, not like me. I don’t feel like a man, or present masc,” which was true.

When I was 19, a few people I knew were coming out as gender non-conforming. I asked a friend of mine who is queer if they had thought much about their pronouns.

I started to explain that I was thinking about starting to go by they/them, to which they responded that they didn’t think that was the point of the pronouns, not for ‘people like me’ – referring to my cis passing.

This was the first time I had tried to express my deep feelings about gender. I thought my friend would understand that I’m not trying to take up space, but just exist, and I was upset that they were able to shut down the conversation of identity so quickly.

This particular incident made me reflect on the perception of non-binary peoples, and performativity in relation to gender.

Gender non-conforming people don’t owe cisgender people anything. I don’t owe you to fit the typical white-passing skinny androgynous look that you assign to non-binary. I don’t need to prove my non-binary body or gender to you by going against femininity.

So back to just having done my first drag performance. After two years of quietly, then loudly, identifying as queer, I had performed at Hamer Hall as Mo Money, as part of disrupt. Chest strapped down with tape, only wearing oversized suit pants, carrying around a blazer that was way too big for me, I felt good. I felt really good.

I was acting a bit like a parrot with a mirror – every time I would see my reflection I would jump up and down a bit and squawk to express how impressed I was with the way I looked.

After the show I consumed many a cocktail, danced at a queer Blak art exhibition opening at Federation Square for hours, and eventually ended up going home with a friend that I had been wanting to peg for ages. I was stoked, this was one of the best days in ages.

We went back to theirs and I had a shower. I took off my suit, which didn’t really feel like a costume anymore. Turning on the water, I looked down at my body where I had make-up and tape on me. Slowly, I peeled off the tape and soaped off the make-up and sweat. I saw my body differently than I had a week ago. It looked new all of a sudden, but also painfully familiar.

Feeling clean with lingering body dysphoria and euphoria, I got into some of their pyjamas and cuddled up next to them. We were both too drunk to even consider kissing. Plus we were missing a strap-on if I was going to peg them like I was really hoping for.

I kept revisiting all of the energy from the day. But my thoughts kept leading me back to when I was 11 and when I was 16.

I thought about the times that I would rock up to a party with a 10-pack of beer and someone would say it wasn’t very ‘girly’ of me.

Or when I would find it hard to relate to a lot of the people in high school for a variety of reasons, but particularly the girls around my age having interests in things I found difficult to understand.

I thought back on all the times people told me I was acting ‘like a boy’, or different from the girls they knew, or people would say I was handsome ‘for a girl’. I remembered when people would make jokes that I ‘wore the pants’ in every relationship I had been in.

Suddenly it all clicked. I was genderqueer. This isn’t to take autonomy or power away from people who feel or experience these things and identify as women, but I realised I didn’t feel that way anymore. I didn’t feel the ‘womanness’ that many of my friends did.

I no longer subscribe to the colonial gender that I was assigned. I’m non-binary, and had been existing in two modes of hypermasculinity or hyperfemininity, not realising I didn’t have to perform for anyone, not even myself.

I expressed this to my friend, who I was sleepily laying in bed next to. They hugged me and said how happy they were for me.

After that we started kissing.

They have had their work published in Rabbit Journal and been privileged enough to give a reading at The Wheeler Centre for Alison Whittaker’s book, Blakwork. They have hosted multiple events and Q&A sessions on a national scale. They have had multiple visual and written pieces published in Under Bunjil, an entirely Indigenous-run magazine, while also being a creative editor in 2018.

Elijah is also a visual artist who has had their work in the Koorie Heritage Trust in their annual show for three years running and been part of exhibitions hanging alongside international artists. Recently, Eiljah made their debut as a drag king at Hamer Hall as part of Yirramboi’s show, disrupt.