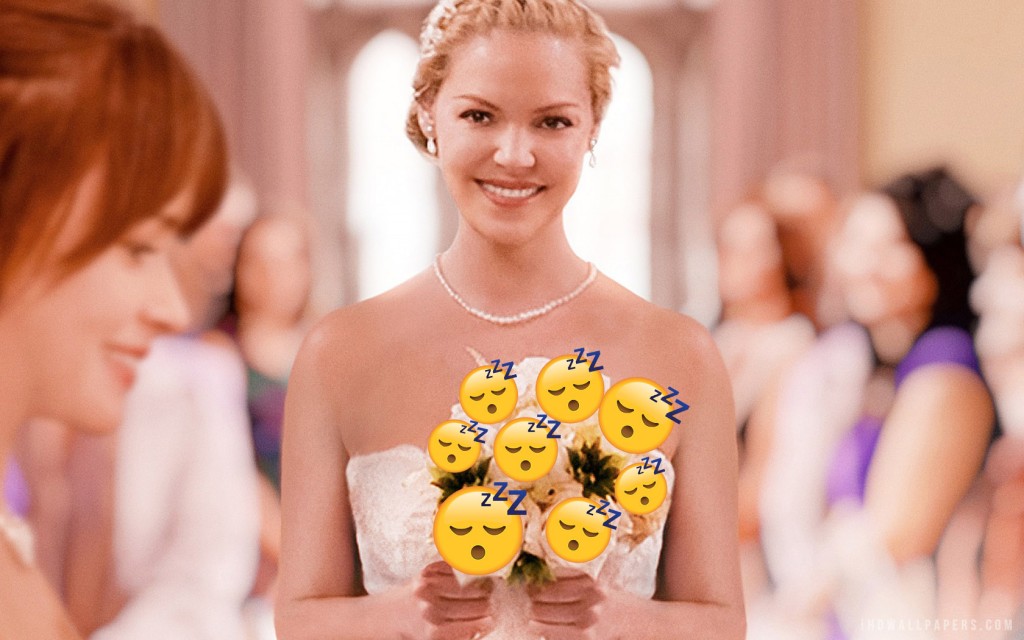 A fun element of being both queer and a lover of cinema is that you are so desperate to see a likeness of yourself and your community that you will watch literally any movie that has any hint of LGBT representation.

You may have found a wonderful little selection of films online that focus on queer characters. I adored Boy Meets Girl (available on Netflix), a lovely film about a trans girl falling in love in suburbia. Weekend (Stan) tells the story of two men meeting at a bar, and perfectly illustrates modern dating.

Sadly, for every gem there are five or six duds.

Jenny’s Wedding is in the latter category. I watched it naively the first time because I read the synopsis (essentially: lesbian wedding) and thought ‘hooray!’. I then suffered through it a second time because I felt a review would be funny article to write, and then screamed at myself for pitching the idea.

I’ve never written a film review before, so naturally I did some hard-hitting research (read: Googled ‘how to write film review help please help’). Many sources say to start with an interesting fact about the film. Here’s one about Jenny’s Wedding: it sucks. It really, really, sucks.

There will be spoilers ahead, but please know that this is a good thing – readers, you should be thanking me. I am saving you from ever having to see this horrible film.

The movie’s opening credits begin typically of most rom-coms, with a playful song alongside a montage of couples on their wedding day. It feels like we are supposed to notice all couples are heterosexual, but I also can’t help but notice they are also overwhelmingly white.

Jenny is played by Katherine Heigl in a performance that I really want to feel she tried very hard on, but is ultimately let down by terrible dialogue and a clunky story. The film opens with Jenny at her nephew’s christening. She hesitates and looks alarmed when the priest asks if she will renounce satan. We all know this is because she is hiding a terrible secret! She is a sinner! A big gay sinner!

Essentially, the film not-so-subtly sets the scene that Jenny’s family are incredibly traditional and conservative, and are always pushing her to just get married already – but to a man, of course. Tradition, remember?

It is revealed in a scene at Jenny’s apartment that she actually is dating someone: RORY GILMORE! Sorry – I mean Kitty, played by the incredibly sweet and incredibly boring Alexis Bledel.

Given the title of the film is Jenny’s Wedding, it’s not surprising that these two gal pals decide to get hitched. What is surprising, is that they speak formally and clinically about the decision, as though agreeing to buy a new kettle. They sit opposite each other like awkward colleagues in the work kitchen, sipping their cups of tea.

They barely touch each other for the entirety of the film and any scenes where they do kiss are suddenly seen from a distance shot, as though too shocking to see up close.

This entire film is so bland, and little is written in to make us care about any of the characters, especially Jenny. Kitty drives Jenny to her parents’ house to “drop the bomb” (come out) and she doesn’t go in with her, just drops her off and drives away.

It’s worth noting that the women have a very cute dog who is not formally introduced at all and I feel this is both a sickening oversight and personal slight towards me.

Jenny looks scared but as viewers we have absolutely no feelings for her because we don’t know her – who is Jenny? Why hasn’t she come out until now? Why is she so awkward around her fiancee? What is the dog’s name?!

So, the bomb is dropped, to her parents only. Her mother cries. Jenny cries. There is no nuance to these coming-out scenes – Jenny’s mother literally wears pearls and clutches them. Her father paces the floor of his shed muttering about convention or tradition or something, I don’t know – I got bored and made a toasted sandwich.

Jenny also has a mean but hot sister, Anne. She’s about to get the shock of her life! She spots Jenny at a department store, where Jenny and Kitty are looking at wedding dresses. Side-note: are these two named after someone’s cats? Maybe. We’ll never know.

Anne spots the lovebirds canoodling and the penny drops. Again, the camera zooms out when the actual canoodling (read: very awkward close-mouthed kiss) occurs. The kisses they share look so stiff and uncomfortable and suddenly I’m having flashbacks to the first time I kissed a boy and accidentally burped in his mouth.

So, everyone knows now, Jenny’s queer. Probably her only non-boring feature. But do we care? Honestly, no. The only way they could have made this film more boring is if they removed all characters and had just one 90-minute scene of Katherine Heigl gardening, and called it Jenny’s Weeding.

The film has potential to examine difficult themes, particularly around religion, but it doesn’t. It very briefly dances around anything difficult before moving on to another scene, usually a montage of people looking pensive.

Oh yes, the montages – there are so many. A song plays over the top of fraught-looking family members and lyrics tell us “I can’t change, even if I tried… even if I wanted to…” SO SUBTLE.

Between about 25 minutes of montages, there is a short scene in a wedding shop with the gals. Kitty emerges from the change room wearing an ill-fitting, cheap-looking frock, and Jenny says “wow” in the same faux-excited tone when your colleague tells you a story about their weekend.

There is ZERO chemistry between these women, and I’m not sure if the actors actually were uncomfortable or if the dull script just didn’t inspire them. Maybe one of them had a urinary tract infection during filming? Who knows.

More montages and that song continuously plays. It’s almost as though they are trying to tell us that Jenny can’t change, even if she tried….

Suddenly the wedding day is here, hooray! The day that literally nobody cares about but that we all knew was going to happen anyway because the official image for the film is the two women on their wedding day!

Jenny’s dad isn’t sure if he will be there because he’s still homophobic or something. But then, here he is, and naturally all the attention is on him and his feelings.

We are supposed to be really proud of him I think but it’s more frustrating that the day is now all about some old conservative white guy instead of two gals becoming officially pals.

Boring Jenny is walked down the aisle by her boring father and boring Kitty is waiting at the altar, looking as believably ‘happy’ as when she played Rory Gilmore drinking all those empty cups of coffee in Luke’s diner. Sorry, that feels mean – it’s just watching Bledel act feels like a very innocent baby deer accidentally wandered on set and everyone is too polite to shoo it away.

They are now wed under the eyes of God, who seems to play a significant underlying role in this movie but is not talked about as they skirt around any real issues with montages. 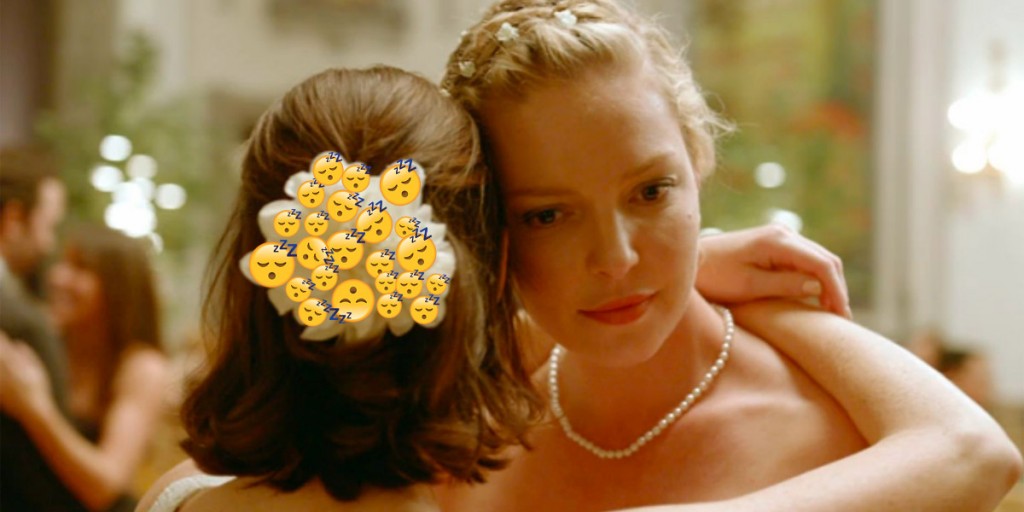 Some films are so bad that they are enjoyable. Jenny’s Wedding, however, isn’t so awful it’s funny – it’s just boring. It’s wildly mediocre and white and bland, like a stale Salada biscuit.

Perhaps we should be happy that mediocre films about queer women exist – not every film featuring an LGBT character has to involve death – but I just wish this one was better.

The film ends with white people doing the conga line and my notes tell me that “I have never wished death upon such a large number of people in my life”. I’m still unsure as to why I thought watching this movie twice would be a good idea, probably because I hate myself.

It’s tradition in some circles to end reviews with a star review or number scoring. I give Jenny’s Wedding one salada biscuit out of ten, and that’s only because there is a dog.

Sidenote: if you want to watch an actually decent rom-com that involves no death or dying but actually good acting – seek out Imagine Me and You. I am going to go watch that now as an antidote.