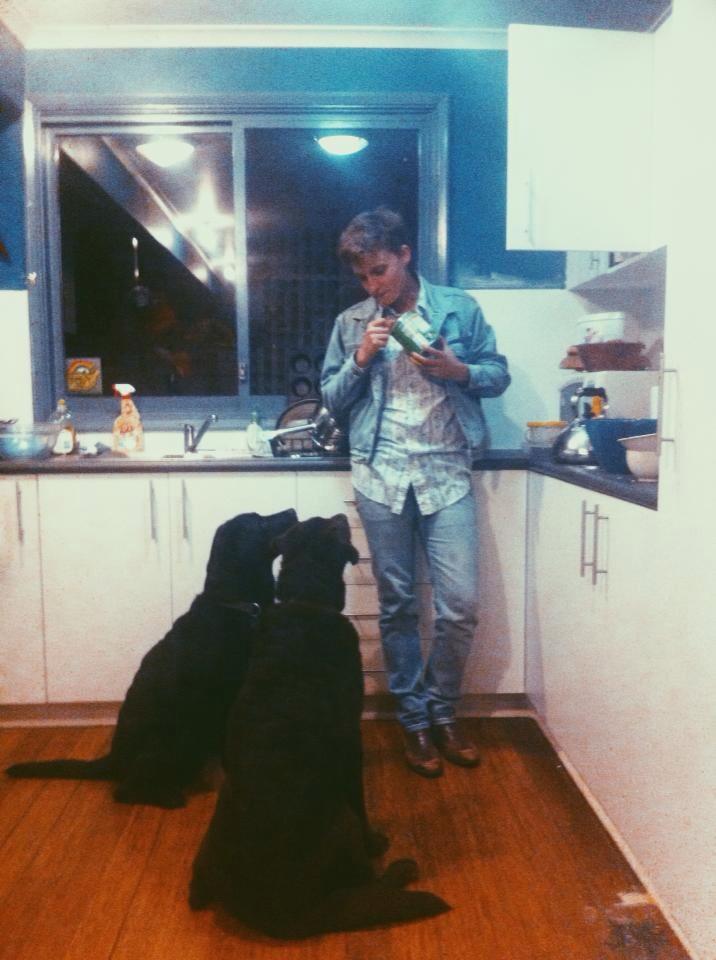 I was born a blank canvas, a little grub writhing around on a bed of expectations. I grew up in a world attempting to socialise me to be a woman – to match the junk I had between my legs and that later grew upon my chest.

Instead I grew up completely confused by what I was and wanted to be – I still am a lot of the time.

By the time I hit 17 or 18, I started binding to alleviate the severe dysphoria I’ve had about my chest since puberty. Life continued as normal for me. I identified as a genderqueerwoman because at the time I didn’t know it was possible to be anything other than a transman or a transwoman; non-binary trans folk don’t exist in the public sphere.

I eventually came to terms with the fact that I’m transgenderqueer. No, I’m not genderfucking, I’m not ‘just’ androgynous or ‘just’ boyish or anything. I am a fully fledged trans person who just doesn’t fit the mould we’ve all grown so used to. I’m not here or there, I’m something in between and on the outer, and it’s always been that way. In some ways, it’s also a big choice I make to fuck with everybody’s perception of gender and sexuality as something that can be categorised – don’t fence me in.

Time went by, and binding has proved a real struggle in the long-term. I’m thin, but not skinny, so my binder cuts into my flesh (I can’t imagine the pain bigger folk feel). I’ve got a biggish chest so binding restricts my breathing severely, and still doesn’t produce the male-contoured chest I actually require. Binding bruises my ribs, making me panic that I’m having a heart attack when I get chest pain (which is frequent). I’ve got callouses where my binder cuts into me, and sometimes they split and bleed. I can’t leave the house without one on though, and so when the callouses split, or I’ve got the flu, or haven’t done laundry, life gets in the way of life.

I’ve suffered so much just to kind-of feel sort-of-okay in my body, and even still, it’s not right.

So when I finally figured out how to access top surgery (there really aren’t any resources for people who don’t want hormones but need top*), I blathered on about it to everybody who listened. I told people I was getting it, and why, and when, and that I was getting double-incision because I’m too big for peri-areolar, and so on.

Eventually, my financial troubles meant that a friend of mine set up a crowdfunder for me to help me get the last little bit of money. Life was good. Life is good!

But something that kept niggling at me, annoying me ever so slightly, is the volume of people who told me I was brave for getting surgery. Presumably because surgery is dangerous, but also I guess people think I’m brave simply for being upfront and proud about my gender journey.

I know all those words of encouragement were coming from a very good place, and I love every single person who’s given me that encouragement. If you’ve told me I’m brave please don’t take offence, I know where your heart is, it’s right here next to mine, and everything is as dandy as I am.

But this word, brave, is thrown around a lot, particularly to transfolk like myself. Bravery for going against the grain. Bravery for telling society upfront that this is who I am, this is who we are, and we’re not ashamed of ourselves. Bravery for walking the streets, for choosing to live.

Really? Think about that.

I’m brave because I’m finally having the surgery I should have had years ago? To fix something about my body using a medical procedure? To me, it’s as straightforward as getting your appendix out.

Brave because I want to be the advocate I longed for when I was growing up?

Brave because I speak out when transphobia rears its ugly head, when even the queerest events advertise to ‘boys and girls’?

Brave because I’m choosing surgery and a 6-week recovery period over a lifetime of binding my chest, a lifetime of discomfort and cracked skin and not being able to run up a hill because my lungs are getting the air squeezed out of them?

This isn’t bravery. I’m simply choosing to live the life that most cisfolk get to live every day, without question. I’m choosing to talk about my body unashamedly, like cisfolk get to do, because their bodies aren’t taboo like ours are (discussions about size, ability and race would be added here if I had space, because of course these bodies aren’t normalised or accepted by society either).

This is the cutting edge of cissexism, where the bodies of cisfolk are typically so normalised they become natural, and talked about with ease, so that when transfolk try and do the exact same thing we get put on a pedestal and thanked for our bravery.

My body is normalised in my mind, it’s natural to me, and so I walk this earth proving to all those around me that it’s something worthy of acceptance. If you think that’s brave, you should see what the rest of my life is like.

* You literally just ask your GP, they refer you to a psychologist specialising in gender (if they don’t know one, make them find out), you explain your complicated gender story, and they recommend you for surgery, then your GP refers you to the surgeon of your choice.

Laurie Hopkins is a nursing student who is getting top surgery this month. In their free time they enjoy playing Mario Party, cooking popcorn, and listening to bluegrass music.