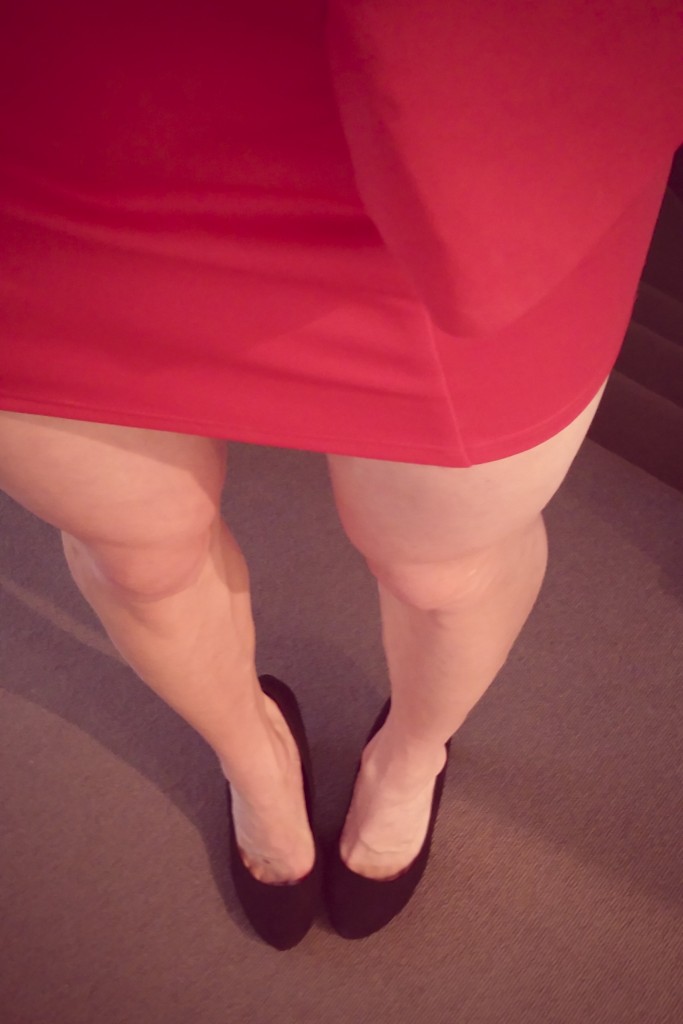 It had taken my boss three weeks to comment on my new look. I was glad she liked my shoes, because although I’d only owned office-appropriate heels for a few weeks, I’d dreamed of wearing them for more than 20 years.

This is me now. Rewind a couple of years, and this personal unveiling would have seemed like a dream and a nightmare rolled into one: the dream of unveiling a part of me that had been under wraps for so long, and the nightmare of facing ridicule, or not being accepted.

When I finally bit the bullet and took those first terrified steps, some of my colleagues had known me as a confident, outgoing man for more than 10 years. Over a period of weeks my presentation changed subtly – my men’s shirt became a women’s tailored one. My shoes grew a block heel.

That Monday, I wore women’s pants, jewellery and subtle make-up. By Friday, it was red lipstick and pumps. Few people dared to ask me about my sudden change in appearance. Were they being respectful? Were they protecting their jobs in a politically-correct government office environment? Or, did my effeminate look throw them so far out of their comfort zone that they lacked the vocabulary to start a conversation? Whatever the case, I found that most people, friends and strangers alike, did most of their talking with sideways glances, and, occasionally, unflinching stares.

With my new look, I found I had also inadvertently become a label magnet. It made sense: I had been trying to apply them to myself since I was 12. Cross dresser? Transgender? Gender-fluid? And although I knew that the clothes didn’t maketh the man, or the woman, for that matter, I also knew that, labels aside, the mundanity of 9- to-5 had been replaced by something far more interesting.

My childhood was a happy one, but as puberty hit, I had started to look at girls with a sense of awe and jealously. I liked girls, but I also wanted to be like them.

Those are confusing thoughts for a 13-year-old in this heteronormative world. I labelled the thoughts as a phase, and grew into a teenager who appeared well- adjusted to all who knew me. I was the judo and athletics champion, school captain, and a first-class honours graduate with a big secret.

As a teenager, I collected my first secret stash of women’s clothes from op shops. I was too scared to try anything on in the store and was terrified that somebody I knew might see me. When I was home alone I would retrieve the hidden stash, hoping that nobody would return home and find me. As I got older the stash became more elaborate and harder to hide, but remained my only source of feminine expression.

Around the same time my younger sister started experimenting with make-up, and I became her mannequin. I was thrilled. I badgered her to practice her skills again and again, under the pretence that I was helping her. That was the closest I got to telling anyone in my family.

Over the years, the stashes had been purged, with the repeated mantra of “never again”, only to be inevitably replaced by a new hidden wardrobe. My secret remained until my mid-20s, when my girlfriend of four years, who I’d crossed the globe for, found my secret stash. Almost instantly, my girlfriend became more interested in another man and, for me, it was hard to overlook the coincidence. It confirmed what I’d suspected all along: in society’s eyes, stepping over the gender line was not acceptable.

It’s difficult to face up to hard facts. For years, I tried to wish away this part of me that wasn’t like other boys, because to me, it represented a difficult life. It was an obstacle that had destroyed a long-term relationship, dominated my thoughts, and sapped my productivity. I decided my next relationship would be different, that I’d be a ‘regular guy’, and I managed successfully for a few years. Predictably, though, my gender variance reared its head again, and, five years later, my fiancé decided we’d be better apart.

You cannot run away from yourself. When I found myself in my mid-30s after another failed relationship, I was exhausted. Hiding an intrinsic part of myself for fear of rejection was unsustainable, I realised, and unfair on myself and my loved ones. Having paid the price of dishonesty with my partners, my family and myself, I felt like I had no choice. I had to be honest. 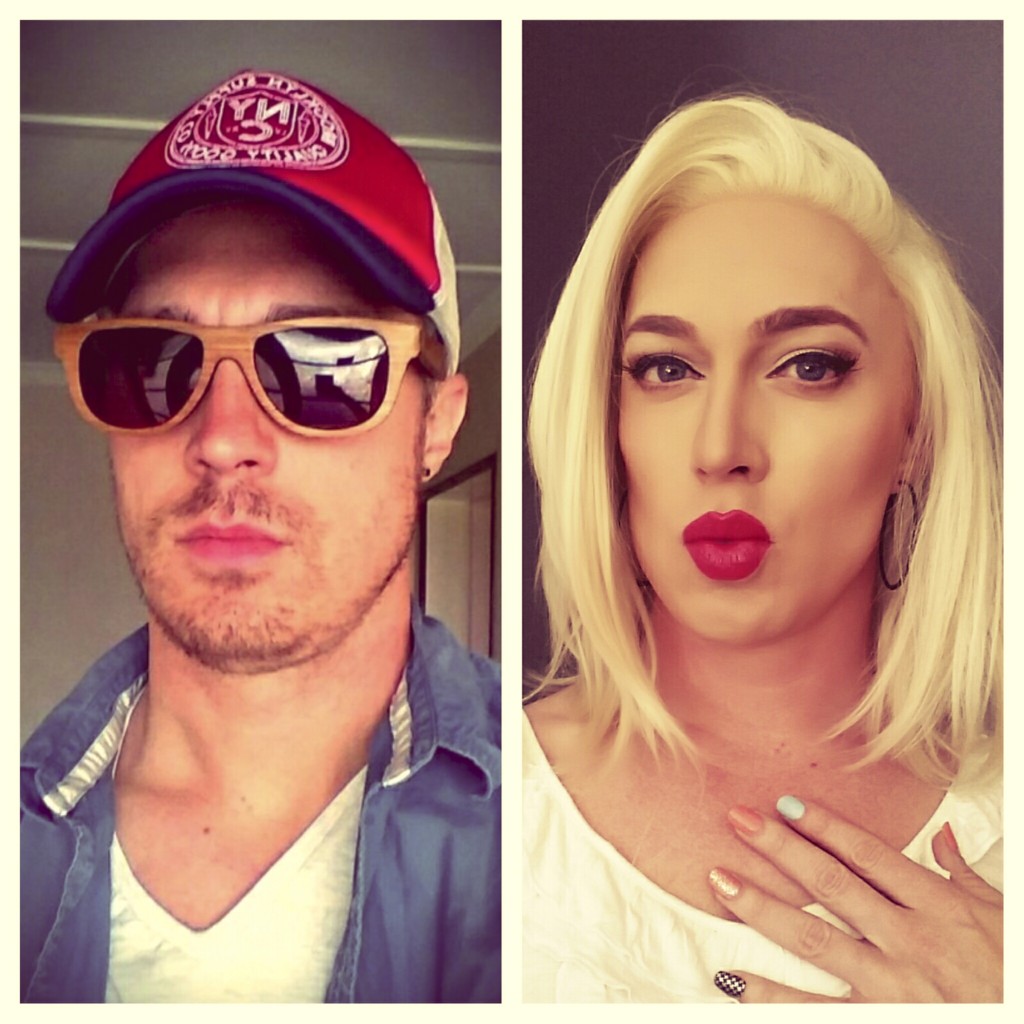 I started to test the water with small steps. My moisturiser was replaced with a light foundation. My short nails became manicured. I got my ears pierced and had my eyebrows shaped.

At the time, these were huge personal milestones, but things I could explain away if challenged. “I must’ve picked up the wrong moisturiser,” or “I just haven’t got around to cutting my nails,” would likely pass. I was skirting around the edge of the pool, dipping in a toe.

Although I had been on tenterhooks expecting a negative reaction, it didn’t come. There were raised eyebrows but, for most part, people didn’t comment or care. For years, I thought I was the centre of everybody else’s universe, but I wasn’t. My visible changes were clearly much more significant to me than they were to anybody else and this gave me enormous confidence.

I recall playing pool in a bar one night looking decidedly feminine, when a drunken tradie headed my way. “Mate,” he slurred, “You look like a chick but talk like a dude. What’s the go?” If only my work colleagues had been so honest a year earlier. After setting out my stall, he smiled and said, “Well, fuck, you can play pool!”

For me, personal authenticity is essential to my well-being and surpasses the need to ‘pass’ (a term used for a trans person who is perceived as their presented gender). This is a contentious issue in the trans community, because it is intrinsically linked to acceptance by others. Of course, I’d love to be prettier, to have more hair and a better figure, but this is the human condition, not exclusively a trans issue.

I don’t try to modulate my voice because I feel it wouldn’t be my voice. Similarly, I don’t use a female name. When I dress in a way that is perceived as female, while not proclaiming to be female, I am being me, in the most honest way I can. I am not pretending to be something I’m not, and living with authenticity brings confidence and peace that I lacked for a long time.

Sometimes I find it hard to choose between tea and coffee, so choosing between genders seems overwhelming. Authenticity is about expressing yourself without inhibition, not about choosing which basket to put your eggs into. So why choose? Whose rules am I following, anyway? This realisation removed a lot of selfimposed conformance pressure, and suddenly I felt comfortable being me, whether I was wearing a dress or a beard. It was then I stopped seeing the stares, and instead noticed the supportive smiles.

If a non-binary presentation sounds like a breeze, make no mistake, it brings significant challenges. One of the big ones is sexism in the workplace. Suddenly being treated like a woman starkly highlights the gender divide, whether I’m being spoken over in a meeting, or receiving a belittling “I’ve got a nice job you can do for me!” from a same-level male colleague. Of course, I knew sexism existed, but male privilege had exempted me from it.

Openly straddling genders has also broken down social barriers that had previously existed for me. Before, if I’d started chatting to a woman, society had taught her that I was ‘hitting on her’ and to disengage or be defensive. Now, we are able to chat more openly without the same social restraints. Although I am the same person, my presentation has changed the rules. I now have some amazing girlfriends that I might’ve only had superficial relationships with before. I feel like I have discovered a special club that men aren’t told about.

Men, on the other hand, are more regularly pushed out of their comfort zones. Machismo, especially the Australian kind, embraces ‘blokiness’and actively denigrates feminine characteristics. I’ve become used to seeing the disgusted curl of a male lip or, in the case of executives in my workplace, a sudden interest in the carpet when passing each other in the corridor.

And although there are exceptions to the rule, I find that women have a broader and more flexible social vocabulary. I just feel lucky to have a lot of male friends, who, despite being the epitome of Australian maleness, couldn’t care less what I was wearing.

So what am I? A guy in dress? Trans? Have I simply scratched a 25-year itch? I felt like this would answer itself and in some ways it has. The importance of expressing yourself freely cannot be underestimated, as many don’t have the privilege. Some days I’m a girl. Other days I’m a guy. Some days I’m bits of both, or neither.

A girlfriend asked me what my preferred pronouns are. For me, pronouns are just more labels. I’m not offended by ‘he’ – after all, the world has known me as ‘he’ for a long time. I’m also fine with ‘she’, but it feels like being called by somebody else’s name – it feels like a novelty. I’m just me.

When my current girlfriend became my girlfriend, I was open with her, although quite coy. Unsure of how to broach the subject, I texted her a picture of my legs poking out of a red dress. Her reply of “Nice legs!” said it all. For the first time in my life, the whole of me felt loved and accepted, and I was free to love her back with absolute honesty, and without inhibition.

I used to be ashamed of this facet of myself, but now I’m proud of it. It doesn’t detract from me, it provides a clearer picture. Friends and family who might feel confused by my changes are, in fact, now seeing the full version of me. The facade has gone and, with it, a burden I’ve carried for so long.

Some people commend me for my bravery but I don’t feel brave. I simply feel that I am doing what I must do, what I should’ve done when I was younger but lacked the balls because I wanted to be accepted. I used to think that the most important thing was to be accepted by others. I now know that it’s to accept myself.