Wog Boys: The patron saints of bisexuality who inspired my drag 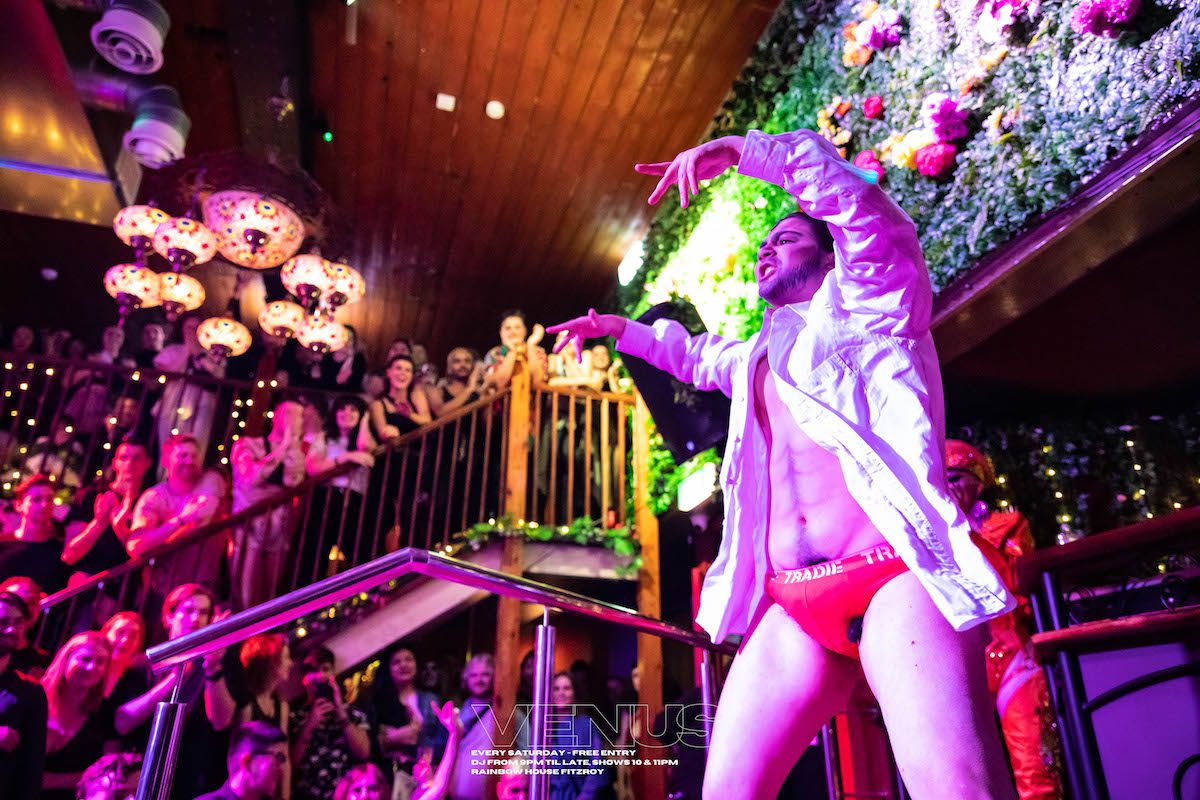 Our lunches sit in our up-turned summer hats like pretentious fruit bowls. Our uniform hems grazes our knees, as we sit with perfectly crossed legs.

My friend Victoria, who I’d known basically my whole life, slams down her tuck shop focaccia. She pauses for effect – at 12 years old, she was already dramatic.

“Raise your hand if you are going to be in the Wog group in year eight!” she shouted.

A few of my friends – whose names all end in a vowel – shove their hands in the air. There’s silence. I look up, see everyone’s eyes on me, and slowly raise my hand. My face scrunches into a question mark.

The next few years are a teenage blur soundtracked by some Tiesto remixed R’n’B song.

Texting a boy, “hey, I’ve got my eyebrows waxed, and Isabella says I look hot now, promise.” Applying foundation over my lips.

Teasing my hair in between classes.

Screaming at my parents until they let me go to the Carnivale Festival wearing a Ferrari T-shirt and Catholic jewellery accessories.

In hindsight, all of this was a desperate attempt to just fit in. To suppress the bubbling feeling of being different.

To strike that balance between revolting against, and impressing, my parents.

As the first child, and the queer closeted Virgo that I was, that never came naturally.

Like my yellow-toned Mac foundation, I was laying it on thick.

The bella ‘Wog Girl Barbies’ I surrounded myself with were my ride or die friends. The sheer force of these girls still impresses me.

One once backed me up by screaming, “She’s bleeding from the flaps, sir!” because the teacher wouldn’t let me go to the school nurse to get a heat pack. Honesty – not to be messed with.

I was a knock-off, and they were the Mattel.

I soon learned that no Wog Girl Barbie is without her Wog Boy Ken.

Wog Boy Ken has a nickname based on his last name, such as Rez or Luggs. He drives his Nonno’s car, wears jewellery, and has a short-back-and-sides haircut with a strip of a 2000s mullet at the top of his neck. Hubba hubba. I was surrounded by Wog Boy Kens growing up.

Their constant negging, their overconfidence and the explosive way they entered a room caused blood to pulse in all the areas.

But the older I got, the less the blood pulsed, the more it boiled.

This tends to create young men who have a lack of empathy and awareness, an inflated sense of selves and, at times, who can be straight up grotesque.

I had perfected my ‘bella on the arm’ look, but within two minutes of meeting me, they’d see right through it.

They’d experience my feminist clapbacks, my underarm hair and my inability to ‘take a joke’.

Despite this rivalry, I was –and still am – surrounded by them. I’m constantly trying to balance my care and my frustration toward them.

It wasn’t until the pointier end of my twenties – over ten years after the lunch time identity stand-off – that my queerness discovered me.

My queerness felt like a long-lost sibling. One that turned up on my door one day and inserted herself into my life.

Some days I love her. Other days I’m mad that all of her excess mullet styling has ruined my hair.

Overall though, she saved me. My queerness was the slap in the face that I needed.

It forced me to realise that I wasn’t happy where I was: a heartbeat away from the Wog Barbie & Ken family extension pack.

Despite being queer theoretically, I had no idea how to be queer practically. It felt like starting at a new school. Everyone already knew each other, had slept with each other, and had a dress code. Carabiners included.

When I began awkwardly flirting with girls, I kept hearing the voices of these boys staining my words.

If I wanted to be suave and tell someone they looked beautiful, to my ears it sounded like “Oi, bella, you look alright, ay?”

My internalized homophobia and my experience with ‘compulsory heterosexuality’ meant that any romantic or sexual advances to someone of the same sex were followed by a wash of shame. It felt like I was treating them the same way those boys treated me and my friends.

However, I soon realised something unexpected: my gateway into my queer community, my patron saint of bisexual empowerment, was the Wog Boy. I was seeing things in a new light.

In my eyes, Wog Boys are the ultimate queer icons. They are not afraid of accessories. They make sure to kiss everyone hello, no matter what gender. They’re also stubbornly themselves.

That’s where Bruno Salsicce comes in – my drag persona. And if the vowels, and sausage innuendo didn’t give it away, he is a Wog Boiiiiiiiii.

A Lynx radiating, Adidas reppin’ mother’s boy. He’s a cocky sleaze that – despite all your attempts – you can’t help but find attractive.

He is unapologetically himself. Bruno is completely empowered by his sensuality. He’s confident flirting with all the bellas, bellos and bellinis.

Bruno helped me find my place at my new queer famiglia’s table. He is teaching me how to own my sexuality – in a mask of chest hair. 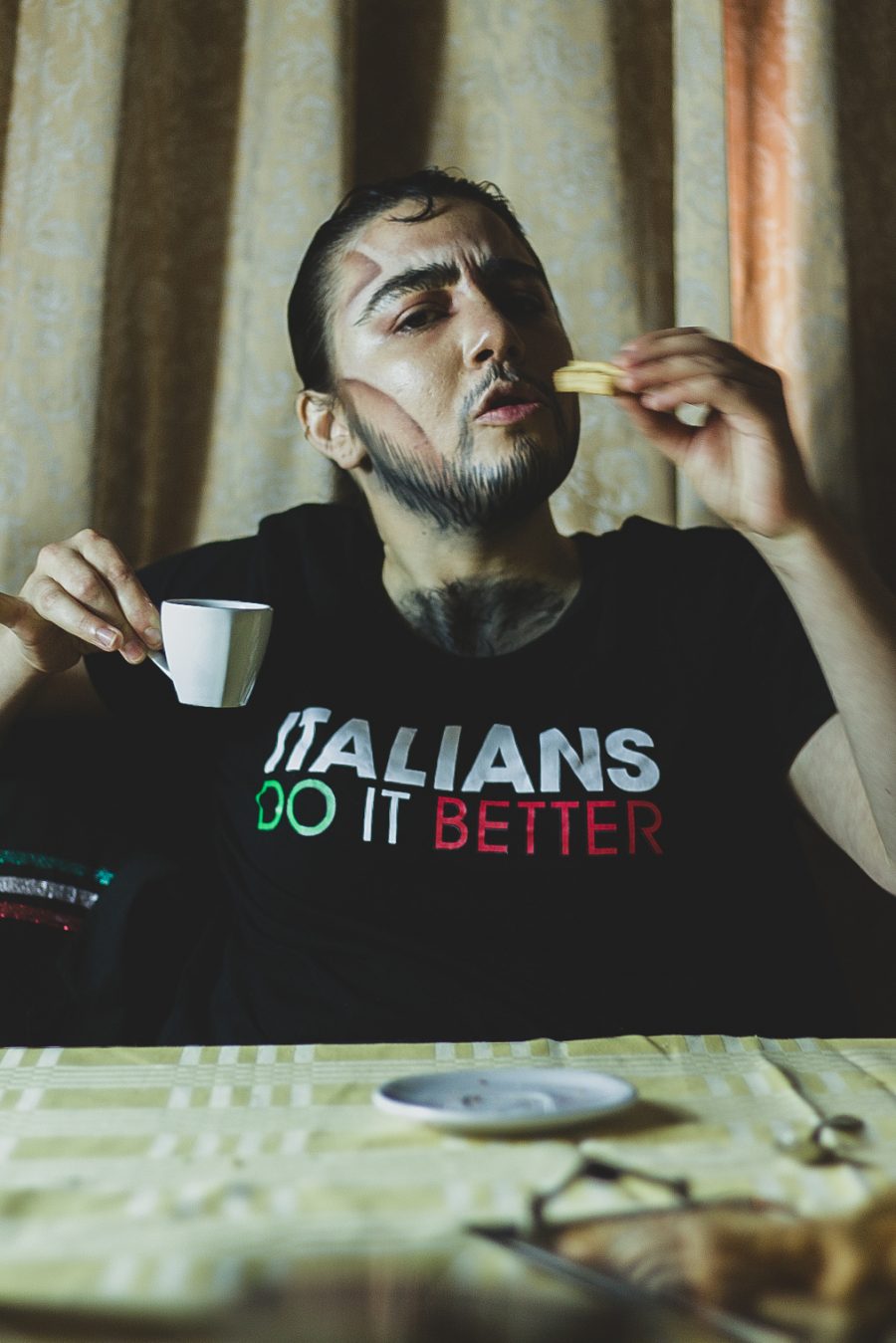 The author in drag as Bruno Salsicce, taken by Pamela Boutros.

I strongly believe everyone should do drag at least once. A three-minute number can teach you more about yourself than any trip to Mykonos can.

One of Bruno’s numbers involves a mash-up of some of Australia’s iconic Wog Boys. It shows a metamorphosis from good church boy Anthony Callea to brash Steve (Nicholas Giannopoulos) from the cringe but campy film Wog Boy.

The number culminates in a worlds-colliding techno remix of the Tarantella.

Perhaps I am asking too much of a piece often performed in front of young drunk queers on a sticky dancefloor.

But to me, this number tells a story about owning the judgement and labels others put on us. It’s about finding – and celebrating – ourselves.

Over time, my confidence grew.

I could take up space, hip thrust in my undies stuffed with three pairs of hiking socks (humble brag), and the ghosts of Wog Boys past couldn’t stop me.

I was out-Wog Boying them!

If it wasn’t for my queerness, I wouldn’t have had the perspective to actively choose who I want to be. Or to choose to cultivate a life outside of the ‘wog-group-or-not’ binary.

If it wasn’t for Bruno, and the concoction of Wog Boys he’s inspired by, I wouldn’t be standing as strongly in my (relatively) new queer shoes.

I maybe didn’t fit the part of the Wog Girl very well, but hey, I make one hot queer Wog Boy.

Chiara (@chiara.witha.ch) is a queer artist living and working on Wurundjeri land. She has her fingers in many pies working as an writer, performer and theatre-maker. Her mum is most proud of her work performing in the Ruby Award-winning SASTC’s production ‘Gorgon’, and the collection of her poetry that was published in the anthology titled, ‘Spitting Teeth’. Chiara has loved working with the wonderful humans at ActNow Theatre, FreeRange Theatrix, Foul Play, and Windmill Theatre. There is also a boy, Bruno Salsicce (@bruno_salsicce), who looks like Chiara in drag but is just another wog boy trying hard to be woke.