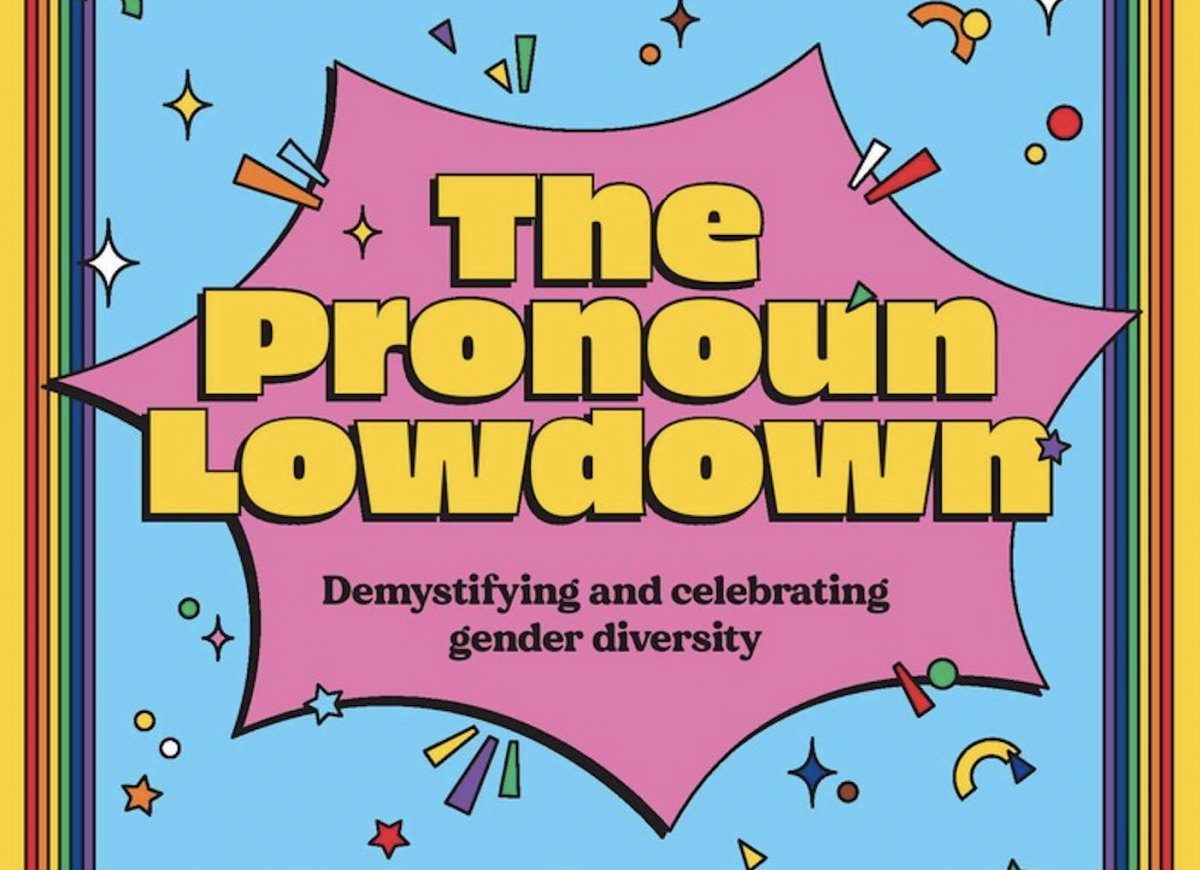 Nevo Zisin is a Jewish, Queer, non-binary activist, public speaker and writer. They run gender inclusivity workshops in schools, workplaces, and in their local Jewish community. Nevo previously authored Finding Nevo, a poignant memoir on the experience of gender transitioning.

In the opening pages of The Pronoun Lowdown, you say: “I realised that I was transgender. People think these realisations are a lightbulb moment, but, for me, that bulb just illuminated a room full of monsters.” What was coming to terms with this realisation, at a time when there was even less representation of gender diversity than there is now, like for you?

I came out as transgender in 2013. It wasn’t that long ago in the scheme of things, but there truly is a world of difference now as far as transgender representation goes. I didn’t grow up seeing myself in the media at all. Except for maybe in the film Boys Don’t Cry, which was pretty traumatic to watch as a gender-questioning 16-year-old.

So, when I realised I was trans, I simply didn’t have a single role model to look to for what my life could be like. All I imagined was tragedy and devastation. Without inter-generational relationships, I had no idea what was possible for my future at all.

I think that, as queer people, we spend a lot of time dismantling the heteronormative structures and expectations which surround us. We exert a lot of energy in that deconstruction. I think, for the most part, that is incredibly revolutionary and liberating. But it can sometimes leave us in a pile of rubble, with no blueprints to rebuild. That’s a bit how it felt for me in that moment.

You draw attention to a range of unique perspectives that different cultures and communities have had towards gender expression over time. You also explain that the language of these cultures doesn’t easily translate within the framework of English. Can you tell us about your experience of researching these cultures, and provide some advice to others who would like to read more about these cultures themselves?

When I set out to write this book, I knew how crucial it was to emphasise the colonial influence that informs current whitewashed understandings of gender. A lot of 101 trans guidebooks completely omit any discussion of gender outside of a Western colonial framework.

To be honest though, I felt a little out of my depth when I began my research. There is both so much out there on different genders around the world, and also so little. By virtue of the written word, a lot of the nuance that comes through oral storytelling and experiencing the embodiment of these genders was lost.

I also found descriptions that felt very whitewashed and colonial in their wording. I had to be really aware of my own whiteness and its influence on my writing, and I’m sure there is plenty I have overlooked because of the lens in which I operate. For the most part, I felt pretty unqualified to be writing about these different genders, but I also knew that not discussing them at all would be a much deeper betrayal.

Part of my research came from a brilliant book called Decolonizing Trans/gender 101 by B. Binaohan. I learned a hell of a lot from that book, much of which I will continue to grapple with and explore further. I also looked to an interactive map on the PBS website that outlines different genders across history and geography (though the descriptions felt very limited).

I spoke with friends of mine who identify with their cultural genders, and read many other books and resources. I don’t believe I did a perfect job, and there is so much more research to do. But I do hope this will show people that subversions of binary gender have existed for all of time immemorial, and will continue to exist.

My biggest piece of advice is to seek out the voices of people from those cultures directly, rather than going to secondary sources. There are a few suggested resources within The Pronoun Lowdown and, once you’ve found the words for these genders, it’s a lot easier to find places to research.

Language, how we use it, and the way it evolves and changes over time is central for many other reasons throughout the book. Can you talk a bit about this?

When it comes to the English language, it seems like people have pretty short-term memories about its evolution. For example, I’ve had a number of conversations in my life with people adamantly arguing against the use of ‘they/them’ pronouns as a gender neutral singular. Those people seem to have forgotten how rapidly language evolves on a community level.

Within the book, I argue that language changes constantly. There’s a reason why we no longer speak Elizabethan English; in order to truly reflect the cultural changes in our society, our language must follow suit. Within queer theory, and specifically trans and gender diverse communities, language is changing all the time.

I believe the reason for this is, in a big way, because English is an incredibly limiting language. It is the language of colonisers, and can therefore never truly be used to decolonise genders. It is so difficult to find poetry to explore gender within English, and I know this is something that is felt particularly acutely for my trans and gender diverse multi-lingual friends.

You also touch upon the global impact of colonisation on views towards those who are gender diverse. How important do you think it is to situate ourselves in history when it comes to educating others on gender and striving for greater acceptance of diversity, particularly in white Australia where you have written this book?

I think recognising our place within a historical context, especially on stolen land, is of the utmost importance.

Understanding our history and whether we have been oppressed by it or have been complicit in the oppressions of others (often there is a combination of both within our histories), helps us to heal ourselves, our communities, and the world around us. Especially when trans and gender diverse activism has in many ways been whitewashed and falsely ‘pioneered’ by white people (myself included!). We absolutely need to take time to recognise the roots of our movements and the true trailblazers of change, which are almost always trans and gender diverse women and femmes of colour.

It’s also so important to understand that these systems of oppression do not exist as siloed and unique weapons of destruction, but are rather the same tools of discrimination as racism, sexism, ableism, fatphobia, xenophobia, colourism, islamophobia, anti-Semitism, capitalism, etc. They rely on very similar principles and hierarchies of power. In order to dismantle one system, we must dismantle them all.

Throughout the book you scatter wonderful references to prominent trans and gender diverse figures both historical and contemporary, and to positive representations in film, television, and literature. How have these stories impacted you, and how do you hope they’ll impact others?

I don’t think the words I can offer here will ever do justice to how these stories have impacted me. I believe they have kept me alive, and not just in a matter of survival; they have also allowed me to thrive.

Despite these being big, complex topics, your book is very accessible and suitable for a wide range of readers. Can you tell us about the format of the book, its design, and your decision to approach these topics in the way that you have?

I really believe that if you can’t explain something to a small child, then you probably don’t understand it. I think academia serves a lot of very important functions in the world, and at the same time, I think it can often over-complicate things.

I don’t believe it would have been particularly radical for me to write a book that only a few people understand. I want this kind of exploration to be available and accessible to everyone, especially when I’m talking about communities that have less access to formal education and far more barriers in pursuing university.

I wanted the book to be easy-to-read and easy to pick up at any point and just bite off a page or two, especially for my friends who find sitting down to read a book a very overwhelming task. I wanted it to be bright and colourful, because learning this stuff should be fun!

I know it can feel a bit full-on sometimes, especially if it’s not an area you’re familiar with, but the more encouraged you feel to engage, and the easier it is made, the more people I believe will do so with enthusiasm. That’s not to say there isn’t a place for dense theory, or also for unpalatable forms of angry activism and information-spreading. But this book feels true for me. It’s the way I like to speak to people and it’s the way I like to educate.

I’m not perfect. I have a lot more learning to do in my life, and I want to recognise both where I am in my learning journey and also where others are. I want to be gentle with some of the mistakes around me, so I can also be gentle with myself. None of us got to our understanding of things on our own. We likely had others to guide, teach, and show us the way. I would like to offer the same generosity that I have been offered.

How do you hope this book will help others who are going through similar experiences to your own, as well as the loved ones who would like to learn how to support them?

I hope this book will offer a companion to those who need one in an often immensely lonely time of self-discovery and examination. Something that drives me is the attempt to be what I never had growing up. I want to be able to show people that their lives are worth living, that their trans identity is sacred, and that they are worthy of love.

I also want to offer them a resource they can pass onto their loved ones, so that they don’t have to do all of the work and education on their own. Having to educate all of the people around me, when I was only at the very beginning of my own understanding, was an almost impossible task. It takes time, experience, and research to be able to speak on trans topics in succinct and easy-to-understand ways. I don’t think it’s fair to expect that of someone at the beginning of their journey.

So, I hope that this will be a helpful guide for family members and others seeking to be allies. And that, by virtue of taking a little load of their shoulders, trans and gender diverse people will feel extra supported.

The Pronoun Lowdown was published by Smith Street Books in March 2021 and is distributed through Simon & Schuster.