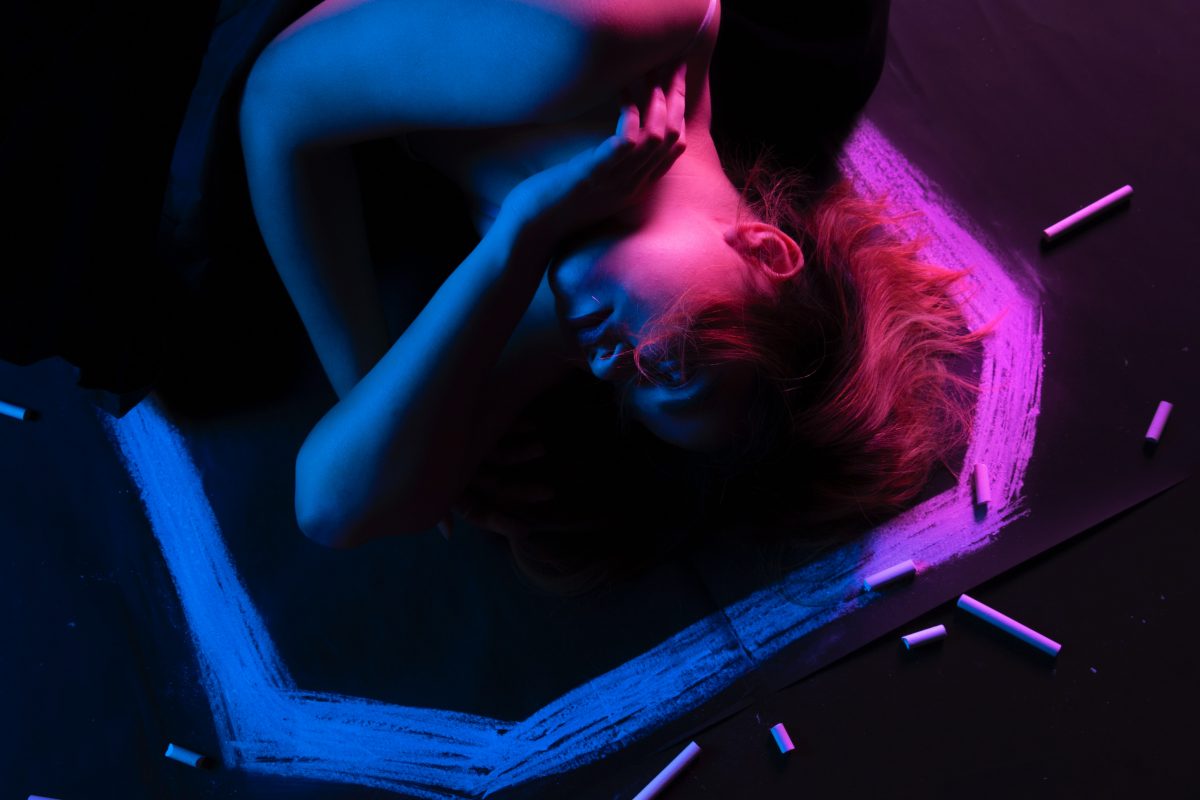 Bisexual Visibility Day, held annually on 23 September, is nominally about bi+ people being able to be seen. Bi+ advocates often note that the “B” in LGBTQIA+ is “silent” – listed within the acronym, but rarely attended to.

Even though many surveys show that we are the largest slice of the LGBTQIA+ pie, there is the least amount of research dedicated specifically to understanding our experiences and why negative outcomes are higher for our group.

Compared to gay men and lesbians, we as bisexuals are more likely to stay in the closet, and sadly we are less likely to think of our sexuality as a positive factor in our lives. Is the issue here “visibility”, or, is something deeper at stake?

In my own experience as a cisgender woman, I know that when I found myself in my first long-term “same sex” relationship I stopped talking about bisexuality. Finally, my queerness was visible, and I found myself accepted into spaces and groups that had previously been very hostile to me.

The flip side of greater queer visibility was, of course, that I experienced more homophobia. There was increased homophobic harassment on the street and other interpersonal tensions, amounting to feelings of exclusion of another kind.

I didn’t want to compromise my newly found belonging to fellow queers by talking about my bisexuality. Letting that silence simmer away meant that all the work I did during that period to accept myself was only ever partial, and the space that I made for other bisexual people was nil.

If you’re like me, you’ll know that internalised biphobia can be a huge struggle and is almost impossible to expunge without external support.

I distinctly remember that when I stopped talking about my own affiliation with bisexuality, I was sometimes very judgemental about friends or acquaintances who openly talked about the problem of biphobia. My negativity toward my bisexual kin was based on three connected assumptions which perpetuate biphobia.

My first assumption was that biphobia is not as serious as homophobia. This is a pervasive belief in some queer and straight circles alike, which warrants urgent attention.

Though surveys show many within the LGBTQIA+ community hold a perception that bisexual women enjoy more social acceptance, data about our health and social outcomes beg to differ. Bisexual women suffer from higher rates of mood and anxiety disorders than our lesbian and heterosexual counterparts and report experiencing sexual violence at higher rates.

Clearly the pandemic has intensified the feelings of isolation that bisexual people already face. In general, bisexuals of any gender are at higher risk of suicide than lesbians or gay men.

There is relatively very little research or theory dedicated to exploring the reasons behind negative outcomes and experiences for bisexual people. Perhaps the view that biphobia is less serious plays a part in this.

In my experience, I know that this belief meant that I spent a lot of effort fighting homophobia (both internalised and external) but not biphobia alongside this. I could not see how these struggles were interconnected, as fights against restrictive sexual and gendered norms. If anything, I assumed that biphobia was really just a problem of homophobia, couched in other terms.

I could not acknowledge the specific oppression that comes from not being monosexual, even though I had experienced this first-hand. In not attending to biphobia specifically, I often repeated the exclusionary attitudes that I had felt others express to me before I was in a “same sex” relationship.

This first assumption is underpinned by the second that I used to make, that the biggest issue facing bisexuals is merely a lack of attention, often couched as “visibility”.

Visibility can be seen as a frivolous request, especially in spaces and scenes that don’t “actively” exclude bisexual people. What is missing from this understanding is that many bisexual people struggle with wanting to be seen at all.

Given the negative stereotypes associated with bisexuality – untrustworthiness, greediness, indecisiveness, contagion ­– the desire to be “visibly” associated with the identity is not straightforward. Bisexual women often experience visibility as objects of sexual fetishization and targets for harassment and sexual violence from straight men.

There is a sense in many queer spaces that acceptance of everyone in the acronym should be assumed, and that being vocal is therefore overkill. Sometimes, demands for bisexual visibility can seem to point out a problem that simply isn’t there, which feeds into the assumption that it is merely a question of attention. As feminist scholar Sara Ahmed has noted, sometimes when you point out the problem, you become the problem.

These first two assumptions coalesce to form what I used to hold as my third assumption, that bisexuals should simply reject any seemingly “straight” desires.

The hetero/homo binary is an asymmetrical relationship, which means that heterosexuality occupies a privileged status in society. It is therefore sometimes assumed that to be on the “right” side of queer activism should mean purging anything affiliation with the “other side”.

Take these lines from Queer Nation’s manifesto, published in 1990, for example:

I want there to be a moratorium on straight marriage, on babies, on public displays of affection among the opposite sex and media images that promote heterosexuality. Until I can enjoy the same freedom of movement and sexuality, as straights, their privilege must stop and it must be given over to me and my queer sisters and brothers.

This manifesto, a key text in queer history, allows room for “queer” but only so long as nothing demonstrably “straight” is involved. If you are bisexual and have a so-called “opposite sex” partner, should you keep them in the closet? Should you refrain from contributing to “public displays of affection”?

Bisexual existence is rendered impossible unless the very parts that make one bisexual, and not gay or lesbian, stay hidden.

This feeds into the belief, and indeed fear, that bisexuals can simply “choose” to be straight if they want to. For this reason, some bisexuals have trouble finding queer partners, because of the lingering threat of “straight” betrayal. Within straight contexts, of course, there are similar assumptions that operate – plus often physically and sexually violent actions – that keep bisexual people in an impossible place between worlds.

What is really underlying these assumptions is the biphobic question – but do bisexuals even exist? This goes to the heart of the matter of so-called “bisexual visibility”. Visibility is not about attention, it is about the possibility to exist, and to have one’s existence recognised.

Queer theorist Judith Butler uses the term “livability” to describe the condition of being able to be intelligible as a subject. If you are not intelligible (read: visible) you can’t really exist, you are not really living.

While we might struggle to want to be seen as bisexual because of pervasive stereotypes and assumptions, biphobia cannot be overcome without validation of bisexual existence.

When bisexual people are accused of being too vocal, or taking up too much queer space, the question that lingers for me now is: why do we imagine that there is only finite space with which to celebrate queerness? Why would validating someone else’s existence invalidate anyone else’s?

I think that all too often the assumptions I have outlined are held by straight, bisexual and other queer people alike, and it means that lots of bi+ people feel pressured to stay silent, to stay “invisible”, that is, to not really “exist”.

All this does is narrow the scope of queer possibility, reinforcing a hard line between “straight” and “queer” worlds. If more bi+ people were allowed to openly “exist” these hard lines would quickly crumble.

This isn’t about thinking bisexuality is more “radical”, it is simply about realising that we can – and need – to smash sexual norms from inside the worlds we so quickly relegate people (often ourselves) to.

I am trying to be more vocal about my bisexuality after years of silence because I see the way that it has not only narrowed my own self-conceptions but has also led to little space-making for others. This was something that I only realised once I was single again and started dating people across the gender spectrum.

I thought that I had done the work to fight my internal battles, but I realise now that achieving bisexual intelligibility requires ongoing work, from allies and bisexual people alike.

This means not assuming inclusion but working hard for inclusion. It means challenging your own biphobic assumptions even if (and maybe especially if) you are bisexual.

We all need to do the work to make this space between worlds not just inhabitable but flourishing. This is what Bisexual Visibility Day is really about: making bisexual existence possible.

Hannah McCann is a Melbourne based writer and academic. She writes on queer femininity, beauty and identity. You can find her on Twitter @binarythis or read more of her thoughts at www.binarythis.com.