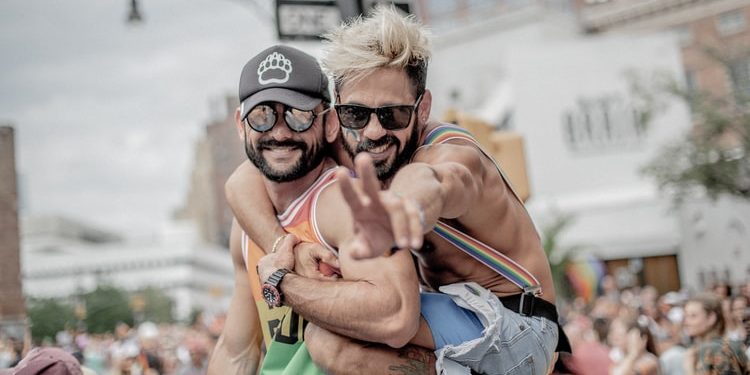 This time last year I was struggling to stand. If you asked what I was having for dinner, it would be something the size of a canapé, except devoid of any excitement (or seasoning even).

Forming simple sentences required every ounce of effort imaginable, and still my words slurred. Months of trained starvation had passed, and I knew exactly what was happening.

Each year, the conversation of the ‘Mardi Gras diet’ gets louder, or at least more public. For me, it reached fever pitch last year. Following a break-up, and with wavering self-worth, looking great at Sydney’s Mardi Gras emerged as something constant – a glittering goal to work towards.

This isn’t uncommon for cis gay men year-round, with ‘fitness goals’ that we’ll go to extreme lengths to execute. Research reveals a huge disproportion of eating disorders in gay and bisexual men over their straight counterparts.

As the National Eating Disorders Association puts it, gay and bisexual men are significantly more likely than heterosexual men to suffer from full-syndrome bulimia, subclinical bulimia and other subclinical eating disorders.

Of the men with these disorders, 42% identified as gay, despite gay men representing a much smaller share of the general male population. Gay men were also found to be 12 times more likely than straight men to engage in forms of purging – a statistic that leaves us no choice but to double-take.

As a cis gay man in the Sydney community, the rhetoric of the ‘gay body’ floods my newsfeed. It’s something I’ve well and truly become indoctrinated into.

That it’s beginning to feel normalised is exactly the issue. I can’t count the number of times I see captions like ‘Mardi Gras diet’ or ‘skinny behaviour’ next to pictures of inadequate portions, as if to glamorise this queer struggle.

For me, making comments like these was the only chance I had to signal something that I had been living with for a large part of my adult life. The ‘Mardi Gras diet’ is the beginning of my community talking about something we need to – except we still manage to hide it behind the buzz of a party, something we know very well how to do.

While the conversation is kept jovial, or limited to an Instagram caption, people like me only feel comfortable hinting and joking, but not sharing in full. We need to have that conversation – with ourselves, the people who care, and the professionals who know how to talk about it when we might not.

At the peak of my eating disorder I went largely unnoticed – if anything, congratulated. It’s not that people didn’t care; it’s that I didn’t give them a chance to. The curiosities of onlookers were answered before they even asked, as I paraded under the guise of a fully-realised ‘skinny legend’ exterior.

I owned my eating disorder this way, huddling neatly under the pop-culture umbrella, and in doing so protected myself from touchy questions – ones that are often worth asking.

The early beginnings of my eating disorder stretched beyond my own quest for six-pack acceptance and ‘skinny legend’ status. It fed into all corners of my identity. My interest in fashion and dreams of finding a career in it came down to a need to resemble its models. My emergence into gay adulthood, and public categorisation as ‘twink’ at the outset gave me no choice but to be the best twink I could.

If Grindr has taught us anything, it’s that sex sells, with muscularity taking top billing. No wonder we’re so hung up on our bodies, when this is the main commodity we’re taught to trade with.

Hunger-induced headaches and mirror examinations were losses disguised as wins. Sleep was a moment to survive rather than restore. I managed it privately, but I knew it would get the better of me at some stage.

When things come upon you so gradually, the hardest thing is remembering when they started. It’s not until I saw photos of myself that alarm bells started to ring – I looked like a different person.

The way that eating disorders masquerade under the guise of ‘body goals’ – as something positive – makes them hard to pinpoint or discuss at length. It’s this essential lack of conversation that prevents us from connecting our unhealthy relationships with food – that which is becoming seemingly normalised – to the broader concern of body dysmorphia and eating disorder in the gay community.

It’s not like I have all the answers just yet. Whilst I’m now in a much healthier place, the lead-up to this year’s Mardi Gras still proved challenging. I was excited to wear a crop-top but met with feelings all too familiar – feelings that are hard to acknowledge and even harder to erase.

A daily debate in my mind about eating is still very much the reality, but one I’ve been coached to win, with the help of counsellors and an uphill self-battle. It’s certainly not an overnight process, but one that began by leaning on my friendships – the ones that actually knew how to build me up.

Whilst the conversations didn’t have to be explicit with everyone, having someone to talk to allowed the noise in my head to clear, so that I could start to listen to what my body had been crying out the whole time.

Jack Crossing is an emerging queer writer (and worrier) from Sydney, Australia. He’s hellbent on coming to terms with the queer experience in the age of taps and swipes, whilst trying to live, laugh and love in between. After recently finding out that the world does not revolve around himself, he’s shocked and upset, but eager to share his story so that others can make sense of theirs.

The Butterfly Foundation offers support for people living with eating disorders. Their support line can be reached at 1800 33 4673 or by emailing support@thebutterflyfoundation.org.au.