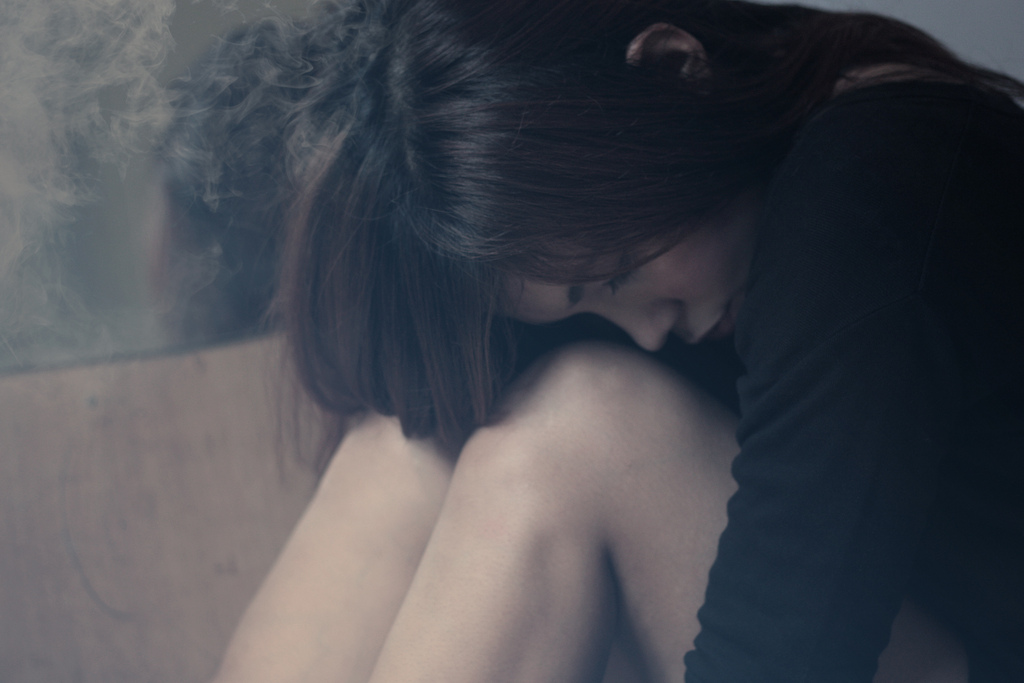 It’s half past five on a Saturday night and I’m in bed, surrounded by books and pens and cups of tea, tapping away on my laptop. It’s been a long time since I shared this bed with anyone, so long in fact that an imaginary line divides it in half, one side for sleeping, the other for reading, writing, working; this is the side I now occupy. It’s almost like having a separate study. Psychologists call this association between a marker (e.g. side of a bed) and behaviour ‘stimulus control.’ It helps me sleep, sometimes. And it helps me work.

I like having control over other things too. My body, for one. It’s strong in many ways, but also unpredictable and changeable, a self-contained weather system. I have a weak bladder, IBS, seizures, night terrors and panic attacks, all of which entail some loss of control over the body. I find it hard to voluntarily relinquish control. Even in moments of passion.

I had a grossly inadequate sex education. I went to a Catholic primary school in the Western suburbs of Sydney where a PDHPE unit called something like ‘Love and the Family’ was offered to the oldest kids. I remember sitting cross-legged on the floor of our demountable classroom while we took turns reading aloud passages from the approved text. It was my first introduction to sex.

Amid suppressed giggles, Liz, a popular girl in our class, volunteered to deliver this line: “The man inserts his erect penis into his wife’s vagina.” And that, children, is sex.

No mention of the clitoris, female orgasm or contraception. To make sure we got the picture, our teacher showed us a birthing video. I can still picture the baby’s round little head.

I was 20 when I had sexual intercourse for the first time. Tom* and I fumbled in the dark in my share house, blue sheets twisting around us, him on top. A searing pain, hot and bright, cut through me, dazzling and terrifying.

My vagina contracted like an eyelid in the face of threat.

Tom rolled off me and I affected sleep with my face to the wall, teardrops dotting tousled sheets.

This happened again and again, with Tom, with others.

Tom giggled every time we tried to have a serious conversation about what was going on. He couldn’t comprehend how difficult it was for me to start this conversation in the first place. How could I explain to him my sense of personal inadequacy? How I felt less, less what? Of a woman? Undesirable? Faulty?

Years later, I was diagnosed with vaginismus, a treatable but frustrating condition that made sexual intercourse painful or, for me, impossible. The condition is caused by the involuntary contraction of the pelvic floor muscles surrounding the vagina. A merry-go-round of fear and pain.

I experience anxiety with other types of penetration too – dental work, going for a blood test, inserting contact lenses, body piercing. My heart races, my palms get clammy, my head spins, and I feel like I’m losing control.

I remember sitting behind Christie, a brunette with freckles, in year 7 maths class. I watched her tug at her ear, twisting her gold earring this way and that. The room around me began to dissolve in a wash of red as my vision blurred and narrowed and Mrs Khoo’s voice stretched out the window like taffy. I remember raising my hand and asking to be excused. I only made it as far as the stairs before hitting the ground. This happened twice in one week.

Body piercing represents a violation of the ‘body envelope’ – similar to the way that blood, gore and mutilation breach the barrier between our bodies and the outside world. It’s a threat to bodily integrity – we ought to remain whole, existing in our surroundings but not infringed by them. So, watching you hook an earring in or pull it out feels ‘gross’ or somehow ‘wrong’.

And so does sexual intercourse.

I hate the words we use. They bring to mind the lewd gestures schoolboys used to make, probably still make: a circle with their left hand, a thrusting penis with the right index finger.

Why doesn’t the vagina entrap? Why don’t our bodies intermingle or fuse or join? Like LEGO or Velcro or jigsaw pieces. Men and women, men and men, woman and women, and innumerable other combinations.

On a recent Saturday morning, I was feeling hung over and blue and crawled into my flatmate’s room. I leant against her bed frame, knees tucked into chest, and watched her tidy, pick up clothes, rearrange ornaments and cosmetics. I talked about my night, how I got to this sorry state. She leant over and rubbed my back, a gesture of comfort – and I flinched. I didn’t mean to. It was a reflex, one I clumsily tried to cover up.

It reminded me of the way my mum reacted many years ago in a café in Glebe. We were sitting opposite each other, mum was sad, I can’t remember what about. Her hand was on the table and I remember reaching over to take her hand in mine – and she flinched. She thought I was going to hurt her.

Neither of us is comfortable with physical intimacy. I was never hugged or cuddled growing up. That wasn’t our way.

About 12 months ago I had another seizure. I was running through Centennial Park when a magpie swooped and attacked. I cradled my ear and felt, then saw, blood. I looked around but could not pinpoint the feathery culprit. I plonked myself down on the prickly grass, tried to slow my breathing by counting. I got a long-overdue tetanus shot that afternoon.

I woke in the middle of the night feeling agitated and restless. I went to the bathroom and was bowled over by a dreadful sensation. I hit my head on the shower cubicle on my way down. I couldn’t understand what was happening – wasn’t I in bed? And then it dawned on me: something awful was happening. I realised I was having a seizure.

My head hurt and red-hot images were flashing in front of my eyes, unspooling like a roll of film. I couldn’t close my eyes, though I tried. I kicked and tried to scream, to make it stop.

After a minute or two, though it felt like an eternity, I woke up howling, hysterical. ‘Woke up’ is too gentle a phrase for how I came to.

I managed to flick the bathroom latch with my elbow, letting my terrified flatmate in.

The cause? Obvious to me, to no one else. It’s because of the blood, the dripping ear, the nurse’s sharp needles, things that seemed manageable until the night came.

I’m scared to relinquish control of my body. Perhaps that’s why I’ve never had an orgasm.

In September, I went on a date with a woman who I instantly felt at ease with. We talked for almost three hours, and we drank. The drinking helped. When we went to say goodbye, I was filled with dread, my earlier sense of comfort all but dissolved. We were standing in a little laneway, outside the bar, in the semi-darkness; we kissed on the cheek. I looked at her eyes a touch too long and realised we were having a ‘moment.’ I said “sorry” and “thank you” and “get home safe.” I hugged my cardigan close to my body, turned on my heel and hurried home.

The discomfort of that first encounter never quite left me and, I’m sad to say, things between us did not work out. It was comfortable and enjoyable, wonderful and tumultuous, and ended the way it began: slowly, awkwardly, uncertainly.

I’m trying to make space in my life, and on my bed, for intimacy. To relinquish control, little by little, and to be comfortable with being uncomfortable; to step outside my comfort zone.

Outside, that’s where the good things are.

* Not his real name.

Tanya Vavilova works with university students from all walks of life as a case manager and program coordinator. She is currently studying creative writing at the University of Technology Sydney. Her bedside table is forever stacked with true crime, memoir and novels about middle-class loners.