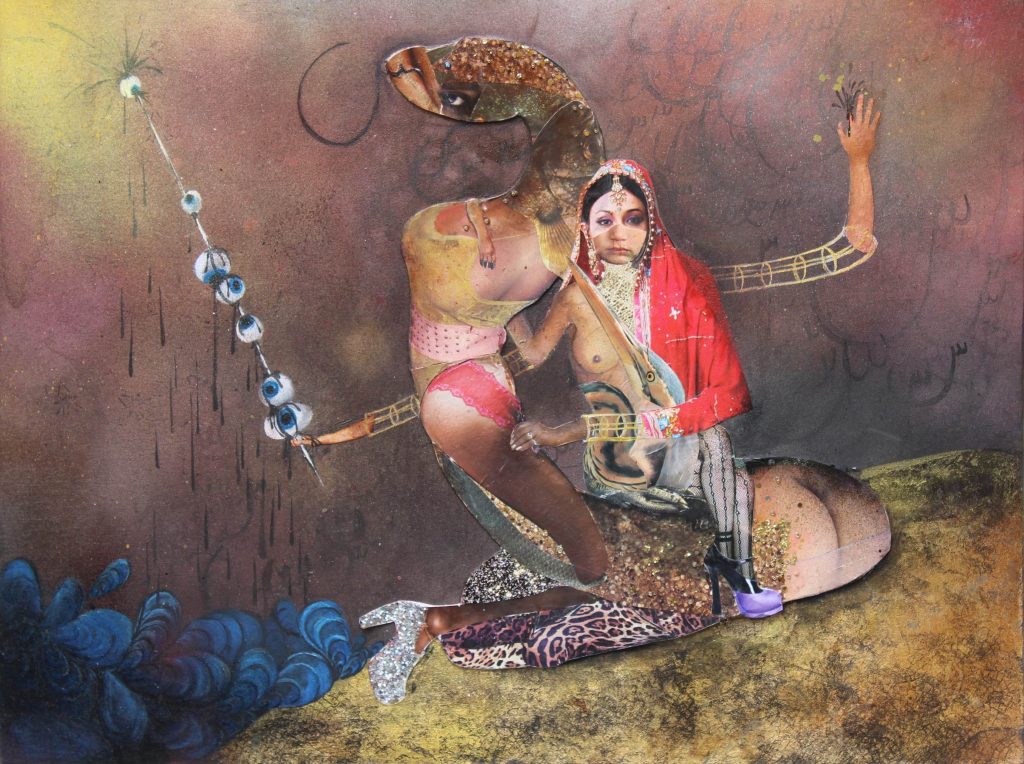 A revolutionary leader, labelled a terrorist by those who des­pise her, but a hero by those who love her. She is the head of an elite band of bearded warriors who know the plains along the Indus River just as well as they do the sand dunes of the Sahara. She is known for her shaven head, long lashes, green eye shadow, killer contour, dia­manté heels and the fact that she never seems 100 per cent human.

Faluda Islam is a Muslim bearded drag queen turned revolutionary from the middle of the 21st century, most likely from this world but perhaps even another. Although she is a drag queen, her body is neither male nor female, not fully human and, one could say, more extra than terrestrial.

Faluda is me. She was born, or perhaps resurrected, out of a creative need to express what I could not, at a time when it was important for an artist of colour – who so happened to identify as queer and Muslim in the United States – to find new ways to interrogate an ever more hostile racist and Islamophobic society.

My practice is spread between multiple disciplines, from textile and video to performance – which is where Faluda comes in. My work in each of these media deals with the possibilities of a future uprising of queer and trans guerrilla fighters. Deemed terrorists,  these glamorous figures are both sub­versive and deeply misunderstood.

Creatures from the Earth – The Spoils of War by Saba Taj

Faluda and I are part of a growing cre­ative movement of artists from Muslim and Muslim­-adjacent backgrounds who envision future landscapes through a queer lens. These artists include Hushidar Mortezaie, Saba Taj, Jassem Hindi and Laylatul Qadr, whose work I will be talking about in this article.

As with many artists who look to the future, Queer Muslim Futurists do so with awareness that it can be an unknown space of potentially great fear, but also tremendous generosity. Like the Afrofuturists from whom the name of our movement is derived, we look to our multiple histories, cultures and legacies, which we cut up, carve, copy, corrupt and then cast into a future of our own imagining.

How might Islam fit into all of this? Why use organised religion as a conduit through which to reimagine a radically different world where queer and trans bodies claim space?

Islam is not merely what many people believe it to be: stories in the Qur’an, the Hadith and many other holy texts are full of visions of the future and other dimensions, monsters, and life on other planets. Descriptions of the Day of Judgement feel like something straight out of an Arab-­inflected Alien vs. Predator remake.

In fact, Islam has always looked to the future. Springing from the deserts of Arabia, it ignited a revolution that overthrew the economic stranglehold of the ruling Quraysh tribe. It codified protection for widows and orphans, enshrined humanitarian rules around the treatment of animals and attempted to pave an end to slavery.

At its core, Islam intends to topple oppressive social orders; Shia Muslims even believe that those on the right side of justice must always be in a state of resistance and resilience.

As with any organised religion, how­ever, there are many problems with how the faith is practised. Muslim societies have put in place their own pecking orders and patriarchal rules. Islam also became an imperial religion: like their counterparts from other empires, those who carried its flag as they marched through the world were not innocent.

Such is the complexity of our histo­ries, and it is precisely these histories that Queer Muslim Futurism seeks to make complicated.

Mortezaie, an Iranian artist based in the Bay Area, explores the nuances of being queer, Iranian and Muslim through back-­and-­forth glances between the future and the past.

His installation Occupy Me: Topping from the Bottom focuses on three figures. The first two are Mahmoud Asgari and Ayaz Marhoni, who – aged 16 and 18 – were publicly executed in the Iranian city of Mashhad in July 2005. To this day, there are debates as to whether they were hanged for engaging in consensual homosexual acts, but the pair nonethe­less stand as a symbol of the injustices of the system that tried them.

Mortezaie’s third figure is Fereydoun Farrokhzad, a gay Iranian singer who was murdered – many suspect – due to his political writing infused with de­mands for acceptance.

Mortezaie does not allow these figures to disappear; in fact, he does not even allow them to die. Asgari and Marhoni are brought back to life by an unnamed power. In this cocoon stage between life and death, they transform into Muslim gay beloveds Malik Ayaz and Mahmud Ghazni, each one a soldier and poet who marched from the Middle East to South Asia in the 10th century.

Farrokhzad is reborn, phoenix-­like, as the pre-­Islamic androgynous deity Mithra of both Iranian Zoroastrianism and Vedic Hinduism – proof that these two cultures have always collided.

There’s a fierceness to Mortezaie’s figures: they are masked yet confronta­tional, and bear the marks of the worlds and lives they once inhabited – a hanging noose in the case of Asgari and Marhoni, for instance.

But Mortezaie does not want to satisfy the Western liberal’s need to believe that their world is perfect. Behind these figures, we see symbols of Western capi­talism, the destructive powers of the Ku Klux Klan and the injustices of Zionism on the Palestinian people. This imagery suggests that things are not always as they seem, and that the oppressive systems around gender and sexuality present in the Muslim world are not always homegrown.

Whereas Mortezaie brings to light specific individuals in acts of res­urrection, Taj, a North Carolina-based multimedia artist, uses the Qur’an and the Hadith as sources of inspiration for a radical future of powerful femme monsters.

In her series Creatures from the Earth, Taj uses collage and painting to make real a new world order in which not only have patriarchy, white supremacy and imperialism been toppled, but so has humanity as a whole. Instead, femme creatures reign supreme, springing forth from the ashes of a world now long gone.

As Taj describes them to me, “These reincarnations emerge and proliferate as warriors and survivors in a violently shifting futurist landscape, marking the end of the world and the birth of another.”

Both the Qur’an and the Hadith make reference to the Dabbat al-Ard (‘Beast of the Earth’), whose appearance will signal the arrival of the Day of Judgement. The name of Taj’s series is a nod to this myth­ological figure, and the creature itself points to something far more present in our day­-to-­day imaginary: the dehuman­isation of Muslims and other communi­ties of colour.

Taj takes these negative stereotypes and flips them around, instead conceiv­ing of what kinds of Muslim creatures would survive a catastrophe induced by human greed.

Qadr, Taj’s partner and a member of the newly formed punk rock band The Muslims, takes things in a slightly differ­ent direction. She uses her songwriting and the band’s presence on social media to exploit a great deal of the fear that American society already has of the Muslim ‘Other’.

The band’s latest album, Jihadageddon, touches on issues of anti­-blackness, col­ourism and issues within and outside of Muslim communities. The very word ‘Jihadageddon’ implies that the world will, in fact, come to an end through a global jihad (which itself translates to ‘struggle’ or ‘revolution’) – a queer, Muslim, brown­ and black­induced Judgement Day.

Hindi, a French/Palestinian performance artist based in Berlin, describes his practice as “Arab future­ fiction”. He takes the idea of the apoca­lypse and propels it into a world where Arabness is not only a global phenomenon but an intergalactic one.

In future friend/ships – performed in collaboration with Bay Area–based artist Keith Hennessy – the state of the Arab world is examined via the ‘post­-utopian’ society of a future realm. Layered on top of his own words, Hindi cites Arab Apocalypse by Lebanese poet Etel Adnan as well as the song ‘Marikh’ by Lebanese band Mashrou’ Leila, whose tackling of sexual and queer themes has been on the forefront of politics in the Middle East.

In Hindi’s retelling, destruction has wreaked havoc on the Arab world; during the performance, he asks, “What is left for us to offer? Our storytelling capaci­ties.” Lighting, sound manipulation and costume reveal an eerie futuristic land­scape: Is it postwar Syria, Iraq, Yemen, levelled to the ground by constant war­ fare until all that remains is the desert? Is it another planet, where Hindi and Hennessy have escaped to? The answer is left ambiguous. 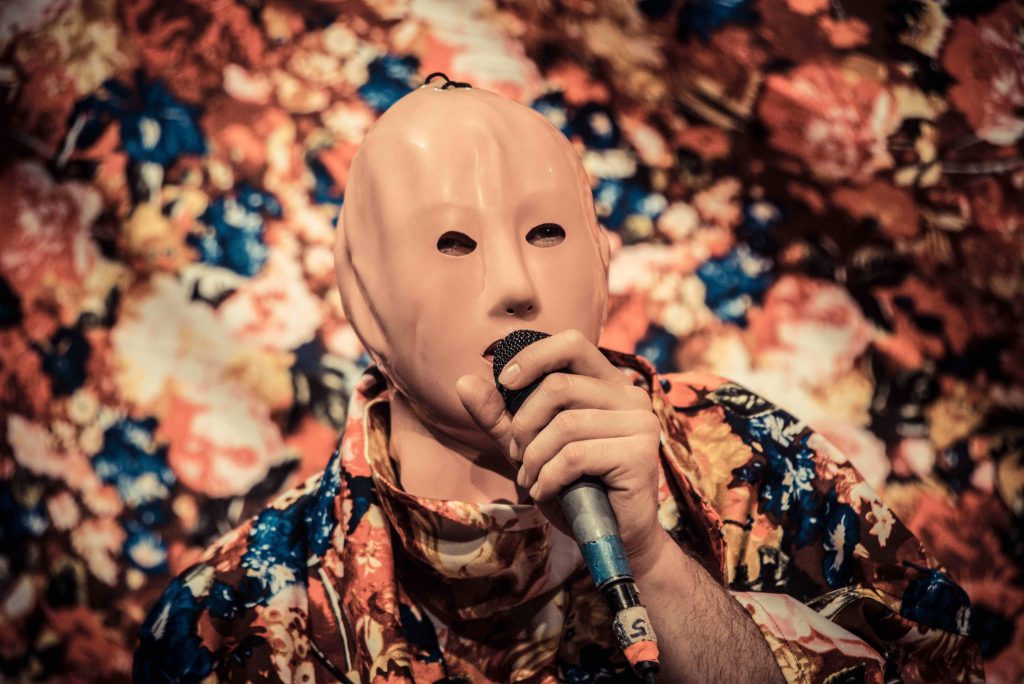 Alongside poetry, lineage plays a large role in the performance. Its opening scene is a parade of portraits of the an­cestors of Arab Futurism (the ambiguous uncle of Queer Muslim Futurism), each of whom is a renowned figure within academia, writing or art. Edward Said, Donna Haraway and Larissa Sansour are immortalised using camp futurist aesthetics, and they are spoken about as though deceased relatives.

But Hindi distinguishes his practice by stipulating that his central ques­tion is “How do we write fiction in the future?” and not “How do we imagine the future?”

In this vein, future friend/ships does not play into any existing narrative of victimisation. What it does highlight are uncomfortable truths about the role of the West in the conflicts and unresolved tensions created by colo­nialism and capitalism. In Hindi’s performance, identity is intentionally distorted: Arabness is presented not as a static state of being, but as shared and crossed with many others.

Islam is the product of many faiths and many cultures; it has never, and will never, stand in isolation – and that is precisely why the work of artists like us is important.

Queer Muslim Futurism is a reclaim­ing of our stories. It points out problems and names our oppressors while, at the same time, creating spaces for healing. It is not idealistic; every world we have created may be born of bloodshed, but it’s what we do with those histories of bloodshed that provides the arc of each story.

Our outlooks on Islam and how it has affected us differ tremendously. For some of us, it is the very essence of our work; for others, it is one weave in a very thick tapestry of identity, history and culture. Taj, Hindi, Qadr, Mortezaie and I are also from wildly different backgrounds – Pakistani diaspora, Arab, Iranian and African­American – and these affect deeply the stories that we author. But, in this revolution, we have risen together.

Zulfikar Ali Bhutto/Faluda Islam is an artist, performer, zombie drag queen, and curator of mixed Pakistani, Iranian and Lebanese descent. His work explores complex identity politics and the intersections of Islam and queerness. Zulfikar is based in the Bay Area, where he works as a teaching artist, community arts facilitator and part-time unicorn.