Gay shame: Orlando and the Muslim community’s response to tragedy 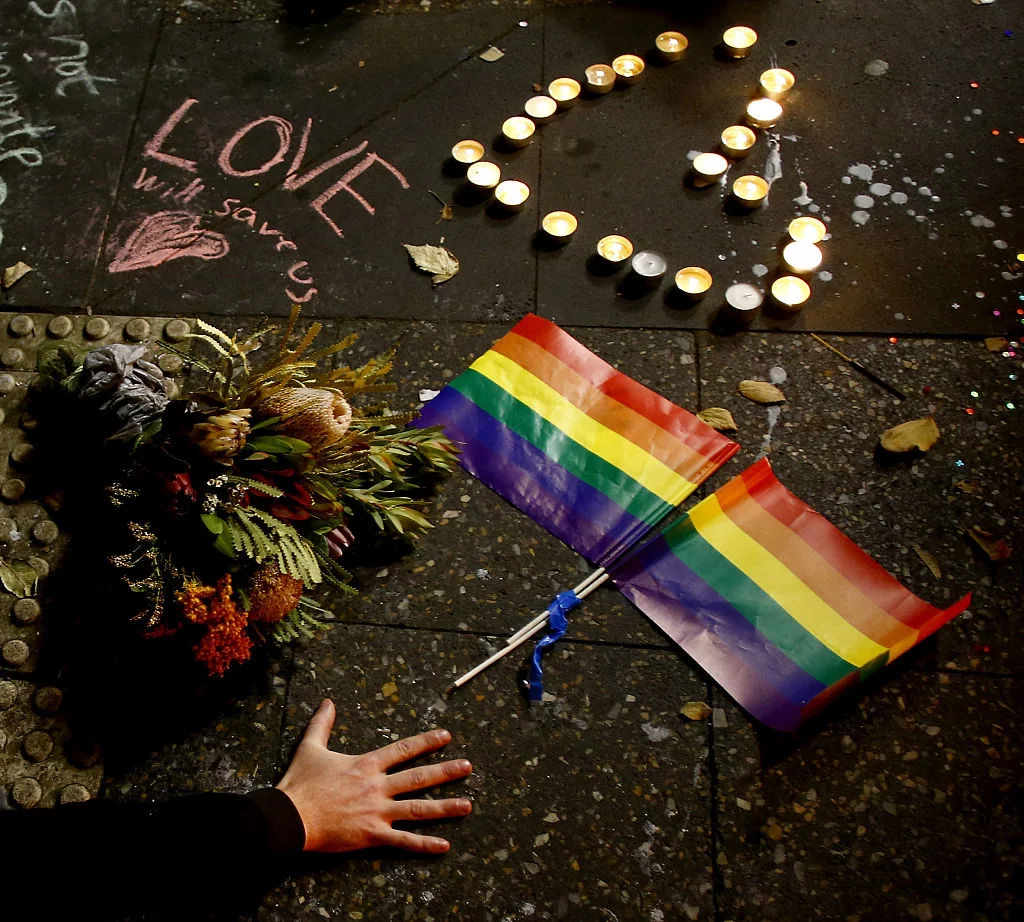 Exactly one week after the Pulse nightclub shooting, my cousin Tariq and I drive into downtown Orlando for a drink. I’ve just flown into Florida for a writing workshop, and my Dad reached out to his old friend Tariq to show me around in the meantime. In Afghan culture, we refer to people like Tariq as cousins – an affectionate designation of both trust and emotional proximity.

As he parks the car, a sense of dread overcomes me. I am keenly aware that we are two visibly brown Afghans and, moreover, that both of us are read as men here. I fear our presence adds salt to the wound. One week earlier, Omar Mateen, another member of the Afghan-American community, killed 49 mostly queer and Latinx partygoers on this very street.

Since then, I’ve been twisted awry with guilt, knowing that, in full view of the entire world, one of my communities had betrayed another so violently. I turn to Tariq in the car and ask the question that’s been plaguing me all week, “How could we let this happen?” Vigils for Orlando were held in many cities across Australia and the world. Photo: Daniel Munoz/Getty Images.

In the year following the shooting, I raised the uncomfortable topic countless times with Afghan-Americans from all walks of life, and the response was always ambivalent. Either they averted their gaze immediately and expressed a somber mutter of dismay, or deflected responsibility for the attack altogether.

“Why do we have to answer for the extremism of an Afghan shooter?” many of them said to me. “White people aren’t ever asked to answer for each other’s violence.” For the first time, it struck me that the alienation and guilt I was experiencing didn’t extend to the more heterosexually inclined members of my community.

The concerns they voiced to me were valid. The racialised double standard at play in the media during the shooting’s aftermath was self-evident. In fact, the guilt and shame that brewed inside me after Orlando had roots in white supremacy, which demonises Muslim and refugee communities and constantly expects the worst from us. When one of us does eventually slip up, the whole world pounces on the opportunity to add to some abstract tally of how much violence is attributable to Muslims.

We are never granted our mental illness, and the truth we disclose always belies some sinister prerogative. Introduce the “Mateen was secretly gay” conspiracy theories into the causal explanation for the shooting and the algorithm for queer Muslim representation in the media becomes clear.

If depicted at all, the queer Muslim is either a mangled silhouette tossed brutally from a building by ISIS or, in Mateen’s case, so unimaginably repressed in his sexuality that he must resort to mass murder.

Both options are laden with shame and lean heavily on gender stereotypes that frame Islamic representation more generally: the threatening and terrorizing Muslim man, and the docile, but oppressed, Muslim woman, who is usually the man’s wife, but rarely, if ever, by choice. In the media, there are no representations of enriching queer Muslim masculinities, and queer Muslim femininity is either completely erased, or endangered and thus warranting of a saviour.

In the end, the media becomes yet another force widening the gulf in the hearts of many queer Muslims, including myself.

All throughout my return to the States, I chewed on the injustice of this again and again. Yet I remained dissatisfied. Omar Mateen was Afghan and, having been raised in the Afghan-American community myself, I know firsthand that my community has a lot of heteronormative bigotry to answer for.

In our own homes, we enable extremist ideologies to develop unchecked, because we are too hell bent on saving face. We only focus on the good within our community because, at times, it feels like the rest of the world is determined to focus on the bad. Afghan-American author and journalist Fariba Nawa frames it as a form of self-protection, “Muslim Americans in general have become so defensive, so fearful of Islamophobia, that we’ve curtailed critical discussions within our own communities about social issues like homophobia and domestic violence.” The reluctance to air out dirty laundry is not only symptomatic of Muslims, but also many other persecuted minorities. However, there comes a time when valuing secrecy over truth feeds into religious intolerance and creates a breeding ground for hatred. The script needs to be flipped, because I’m tired of making excuses for bad behaviour in my communities.

Of the Afghans I spoke to, many tried to persuade me to keep my shame hidden from white people, who we’ve learnt are notoriously quick to jump to Islamaphobic assumptions about us. Indeed, for many months, I kept my guilt and shame to myself, knowing that to concede an inch of responsibility often equates to surrendering a mile of accountability.

What was troubling, though, is that, in my own way, I was once again perpetuating a toxic system of violence. I should be able to suggest that homophobic extremism is a cultural problem among some Muslim communities, while also acknowledging that there are a majority of Afghans and Muslims who do not feel this way.

I’m not interested in an open lettered call out of the Afghan-American community. Far more useful, in the long run, is a call to action. We must not allow the hate we endure from the public to trip us up.

As queer Muslims, we have a duty to dismantle the script of our representation and become the role models we ourselves never had. A genuine commitment to community wellbeing demands that we do better, and that we are challenging bigotry wherever it appears, because every narrative of cultural sensitivity also has a context and a moral compass.

Every young person of colour knows that you can’t just tow the same line as your classmates. We have to do better than everyone else to stand any chance of ever being good enough.

Bobuq Sayed is a writer, multimedia artist and community agitator of the Afghan diaspora. They co-edit Archer Magazine and they are the co-founder of the QTPoC activist collective, Colour Tongues.

Faith, shame and coming out: When sexuality is concealed in fear
By Eva Akyol
Shame and queer origin stories: ‘I’m not wrongly made’
By Archer Magazine
In detention: Gay on Nauru
By Nima
In exile: finding home as a queer woman from a refugee background
By Tina Dixson
Buddhism, diaspora and the challenge of faith in queer communities
By Vibol Hy
Mardi Gras and pride: the vulnerability of dismantling shame
By Archer Magazine
Assimilation, fetishisation and the problem with white queer activism
By Muhammed Taha
Inter-generational trauma: Daniel Andrews, shame and the othering of gay bodies
By Archer Magazine