Fanfiction: Coding homosexuality as a teenager 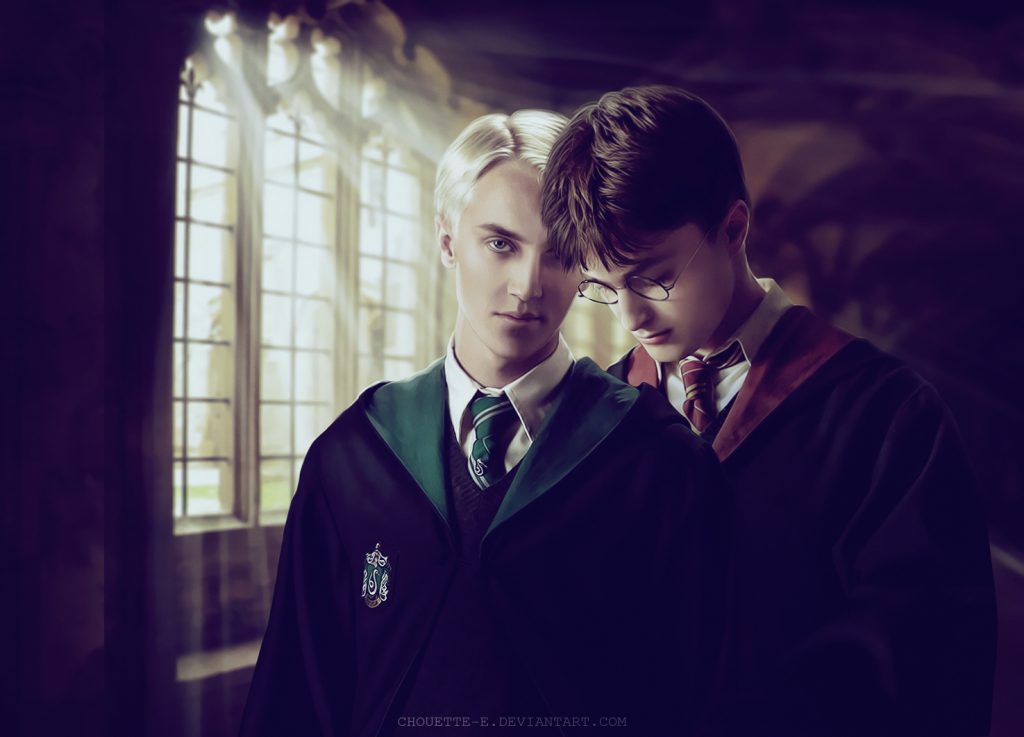 When I was about 15, I was up to my neck in the fanfiction community. I had read the epics, masturbated to the smutty ones, and even dabbled in penning my own teen angst romance creations about the Canadian cartoon, Total Drama Island. They’re still online, but I’ll take my username to the grave.

I loved fanfiction’s user-generated nature; I still do. Anyone with working fingers and an active imagination can remake their favourite stories into their own and ensure that we all get the ending we want.

Since fanfiction is inherently a tool of counter culture, queering mainstream stories is extremely common. And in that automatic otherness stems the hyper-sexualisation and fetishization of queer relationships.

The Harry Potter and Draco Malfoy, or Drarry, fanfiction is one of the most popular of all time. Image: chouette-e.

Gay fanfiction served as my first view of functional homosexuality. It seemed like a perfect avenue to express sexual desire that didn’t involve having or wanting sex, which was a concept I’d been shamed into avoiding.

There is nothing inherently insidious about finding queer relationships arousing, but fetishization is an easy trap to fall into when one’s only experience of queerness is Merlin and Arthur (from the BBC show, not the medieval legend) fucking.

Then I started watching anime, and yaoi found its way into my life. Yayoi is a whole culture and industry dedicated to satiating my weird fixation on two men fucking. In fact, it’s so much a fixture there’s even a Japanese term for women, particularly straight women, who partake in this obsession: a fujoshi, which literally translates to rotten girl.

The language in which fanfiction and yaoi is packaged is enough to demonstrate the problem. Fanfiction and yaoi conceptualizes queer relationships in a way that works to code homosexuality as an inherently explicit phenomenon.

When the yaoi and fanfiction industries market homosexuality as inherently deviant, it leads to the romanticizing of sexually destructive behaviour. Take, for example, one of the most fiercely defended ships (or desired relationships) in anime: Eren Jeager and Levi Ackerman, from the wildly popular Attack on Titan.

That’s not to say violence has no place in a sexual context, but Eren and Levi’s relationship works to conflate non-consensual violence with romance and sexual tension, in some evolved form of “he hurts you because he likes you.”

The raging popularity of these subcultures also pushes the idea that homosexual relationships have a place in society insofar as they satisfy the libidos of straight people. I was no exception to this. Gay male relationships were like a kink, which looking back is super gross and reductionist, especially considering a couple years later I realised I wasn’t as straight as I initially thought.

I appreciate the awfulness of only realizing the debasing nature of queerness in fanfiction when I came to terms with my own queerness, but subcultures are a potent influence, especially on the teenage brain.

That said, fanfiction is not innately problematic. Jennifer Duggan of the Norwegian University of Science and Technology wrote on how the dynamics of Drarry (Draco Malfoy and Harry Potter to the uninitiated) fanfiction is rooted in a world free from the hegemonic assumptions its source material exists in. The primary conflicts in these slash fictions stem from character or plot based impediments, rather than wrestling with the mere fact of their homosexuality.

In this vein, fanfiction and fan-authored mediums provide a valuable way for users to reimagine a world unbound by the hegemonic structures that dominate the mainstream. It could, at its best, be a revolutionary tool in how we interpret and consume media.

But unfortunately, there are many depictions of homosexual relationships in fanfiction that are built on the same heteronormative structures. Many yaoi partnerships are based on the seme (top) and uke (bottom) model, with very questionable consent.

The bottom is given a traditionally feminine sexual role, wherein his homosexual desire is considered taboo. It takes the dominance of the top to “awaken” the bottom’s desire, by essentially seducing the bottom into submission. It is, in every sense of the word, a fantasy and this fantasy was mine and many others’ first glimpses of queerness.

With all this said, we’re not doomed to live in a hyper-sexualised queer vacuum. There have been moves away from these problematic portrayals of homosexuality. Viktor Nikivirof and Yuri Katsuki’s relationship from breakout anime Yuri on Ice is a great example of a healthy, mutually beneficial relationship that exists organically within the source material, rather than because they’re two pretty boys who would look even prettier kissing. There is hope yet, but we still have a long way to go.

Story telling is an act of empathy, and fan authored mediums can be an excellent tool if we make space for queer people to tell queer stories, and straight people to appreciate and uplift this space in their own actions and stories.

Liza is a 21 year old student and writer based in Shanghai. When she’s not writing about being a queer, mixed-raced woman living abroad, she scrolls through memes and contemplates death.