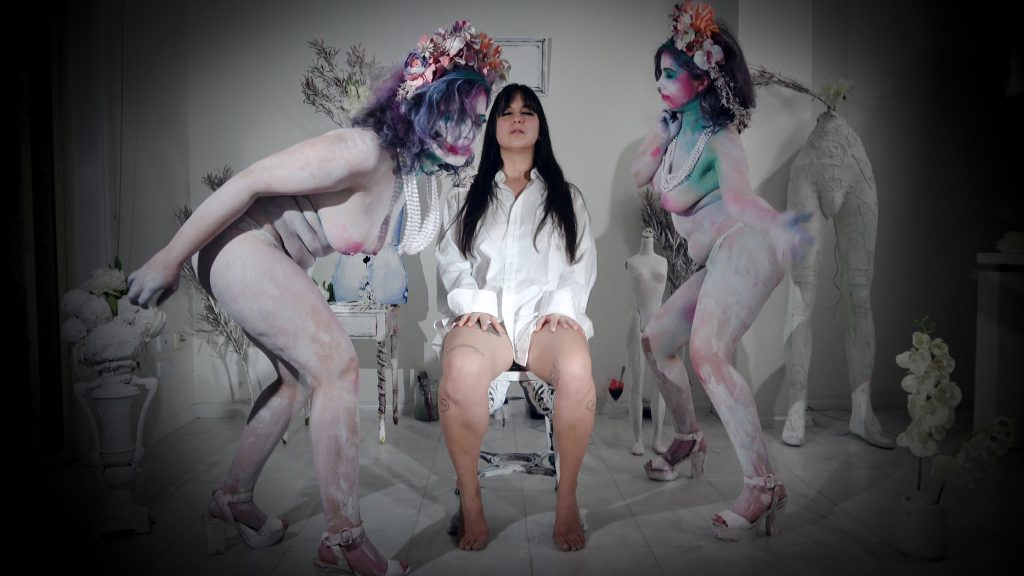 The desires to perform for the camera and for a Dom partner are comparable – and complicated.

Naked, adorably chubby and covered in white body paint, I turn to the camera and shout, “I think it’s time for a spaghetti shower!” The footage jump-cuts to show my 24-year-old self pouring canned spaghetti over my trembling body while screaming, “Spaghetti shower! Aaah, I’m gonna get so clean!”

This continues for several manic minutes, and the video fades to black.

My Dom, sitting on his red velvet couch, looks up from his laptop. He’s perturbed. “That was weird and funny. But I found it upsetting watching a hot girl trying her hardest not to be hot.” Then he orders me to strip.

The gods were in an unusually charitable mood.

The company I worked for promoted itself as presenting ‘natural’ women. This meant we were encouraged to not remove our pubic hair, not wear make-up, nor behave in ways that might be read as performative.

As a filthy femme with an exhibitionistic sexuality, I actually found these constraints uncomfortable. For me, the guidelines to be ‘natural’ became a pressure to contrive my image and sexual expression so as to fulfil a particular male fantasy. I soon also discovered what was popular on the site: generally, the more conventionally attractive women still claimed the majority of attention and repeat work.

So, while the company claimed to subvert the dominant paradigm, it seemed that capitalistic and patriarchal forces were still strongly at play.

I also got pussy fatigue. Look, I’m a big fan of the vag – a favourite pastime of mine is to bury my face in labia. But when you’ve been staring at close-ups of female genitalia all day, every day, you really start to crave the sight of a good, solid cock.

However, the upsides of the work were priceless and, though I had to leave for unrelated health reasons, I would never change my experience.

Finally, once you’ve brought yourself to orgasm on screen a few times, you lose a lot of pesky inhibitions. I’m convinced that this has helped me level up as an artist and become less afraid to ask lovers for what I desire sexually.

I suppose my Dom’s response was evidence of the video’s success. His unease about a hot girl going out of her way to disguise or subvert her hotness was underpinned by the entitled idea that a woman owes it to the world to be attractive. At the time, I ignored my discomfort with his comment because love and lust always turn my brain into paste. So there I was, an arty queer weirdo in abrasively colourful op-shop clothes, being asked to let my Dom dictate what I would wear – altering the very way I presented my identity. I consented.

I’ll never forget our first shopping trip down inner-suburban Melbourne’s Chapel Street, the haunt of slim young humans who spent much of their disposable income on spray tans, manicures and chia pods.

Together, we traversed territories previously unknown to me with names like Wittner, where he bought me heels that cost more than I had in my bank account; Mac, where a nice lady showed me how to make my eyes smoulder; and American Apparel, where we invested in the shortest of skirts and the whitest of knee-high socks.

That afternoon, we returned to his apartment and, excitedly, he ordered me into one of the outfits: a white tank top and a skirt so short you had to squint to see it.

He then decided to take me for a walk around the neighbourhood. I remember my feelings of acute awkwardness as I stumbled along in heels (I had never owned a pair, my mother declaring that heels were a conspiracy against women) and tried to keep the blue skirt from revealing all my secrets.

When a neighbour congratulated my Dom on my short skirt in the comradely tone of a fellow chauvinist, the deal was sealed – my Dom was delighted!

Soon, I was expected to dress this way for most of our encounters – even out in public, where I might be seen adopting this identity that was not mine, but rather a projection of one of his fantasies and his desire to make other men jealous. I was, he said, his trophy slut.

On one hand, I was never completely comfortable with engaging in this type of male-fantasy fulfilment which was about transforming myself into a simulacrum of a more youthful woman. But, on the other, I discovered I liked aspects of it. I liked the alchemy of using make-up and clothes to take on an alter ego and, for the first time in my life, I felt hot. And powerful.

Eventually, I stopped worrying about what my outfits might have said about me and began to revel in the rebellion of it. Yes, I’m a hot slut, but you’d better fucking respect me.

Unfortunately, our relationship began to fall apart in ways that were the dramatic stuff of emotional abuse. Towards the end, his treatment of me was nasty and cruel, and utterly broke my heart. It destroyed the deep trust that is required in a Dom–sub relationship, and disconnected me from my libido for quite some time.

Had our entire relationship been abuse in disguise? Sure, it had turned me on so much, but was I a fool for catering to his desires so completely? Had I betrayed my feminist sisters in doing so? I felt I had handed my identity to him, and now I was lost and broken.

The scenes felt like rituals within which I was inhabiting ugly, strange, untamed aspects of my sexuality. Instead of performing for the audience, I was simply allowing them to be my witnesses.

My collision with that man who I loved caused a nuclear explosion, and the effects were devastating and almost fatal. But now, strange new flowers are growing in the altered landscape of my self-perception, and their scent intrigues me.

I am beautiful, ugly, monstrous, feminine – and lately, as I hold up every single part of myself with curiosity and pride, I feel like maybe I am really fucking powerful.

This article was originally published in Archer Magazine #11, the GAZE issue.