Religion, sex and polyamory: A cross to bear 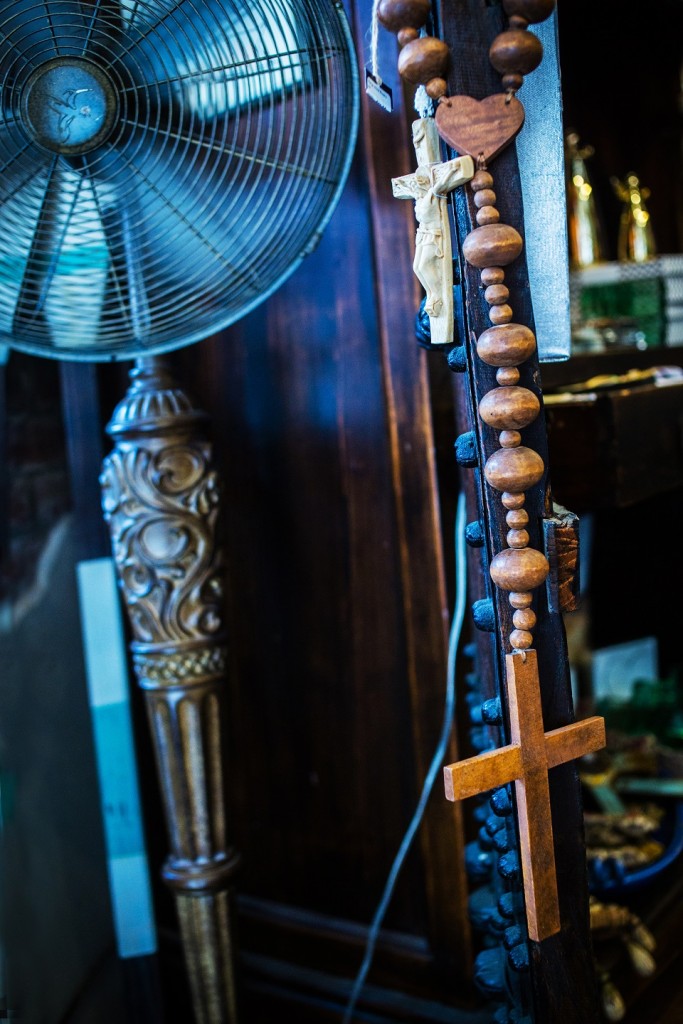 “MUM, WHAT ARE BUTT-PLUGS FOR?” my 12-year-old son asks at the dinner table. I yelp at the question before admitting I’m curious myself.

“Some of those things are huge,” says my 20-year-old stepdaughter, helping herself to another serving of Caesar salad and recounting her recent excursion to a sex-toy shop, to “satisfy her curiosity”.

Later, as I clear the plates, we talk about how polyamory might or mightn’t work, the historical richness of the word ‘cunt’ and the dangers of trying to reclaim it in mixed company, and what it’s like to lose your virginity.

“Don’t rush into anything,” my stepdaughter advises her younger brother.

“I hope you don’t have to wait as long as I did,” their father booms. “It certainly wasn’t by choice!”

It’s a lot for a kid to take in between main course and dessert, but it’s not unusual in our house to talk about sex. Maybe we talk about it too much – there are some parents who think we do. In mainstream Australian society, it’s still considered radical to tell your youngsters that sex and pleasure are healthy and good for you.

But I’m proud of the openness in our family. It’s a deliberate approach I’ve adopted, as a reaction against my evangelical Christian upbringing.

As a seventh-day adventist, I grew up believing that if a penis penetrated my vagina, this had eternal significance. Sex would be something I did with my husband, on our wedding night, and once this had happened we would be ‘one flesh’ in God’s eyes. If I had sex before I got married, I believed I’d be one flesh with anyone I did it with – tied to them, spiritually, for life.

These days, I identify as a polyamorous atheist. But I have to admit that my seriousness about sex, my insistence on talking about it, writing about it and asserting its centrality in human experience, is another way of living out the beliefs I was raised with as a child – that body and soul are deeply, inextricably connected, and that sex has a spiritual dimension.

The wages of sin were death, and Jesus Christ had died horrifically to pay for such sins. My father, a minister and a missionary, preached this from the pulpit every Sabbath, wiping sweat from his forehead with a folded handkerchief. Listening from the congregation, I vowed to be good. But, as many a saint has complained throughout history, the spirit was willing but the flesh was weak.

To paint my parents as prudish puritans would be a gross injustice. There’s something pagan about the way my father loves the ocean; something mischievous about the way he twinkles when a pretty girl pulls up next to him at the lights.

My mother, for all her religious fervour, is a free spirit with a love of beauty and a funny, truth-telling streak. She sat my brother and me down, aged three and five, and showed us a picture book with diagrams of the penis and vagina. She said that sex was beautiful, and that God made it as something to share between husband and wife, and not just to make babies.

I will love her forever for her candour, but I also know my mother is disappointed in me. She wonders if the way I turned out – fallen, sinful and so obviously promiscuous’ – is the result of her own mistakes. To her, there’s something undeniably dirty about sleeping with more than one man.

In traditional Judaism, for example, sex and reproduction are the holiest of acts, in which humans come closest to imitating God, the ‘creator’.

In Islam, sex between husband and wife is considered a pleasurable spiritual duty. Some writings instruct that a man should not leave the bed until the woman is satisfied.

In his book The Soul of Sex, Thomas Moore writes that in our modern, materialist culture, “we have a habit of talking about sex as merely physical, and yet nothing has more soul”. Religion understands this. The way I was brought up, there was never any question that my body and heart were connected, and that the people I shared them with would be important in my life story.

THERE’S SOMETHING beautiful and horrific about the idea that sex can be so meaningful, and have such import to one’s destiny. This belief made the loss of my virginity – with my 17-year-old boyfriend – a solemn occasion, followed by guilt and bitter tears when we broke up.

And it was this belief that made my real wedding, at the age of 20, to the second man I ever slept with, a rushed attempt to officiate the fact that we wanted to fuck. We were so in love. We couldn’t keep our hands and our mouths off each other. We wanted to be one flesh the moment we met, at a church social for adventist university students.

Living together as unmarried university students was never an option, as far as our community was concerned. But being believers, as we were then, my husband and I truly did want to be together until death, and we wanted it to be legal in God’s eyes. It was romantic, and it was biblical.

My mother cried as she sewed my pure white wedding dress, because she’d always hoped the whiteness would mean something, that the wedding night would be ‘special’. She knew I’d stolen the prize too early, but she was glad I was making it right again.

After the wedding, we were like children set free, and we went a little wild. Without the constrictions of our parents’ homes, we started to experiment with all the things that had been forbidden to us: drinking alcohol, eating meat and watching films with ‘immoral’ messages. We read philosophy and literature and sociology, and started to see that the way we’d been raised was just one set of beliefs among many. We began to wonder if God even existed.

Two years later, our sex-life died. My husband no longer wanted me that way and at the age of 22, I was devastated to find myself essentially celibate. We hadn’t lost faith in our vows, and we needed a solution that honoured our commitment to each other, as well as the needs of our bodies.

And so our open marriage came to be.

Taking lovers was a thrilling rebellion against the way I was raised. The first time I slept with a man other than my husband, it felt like a new loss of virginity. After a small string of lovers, I fell in love with someone else. It rocked me to my core, and made me want a simple relationship, where sex and love came together in one complete, monogamous package. Still, I couldn’t be faithful to my lover. Both my marriage and my new relationship crumbled in quick succession, and so did my sense of self. I was no longer someone who could honour a vow. Divorced at 25, I felt like a dirty failure, with pieces of myself torn and scattered between those with whom I had shared my body and my heart.

THE BELIEFS WE’RE RAISED with are so hard to shake. They reside in our bones, shaping our conformity and rebellion. They can seep out in guilt and shame, years after we think we’re done with them.

To this day, I feel tied to almost every person I’ve had sex with; unable to ever completely let them go. In many cases, I still hold them close in loving friendship, until death do us part. Call it pathological, romantic, quixotic, but it seems to be the way I was made: unable to achieve lifelong monogamy, but also unable to discard the seriousness of sexual connection.

Now, in my 40s, making peace with my sexuality is an ongoing project. Perhaps everyone has to forge their own path towards living honestly and ethically, respecting their own desires and the needs of those they love. I’ve been with the father of my child for 17 years. He understands me deeply and we hope to grow old together. The strength of our bond has been proven again this past year, when I introduced him to my new lover, who he welcomed into our family with open arms.

It hasn’t always been easy, and I offer no recipe to make such an alchemical process work for others, but this feels right and true to us. And there’s nothing casual about it – it feels as profound and irreversible as adding a new child to the family.

I’LL PROBABLY NEVER be able to make my parents truly proud – after all, the greatest tragedy of their lives is that they don’t think they’ll see me in heaven – but I try to be grateful for the gifts my religious childhood gave me, including the belief that sex is spiritual, that it holds significance.

I like this idea and I hope to share it with my child. Amid all the laughter, honesty and casual nudity at our house, I want to make it clear that although sex and pleasure are good for you, they are also significant and have consequences for your soul. Sex will become part of your story and part of who you are, so respect that, and find your own way.

Rochelle Siemienowicz is a film critic, journalist, editor and columnist. She has a PhD in Australian cinema and was formerly editor at the Australian Film Institute, and film editor at The Big Issue. Her work has been published in The Age, Kill Your Darlings, Screen Hub and SBS Movies. Her book, Fallen: A Memoir About Sex, Religion and Marrying Too Young is out now.