Polyamory: The love of many 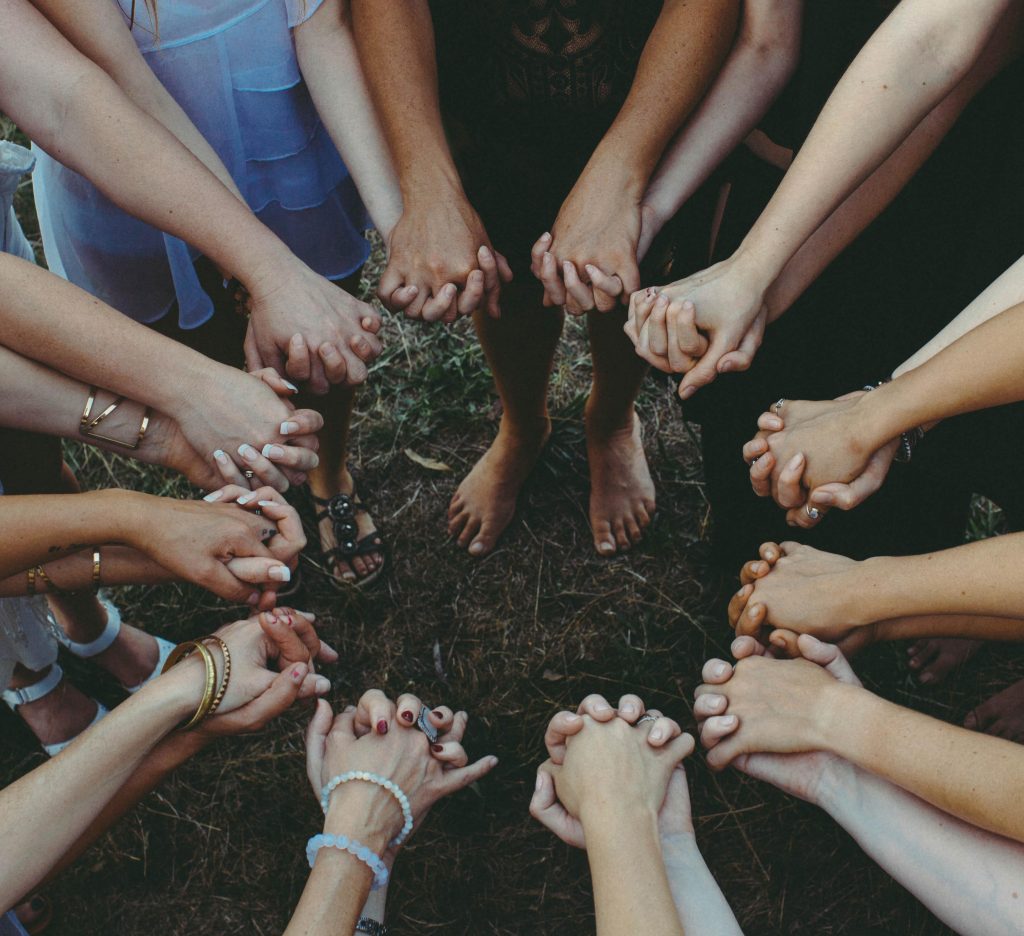 It’s late. I pull the back door of my house closed behind me, taking about four times longer than normal.

I can still smell my girlfriend’s perfume. We had a great date, drinking Malbec and smoking cigars on her porch. My back is sore from sitting on the floor as she read Salman Rushdie aloud to me.

On the kitchen counter, there’s a beach towel and a bottle of sunscreen. Laid ever so carefully on top is a note in my husband’s handwriting: For the beach. Love you! – Justin

I smile. I’m off to the beach tomorrow with my boyfriend – it’ll be my first time swimming in Lake Erie. Justin can’t go because he has to work, but he’s laid everything out for me ahead of my date with my boyfriend.

As I creep into our bedroom, trying not to wake Justin, I see him soundly asleep in our bed, and my heart almost bursts with joy.

I heard the word ‘polyamory’ for the first time in 2009, when I worked up the courage to tell a friend that I suspected her husband was having an affair with one of his co-workers. As it turned out, there was something going on, but she already knew about it: they were polyamorous, she said.

Talking with my friend about her arrangement, I could see she was giddy with the joy it brought her – the opportunities for self-exploration, the excitement, and the way her husband’s relationship with his girlfriend had actually strengthened their bond.

The other married people at my office talk only of their spouses and their kids, their annoying sister-in-law, and their neighbour who starts his mower at the crack of dawn. They never talk of friends, at least not in the present-tense. Every so often, they’ll speak of a friendship but usually as something from the past; a person they knew in school but haven’t talked to in years, except maybe in passing on Facebook.

Before I discovered polyamory, I was the same. I fell into the same trap a lot of other people do: I looked to one person to satisfy all my social and emotional needs. Marriage was supposed to be a kind of one-stop shop for personal fulfillment. Family was more an obligation than a joy, and friends were a footnote.

Back when I was monogamous, I felt pressure to be my husband’s sole source of social support. When he fostered friendships with others, I’d feel inadequate, like I wasn’t doing my job.

This was especially true if I had the gall to let him be friends with someone of the opposite sex.

“What are you doing?” my mother would ask me. “Are you trying to end up divorced?”

It was a common and constant theme in my conversations with others: that I needed to do whatever I could to protect my relationship.

It was as though my relationship was extremely fragile, and under constant attack from outside forces.

In reality, the best way to protect a relationship is from the inside. It’s about building a strong foundation with the person you love, which really doesn’t have a lot to do with other people.

In the years I’d spent on the road, travelling as a jazz musician, I’d seen plenty of non-monogamy, but it always seemed to lack one essential ingredient: mutual respect.

People hooked up casually, but often treated one another badly afterwards, either slut-shaming the person who had shared their bed, or pointedly avoiding one another.

When I saw what our polyamorous friends had together, I realised it was a completely different thing.

“I know you’ve been asking for an open relationship for a long time,” I said to my husband, as we sat in the middle of a fast food restaurant.

We talked for several hours that first night. Over the next few weeks, we went on to form a triad with my polyamorous friend, whom we dated as a couple.

I fell for her. Hard. My first big test as a polyamorous person came after several weeks of dating in that triad.

She apologised, but it hurt. I felt tears come to my eyes. I had told her I loved her, and more than anything I felt embarrassed. I wondered how I could have missed the fact that the connection was one-sided.

I walked outside and sat down on the lawn. I felt numb and wanted to cry alone, but they came out to check on me.

Our triad broke up. Everyone was civil, of course, but I could tell that both my husband and my newly ex-girlfriend were disappointed.

It had been one thing to date someone else together with my husband, but I felt much less secure at the prospect of his seeing someone on his own.

As the weeks went on, I could see how much they missed each other.

I ran into that same wall of insecurity and overburdened expectations, and I wondered why I wasn’t enough.

Looking back on my time in the triad, however, I began to realise that I hadn’t felt that way when I was with her – I hadn’t seen my husband as deficient, or not ‘enough’ for me.

So, why did I expect him to feel that way about me?

By then, it was tearing me apart to see two people I loved suffer so much. Surprising everyone, I approached them both and told them that they should date without me.

It wasn’t easy at first, spending more time alone, but as I went on to make my own friends and date others on my own, I had no regrets.

A common misconception about polyamory is that it’s for people who can’t settle down, or who have a fear of commitment.

The reality is that being good at managing multiple relationships requires a love of commitment.

In a lot of cases, this means shifting gears very quickly. It requires being present for someone who needs you, when you’ve just left a wildly different emotional environment.

I woke up early one morning, still reeling from the night before – it had been my first overnight date with my boyfriend. I was so giddy I couldn’t sleep, so I figured I’d get some writing done before the rest of the household awoke.

Eventually, my husband’s girlfriend came into the room. I glanced up from my work and saw she’d been crying.

“Morning. Are you okay?”

She shook her head.

“Oh, come here,” I gave her a hug. It took her a while to get the words out, but it seemed she had broken up with my husband the night before, while I was in bed with my boyfriend.

“I just don’t feel that way about him,” she said. “I feel terrible that I hurt him.”

“You can’t help the way you feel.”

I spent a while comforting her before going to check on my husband. He wasn’t doing so well.

We’d planned a group shopping trip for that day and, break-up or not, no-one wanted to cancel. For hours I wandered the stores, talking separately with my husband and his newly ex-girlfriend and trying to mediate.

At the end of the shopping trip, I made sure the three of us were sitting in one car together.

The power of friendship is the unspoken story of non-monogamy. Until recently, media focus on polyamory had been largely sexualised: pictures of threesomes, usually a guy and two girls, with lurid headlines. But the reality of polyamory is closer to a chosen family.

Like a lot of long-time polyamorous people, I have a wide circle of friends, lovers and metamours (my partners’ other partners). My spouse and I are at the centre of this family, with countless connections raying off in all directions.

These days, my polyamorous web has a stable cast of characters. New partners enter and old ones exit, but at a slower speed than before. Most of the people I know have a number of long-term established commitments – whether they are marriages, live-in relationships, or a partner with whom they’ve spent a romantic weekend every year at the same conference for the past decade.

Our adventures with others leave us ever so slightly changed, and when we reunite, we see each other with fresh eyes. I currently have three partners: a husband, a boyfriend and a girlfriend. They’re all amazing people.

Life and love don’t have to be about being someone’s everything, or even being ‘enough’ – whatever you take that to mean.

They can be about exploring different sides of ourselves, or parting from our partners briefly, and finding renewed appreciation for one another.

“Have you ever seen Sister Wives?” I ask my mother over a cup of tea.

“Me, too,” I agree. “It’s such a double standard. If he gets to have three wives, then they should all get to have three husbands. It’s only fair.”

I talk with my mother about my relationships for a while, without calling them that. I mention one partner that likes to have long conversations, and another that shares my love of yard sales.

“I’m happy for you,” she says. “They all sound like good people who fulfil different needs.”

“Polyamory?” she says. “That sounds made-up. Is that something from the internet?”

I laugh, and explain that it’s about being open to having respectful, intimate relationships with more than one person at a time.

I tell her it’s about having the freedom to explore love and connection, not just for me, but for each of my partners.

She considers what I’ve said. After what seems like an eternity, she nods and says, “Okay.”

She adds, “And have you seen that Real Housewives show? Spending all that money and still ending up that trashy!”

That’s the extent of our conversation, but it gives me hope.

If my mom can get it, anyone can.

Page Turner is a relationship coach and social connector in poly and kink communities. She is head writer for Poly.Land, a website that publishes content on ethical non-monogamy, and the author of Poly Land: My Brutally Honest Adventures in Polyamory. An unabashed psych nerd, Page has also worked as a psychological researcher and an organisational behaviour consultant. Her new book, A Geek’s Guide to Unicorn Ranching: Advice to Couples Looking for Another Partner, is out now through Amazon.