We’ve pored over this year’s Midsumma program to bring you a selection of events that seek to arouse debate and challenge our views on gender, sexuality and the body.

Author C.S. Pacat joins writers Clementine Ford and Jules Wilkinson in a discussion about man-on-man romance and erotica written by women and the world of ‘slash’ fan fiction. They will discuss why women love to write and read about gay male sex and relationships, the controversy over women using male pseudonyms and the developments in these genres both in publishing and fanfic communities. More info

Quinn Eades’ book launch – All the Beginnings: A queer autobiography of the body

Quinn Eades is a researcher, writer and award-winning poet whose debut novel: All the beginnings: a queer autobiography of the body examines a life marked by both trauma and joy. Join Eades alongside Margaret Mayhem, Essie Thomas, Francesca Rundle-Short, Thomas O’Quinn James and Lily Sawenko.

as they delve into the depths of this poetic memoir. More info

The Australian LGBTIQ Multicultural Council presents a panel discussion with female speakers from a cross-section of the community to discuss a series of hypotheticals, tackling bisexuality, fetishisation and racism in relation to ethnicity and gender. More info 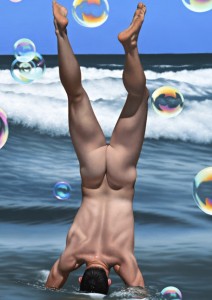 Artist Ross Walker is interested in whether conservatism on social media has gone too far. And he would know: Some of Walker’s own paintings and photographs were removed from Facebook for being too provocative. It was this experience that helped to inspired Censored Nudes and prompted him to ask, why do images of flaccid penises have to be disallowed in public forums targeted at adults?

This is a good question, and also a perfect opportunity for Walker to create this collection of new paintings, limited edition prints and photography that celebrate the male form in all its glory. More info

Queer Identities is a feature of the Queermance Writers’ Festival and seeks to explore the experiences of the diverse identities that make up the wider queer community.

Same-sex attracted and gender diverse theatre ensemble YGLAM explore the intricacies of authentic gender expression in a world that sometimes fails to remain open-minded. Devised by a group of LGBTIQ young people, Breaking the Binary comes straight from the horse’s mouth and lays bare the realities of life for young gender diverse and non-binary people in today’s Australia. More info