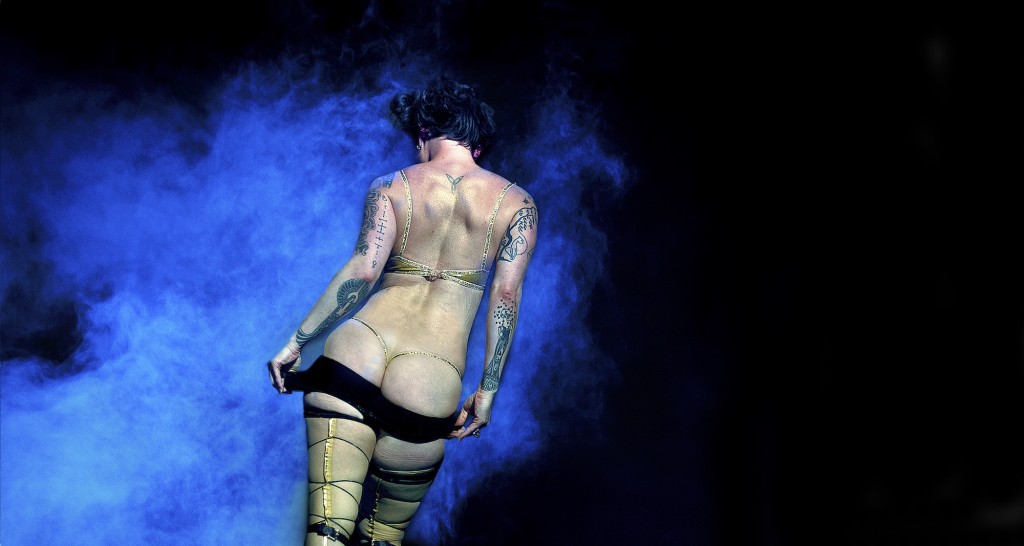 Our Puritan forebears got a lot of things wrong. But they got one thing right: dancing really does lead to sex. For several decades of my life, I looked to sadomasochism as my source of embodied ecstatic practice. Once or twice a week, I’d go to a public dungeon where I would spank or get spanked, flog or get flogged, tie up or get tied-up. And at some point I’d visualise fireworks going off on my ass, or I’d feel my top (the person in the more dominant role) pouring her heart down her arm and through her flogger into my back, or I’d grab my bottom (the submissive) by the scruff of his shirt collar and the seat of his pants to hoist him up higher on the spanking horse and feel his energy arcing across my chest.

And I would become a volcano, with white-hot liquid pulling up from the earth and spilling out to my fingertips and toes and scalp and asshole and cunt. My face would contort, my limbs would tremble, I would howl or groan or shriek, and then I’d convulse in ecstasy. And I’d go home exhausted and sore and happy and ready to do it all again in a day or two.

These days I don’t do that sort of thing all that often; it feels like a journey completed. (The thinning skin and sagging libido of six decades on the planet may have something to do with that, too.) Instead, I dance. Ecstatic dance is both completely simple and utterly complex. When I tried to explain it to a friend – “There’s music, live or recorded, with a heavy beat, and everybody just moves as the spirit takes them!” – she looked puzzled for a minute and then lit up: “Ohhh, like a Dead show!”

Well, yeah, like a Grateful Dead show, full of gyrating, grinning hippies. Or like a toddler, too young for self-consciousness, bobbing and stomping to the beat of whatever’s on the radio. But also like any moment when your brain is too busy for your intellect to work anymore – marathon running, giving birth, getting flogged. When your brain is full enough to spill over, it can’t do the hard work of remembering that there’s a boundary between you and the rest of the universe, and you can fly. Or, to use the more conventional terminology, come.

(A note: the orgasms that happen during kink or dance aren’t like those that happen during genital sex. They come in big slow waves instead of short sharp pulses, and they fill up your whole body instead of hiding between your legs. People who are new to them sometimes don’t recognise them as orgasms at all, because kinkgasms and dancegasms don’t necessarily involve wobbly bits, and don’t necessarily make you squirt or ooze. But sooner or later, most of us figure it out.)

If I’d never done kink, I wouldn’t be able to dance. I come from a family of intellectually freewheeling but physically constrained people; my relatives look at me in horror when I tell them that one of my favourite ways to spend time is writhing and bopping and grinding in a crowd of like-minded others, preferably while wearing as little clothing as possible. But in the dungeon I learned that bodies in extremis are beautiful in their straining, screaming, struggling purity, and so I know myself to be beautiful when I dance. Holding nothing back makes anyone beautiful. Barbara Ehrenreich, in her extraordinary book Dancing in the Streets: A History of Collective Joy, explains that the universal human experience of connection through group dancing, singing and feasting has been quashed by the collaborative forces of capitalism and Puritanism, because people united in ecstasy are difficult to control. She further indicates that the human race is much the worse for it, suggesting, for example, that “melancholy” (depression) increased hugely with the rise of Christianity and the death of uninhibited public celebration.

What other pleasurable activity can you think of that has been shamed and strangled by similar forces? (If you’re thinking ‘drugs’, you’re also correct, but you may be reading the wrong magazine.)

Which is why, when my friends in Melbourne’s sex-positive community told me that they wanted to help me celebrate my 60th birthday earlier this year, I said emphatically into the phone, “I want to dance, dance, DANCE.”

And, boy, did I ever. Melbourne built me the best birthday party in the history of birthdays, with a dungeon in one room and a dance party in another. (Plus face-painting and a kissing booth and an enormous rainbow cake with my picture on it and songs specially written and performed for the occasion.)

I danced all night, buoyed by waves of ecstasy from the mob of people all around me, all shedding bits of clothing as each successive layer grew sodden in Australia’s February heat. By the height of the frenzy, my plump, ageing body was peeled down to bicycle shorts and arch-supporting shoes, and every muscle in it ached – especially the ones in my face, from grinning all night, and from occasionally contorting as the energy stormed through me and made all my molecules bounce like popcorn.

I took a break once to peek into the dungeon. Everyone there seemed to be having a great time. I’d brought a few toys – a lovely cane, a few paddles and my favourite flogger – just in case. I thought about all the beautiful jiggly bottoms and powerful backs and lush breasts in the dance room, and knew that almost any of their owners would greet a dungeon invitation with enthusiasm.

I stood there in the doorway for a moment and thought about that, then I smiled, turned, peeled off my soaking tank top, and started, once again, to dance.

Janet W. Hardy has authored or co-authored 11 ground-breaking books about relationships and sexuality, including The Ethical Slut (more than 160,000 copies sold to date). She has travelled the world as a speaker and teacher and appeared in documentary films, television shows and podcasts. She serves as editorial director for Greenery Press, which she founded in 1992. She lives in Oregon, USA, with her spouse, dogs, cat and chickens.

Queer childhood, exploration and innocence
By Hugh Coldwell-Ross
Parenting and sexuality: The time my son found my FetLife profile
By Amanda Galea
LGBTIQ elders – An excerpt from “Peering Through: Sharing Decades of Queer Experiences”
By Hugh
Trauma and homophobia: Becoming sexual in my late forties
By Peter Thompson
Why we need to recognise older people’s sexuality
By Archer Magazine
Age play stigma: Defending kinky relationships with fiction
By S. L. Finlay
Sex in aged care: Maintaining the wellbeing of older people
By Catherine Barrett
Sex over 70: Better with age
By Doreen Wendt-Weir