Compulsory heterosexuality and the healing power of queer historical fiction 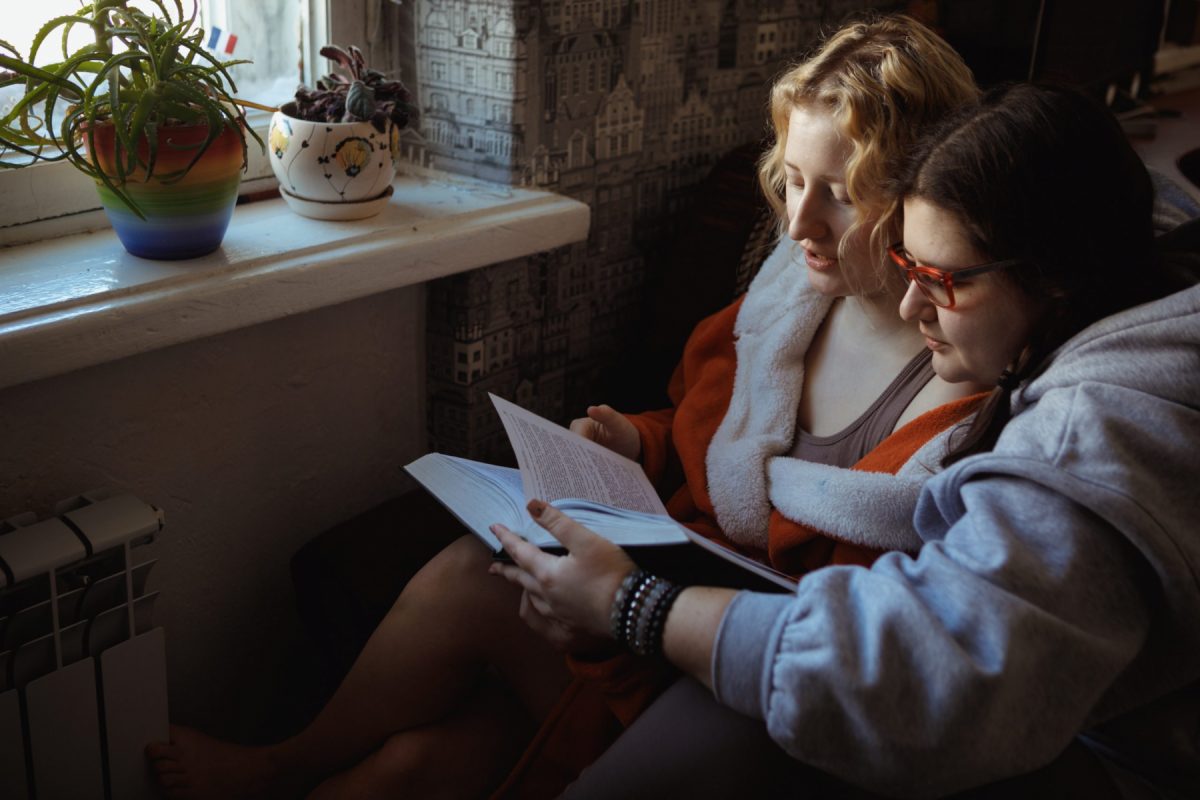 We were friends, as we had been, and easy in our friendship. But at night, when we found ourselves alone in wakefulness, we would turn and lie close together, our heads on the same pillow, in a way that made me breathless… In the morning I wondered if it had happened at all… It was as though we were both asleep, meeting in a common dream.

When I read Hannah Kent’s Devotion, it was in snatches of midnight which echoed the fractured prayers within its pages. I saw my teenage self in protagonist Hanne, despite being eons apart in many ways.

Hanne is a fictional Lutheran teen living in 1800s Germany, facing religious persecution. I was an all-too-real theatre kid attending public high school in 2010s Adelaide, learning what the word ‘faggot’ meant (and realising that I likely was one). Despite these differences, Kent’s depiction of budding queer love felt incredibly familiar.

Hanne – who only ever loved to be within nature, to feel the singing of the river, to curl up by her twin brother’s side – finds herself yearning for the daughter of a new town family, Thea. In her longing, Hanne walks a precipice of loneliness and togetherness, of comfort and moon-lit loss – a precipice many queer people recognise.

Despite Hanne’s heart-racing worry that Thea doesn’t care for her in the same way, they share intimate moments at almost every interaction. They hear nature’s song together in the fog of the forest, and sing their own tales in whispers beneath the planks of the boat which carries them from Germany to Australia.

While I had nothing quite so poetic, fog did roll in – cool and heavy on a dreary Adelaide morning as we waited for class to start.

I noticed her at once. She had goose-pimples on her bare brown legs and I liked the way she pulled her sleeves over balled-up hands so that only the tiniest glimpse of thumb protruded.

We became fast friends. I would chatter and she would tease, and we would lament double maths on a Friday. Later, we would have sleepovers: secretive cigarette evenings and sharp orange juice mornings.

In summer we walked to Blockbuster in blistering heat, our sandals slippery with sweat. In the crisp, cool air we relaxed into one another, skin touching from shoulders to calves as we browsed the movies.

My heart stuttered with her closeness, brazen in the white of the shop’s fluorescent lights.

Female ‘friendship’ allowed us this closeness in plain sight. Just like Thea and Hanne, we were always touching.

It’s a paradox of freedom: both protective and damaging to be viewed only as friends. For Hanne and myself, though, touch and eye contact often provide more than conversation can. In Devotion, Hanne ruminates, “She touched her forehead to mine, and in her closeness came an upswell of something I did not have words to name.”

While Hanne doesn’t have the words to name her adoration of Thea, she feels that it is different than friendship. She also senses she may be ostracised for it. She knows it’s different than what is expected of her.

Aside from her pure love for her twin brother and a pleasant, arm’s-length friendship with a local boy, Hanne knows that she feels little for men. Her mother’s assumptions of marriage fill her with dread.

We might recognise this as compulsory heterosexuality. But Hanne and my younger self only feel, uneasily, that they are somehow wrong in their affections.

I knew it was not exactly what was expected of me, to be warm in the hush of her bed where fingers tangled and lips brushed feather-light across shoulder blades.

We spoke in half-whispers which felt half-hallucinated in the morning, when lavender light through slatted blinds cast shadows on her face. The day was brand new, but loving her in secret was timeworn.

I told myself I must have dreamt it. After all, she only ever held me in my sleep.

Unlike Hanne, I recognised the familiar ache of a crush. I knew that there could be space for me as a queer person – that I could have friends, loved ones, communities who might embrace me.

But, like Hanne, I didn’t know how the object of my affection felt. What would happen if I gave voice to my feelings? If I held her hand at the breakfast table?

We only ever faced it once.

We were at our school formal’s after-party. It had been over a year since I’d last slept at her place, since I’d curled, cat-like into her embrace. My mum had been sick, our lives had been messy, we had drifted.

I brought my boyfriend, a sweet physics nerd who slept under glow-in-the-dark stars, to the party and watched him, charmed, as he laughed with my friends. He was eventually cajoled into a game of beer pong and I found myself – in a sugary haze of teenage drinking – on the tent’s dance floor, surrounded by girls. Women, almost. People I’d known for years.

As my hips swayed, I pondered how long the dying of an era – school – could last. We still had exams and final essays to face, but the night felt like farewell.

Consumed by pre-emptive nostalgia, I almost missed the small hand upon the curve of my back. Almost. But I knew that touch. In many ways, my body keened for it. Under her dark lashes she gave me a look, a recognition, a ‘hello’.

It was suddenly all too much: the pulsing lights, the cranberry vodkas, the pheromone-threaded air of the tent. I fled, shouldering my way through a plastic doorway, and found myself in a dark pocket of the garden.

I heard the soft splatters and coughs of someone vomiting a few metres away. I stood in the shadow of the tent with my hands by my side, drank the air deeply down into my belly, and closed my eyes.

I knew she would follow me. I didn’t know who we had been to each other, but this I knew. I blinked my eyes open in time to see her mouthing my name, eyes locked on mine.

Our lips met before any other part of us did. I felt the soft press of her bottom lip, her lashes brushing against my reddening cheeks. I wondered if she could taste cranberry on my tongue as I could taste earthy beer on hers.

We arched into one another like we had so many times in sleep, and familiarity overwhelmed me. This is how it is, how it should be, how it always should have been.

It didn’t last long. Thumping bass and party chatter shattered the moment. We met each other’s eyes with as much fortitude as we could through alcohol-addled irises.

“I’ve wanted that,” I told her as she threaded her hand through mine.

“Me too,” she said. Then, without any hesitation, she began to lead me back towards the house.

If she hadn’t tasted cranberry on my mouth, she certainly smelt it as we wandered up the side of the tent.

A long-limbed figure hunched over the fence into a cloud of grey-green bushes. They were panting, stomach emptied of the drinks we’d shared only hours earlier. My boyfriend.

I felt her small, soft fingers loosen from mine, and I let her fall away as I strode towards him. Towards forgetting all over again.

While reading Devotion, I started taking notes in my phone. Not about the novel itself, but about the feelings it evoked. About the memories it unearthed.

Reading Hanne and Thea’s love blossom through and beyond words gave me the bravery to unpack my own. As I read Hanne’s wishes that she allowed herself, “to consider the possibility of different devotions”, I wished I’d allowed myself the same. I wish I’d legitimised the longing I’d felt as a teenager, I wished I’d given it words.

While I’d been out as queer for many years by the time it was published, reading Devotion reminded me that literature can connect us to ourselves. It can help us reflect on our own experiences in different ways and process them long after events occur.

Devotion’s publication and popularity are not only a testament to Kent’s enduringly beautiful prose, but also to the ways in which contemporary historical fiction can make queer people feel seen, loved, and represented. Full of magic, light, joy, loss and longing, Kent’s story reaches back into the past and stretches into the future.

Through the transformation and expansion of language and love, Kent carves a new space in historical fiction for queer love. She enables readers like me to consider a future of remembering, healing and making meaning anew.

My child-like affection might not have been the same as Hanne’s absolute adoration of and commitment to Thea. But it was, in its own way, a sort of devotion.

And that is worth remembering.

Marina Deller (they/she) is a writer, critic, and PhD student living and working on Kaurna country. When they aren’t sewing or spoiling their cat, Atlas, they tell stories of identity, bodies, and grief. Their work appears in InDaily, The Conversation, Voiceworks, and was shortlisted for the Rachel Funari Prize for Fiction 2021. They tweet @marinadeller.