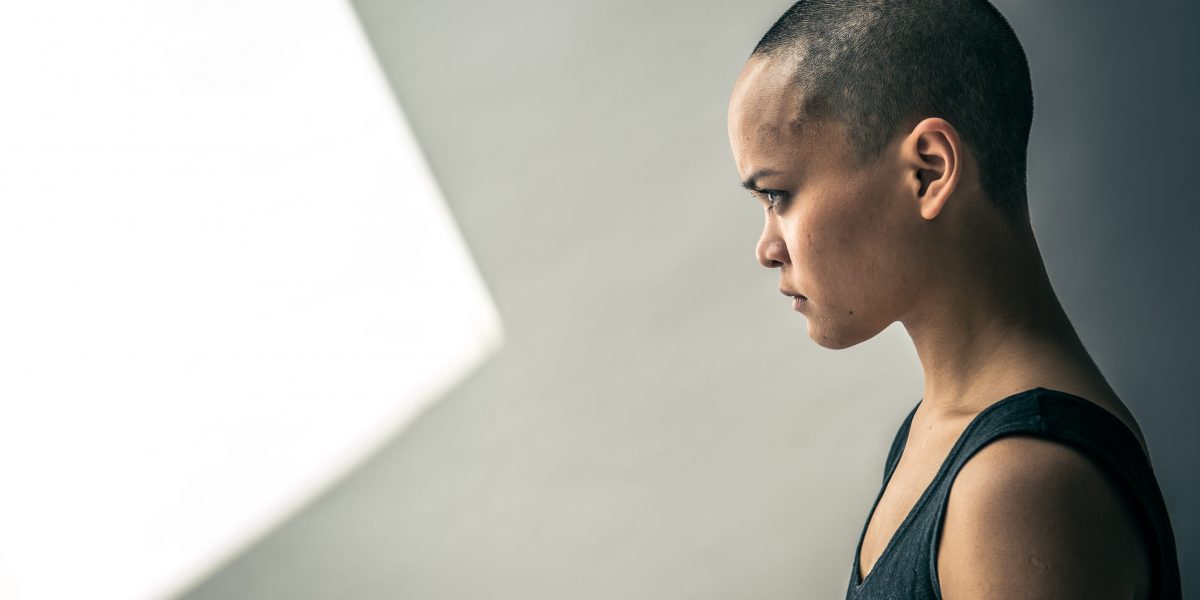 In those heady days, when I first shaved all my hair off, I remember feeling a jolt every time I caught the edge of my reflection. I looked so different that my brain would alert me that there was an imposter standing far too close.

I also remember vacillating wildly between ebullient feelings of freedom and total vulnerability. All was revealed, unadorned. Without my hair I was both free of social beauty norms and more painfully aware of them than ever before.

It had been a long time coming. My loved ones had gotten sick of me talking about it. “When I shave off all my hair…” I would begin and they would sigh or shake their heads – depending on their stance on the subject.

I think this period was almost like ‘beta-stage testing’. I was getting a feel for their reactions in a hypothetical sense, trying to understand if I would be rejected or embraced, should I choose to lose it all.

I don’t know exactly why I wanted to do it. Some sort of queer rite of passage perhaps? Or maybe more of a personal one. Whatever it was, ‘bald’ just felt like me and my longer hair had started to feel like someone else’s.

Eventually, one night, quite sober, I did it.

The first thing I noticed was other people’s reactions – capital R Reactions. More than any other haircut I’ve had, people suddenly wanted – needed – to tell me that they: liked it, hated it, thought it suited me, made me look ill, made me look manly, more feminine, really brought out my eyes, needed to touch it. Whatever they felt, I had to hear it.

Any time I’ve cut my hair in the past, friends and family would either say something complimentary or remain largely quiet about it. Now that I was bald, the floodgates were thrown open. Judgement spilled forth from every direction.

All of this reacting got me wondering why removing some hair (or indeed, leaving some on in the ‘wrong’ places), provokes such intense responses. I had become so polarising I was practically Antarctica.

Perhaps my new ‘do was forcing people to reconsider something about themselves or our shared reality. Perhaps a woman choosing to cut off her hair felt confrontational to them in some way. It is just hair, after all. It grows back.

And yet, across space and time, we hear a different story, one in which hair carries symbolic significance.

Often, losing hair is considered a sadness. Certain medical treatments or conditions may result in undesired hair-loss, or it may indicate mental distress. Some of these readings impact the lens through which people view bald cis women, more so than for bald cis men.

The history of hairlessness is complicated. Some Buddhist monks call it ‘ego grass’, keeping their hair cropped close. Egyptian priests would ritualistically pluck out every last follicle in order to purify themselves.

Many American Indigenous peoples believe that long hair connects them to the Earth and to their ancestors. Then, there’s the Biblical story of Samson and Delilah, with Samson losing all his strength along with his locks.

Wherever you turn, there are stories that centre on the power of hair and the significance of its removal. Today, men can shave their heads without social stigma, but for women it remains taboo.

In fact, it is still employed as a punishment in certain places ­– perhaps because a woman’s worth and beauty have been conflated for so long with her hair.

To some, without my hair, I have suddenly become less of a woman. Some of the privilege that I had as a ‘good girl’ has gone out like the tide, making me realise how gross that privilege was anyway. When you fit a mould, you don’t have to convince anyone that you are decent.

Sometimes it’s obvious, like a mother glaring at me through a bathroom mirror when a child asks if I am a boy or a girl. Sometimes it’s more subtle, like an older man grimacing and shaking his head slightly as I walk past, or a change in the tone of some social interactions.

The shifts are minor, but they have made me more aware than ever of the subtle privileges and injustices that circle us every day.

For the most part, post crop, friends thought I looked great. My father finds my look “awful, just awful”. To my mother, I look unwell and have lost my ‘crowning glory’.

My girlfriend thinks I look like a sweet baby seal (I’m not convinced this is entirely flattering). To some of my cis male mates, I look ‘meaner’.

Personally, I feel like a warrior woman and a baby; some blend of Charlize-Theron-action-hero and a newborn alien. It feels scary but exciting to challenge people’s preconceptions and, on a practical level, this hair is the best. It’s amazing to pat, never gets in your eyes, dries instantly – and I can cut it myself in minutes.

Some days I feel a new kind of femininity, one that feels fierce and womanly and independent of hair, and some days I lean into the freedom that androgyny brings.

I’m feeling slowly more confident in the path I’m tracing around social norms and taboos, across an ever-changing landscape of expectations and identity.

‘Beautiful’ or not, with a shaved head I feel more like myself than ever, and really, that’s enough.

Alice is a Sydney-based writer and artist.