Queer nightlife: The urge to congregate 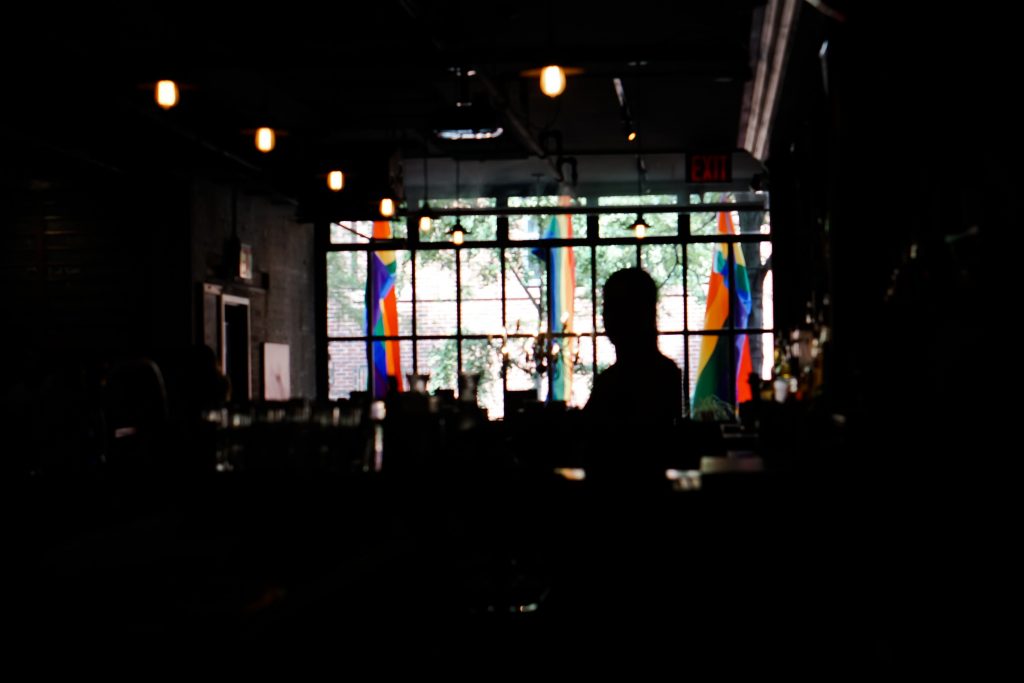 This article was first performed under the title ‘Unity’ at Queerstories for Newcastle Writer’s Festival.

That space between leaving high school and starting the next thing is bizarre. Whether that be uni, work or just, you know, taking up residency on a couch with a bong in one hand and a pipe dream in the other.

That unsettling sensation of transition for me started in the weeks prior to my 18th birthday, which is odd upon reflection, because my birthday was in April and I finished my HSC in November. Like any pre planned event, the lead up was perhaps better than the soiree itself.

For non-Novocastrians, Unity Nightclub was located inside the Sydney Junction Hotel on Beaumont Street, just by Hamilton train station. The club was active from 2012 – 2015 and regularly hosted amateur drag, P!nk impersonators and on one very auspicious occasion, The Veronicas.

I was adamant that my first club outfit would be meticulously curated. This led me, a baby dyke with no idea when it came to apparel, to the then very infant online shopping site The Iconic.

I proceeded to purchase a pair of coral, suede slingbacks firmly against my mother’s recommendation under the guise that they were, and I quote, Trendy as fuck. Naturally, they were brutally uncomfortable.

Like any queer person assigned female at birth in my age bracket, I spent a lot of my youth watching and rewatching The L Word.

Like, to the point my eyes hurt from lack of sleep and the discs were so scratched that the portable DVD player made that awful chewing sound.

I was totally caught up in the fantasy of heading down to The Planet for a couple of cold ones with Alice and Shane.

My entire projection of gay club culture was exclusively based off the retrospectively problematic drama.

I was still firmly in Newcastle and surrounded by a cross-section of community that was undeniably blue collar, with attitudes that make you want to tear your binder off in revolt.

But let’s not kid ourselves here, I didn’t bind at the time, I was still caught in my ‘hippie lesbian’ phase complete with just one stretched ear and a face full of poorly matched foundation that my mother had paid for as a birthday gift from the Clinique counter at Westfield.

Many of you would remember that club pictures were very, very important in 2013. You needed to get all of your angles in front of a background that stated the club name.

Then naturally, you stalked that club’s Facebook page for the following 72 hours to ensure that you were the first of your mates to save and upload that picture to get as many likes as humanly possible. You know, just like a really casual way to determine your value as a human. I ticked that box promptly upon entering the club.

And funnily enough I wasn’t in West Hollywood. Kit wasn’t ushering me in. I didn’t have pals like Dana and Jenny waiting for me at the bar.

As I peered into the sea of bad tattoos, asymmetrical haircuts, plaid and Coopers soaked carpet my fantasy more or less burst.

Moments after entering, a jar was shoved in front of my nose that looked not dissimilar to the ones found in the two dollar shop, you know, next to the toxic cheap candles?

The ones you most likely trapped fairy dust in as a small child – or maybe a bit of fake moss and glitter, arts and crafts style.

Anyway, all this happened faster than I could say, “I’m only a naive 18 year old with no comprehension of drugs beyond weed smoked out of a Powerade bottle.”

I later asked my cousin what it was because I was mildly terrified and she explained to me that it was a popper commonly used by gay men to loosen their muscles prior to sex. It took me ages to work out why a long haired lesbian would offer me something to relax my anus.

There’s a scene in the L word, season 1, episode 4, where Jenny and Marina fuck in the bathroom of The Planet. Tim interrupts them. It is all hot and heavy; yes, it is in a toilet. But you know, it is a nice looking dunny. A West Hollywood dunny. All white and marble. Loads of tense fumbling and up skirt action. When the person I was seeing me at the time asked if I wanted to go to the bathroom with them, I was eager.

Textbook stuff; the door was locked behind me and I was pushed up against the wall. I mean, it was all consensual. I was ready to have my very own Planet moment.

However, all I could think during it was that there is a used tampon sitting on the top of the sanitary disposal unit, a suspicious brown stain above the toilet paper dispenser and even though I was certainly not ‘woke’ at the time, I did have qualms about fucking in the one and only disabled toilet to the dulcet sounds of dykes squabbling.

I tried to get into it, and the moment I did, my older cousin pounded down the door in some kind of drunken statement to simultaneously scold and congratulate me.

Understandably we scattered and I found myself on the dance floor, which was convenient as the first drag show of the evening was about to begin.

Bodies started gathering around me, lights were strobing, smoke was rising and as the queen on stage launched into her rendition of Lana Del Rey’s Summertime Sadness. I started crying involuntarily.

I think it was a combination of being totally fucking overwhelmed, the queen’s lack of synchronisation and my expectation that all drag routines look like Bernadette Bassenger, Mitzi Del Bra and Felicia Jollygoodfellow’s interpretation of Gloria Gaynor’s I will Survive.

Nevertheless, after the subpar performance, I centred myself and found my way to the beer garden. I pulled up a pew and lit a cigarette.

Hindsight has enabled me to peer in from the outside, to understand why people liken gay bars to places of worship.

Four walls that provide community with a space to gather, reflect and celebrate free from the gaze of those who do not belong.

And despite my default setting to hold court from the couch with my better half and our dog, from time to time I still succumb to the urge to congregate.

Kait Fenwick lives and writes on Awabakal country. Their work has appeared in Seen & Heard zine, Butch is Not a Dirty Word, Cordite Poetry Review, Archer magazine and on the walls at China Heights Gallery, Surry Hills. In 2018, they published ‘Burning Between’ their very first chapbook with Puncher & Wattmann.