Living with HIV and the politics of AIDS 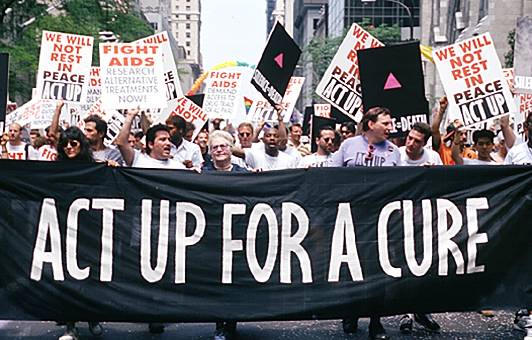 I contracted HIV from the partner I shared a terrace with in Sydney almost twenty years ago.

I realised the virus had entered my blood while I lay in his arms watching ads on the television for the upcoming Sydney 2000 Olympics. My partner cradled me while I complained of fevers and chills.

That night I experienced the first of many soaking night sweats. I was startled awake when thick sweat drizzled from my pores and saturated the bed. My partner was dead to the world.

I had flashbacks to the nights I’d woken up with his sweat rubbing against my skin. I’d towel us dry, not suspicious of anything. Now I stared out the window that backed onto an alley off Cleveland Street, and I knew something was wrong.

I didn’t tell my partner—not yet. He was swept up in the world of drugs and thugs muscling up to each other to be the next hotshot dealer on Oxford Street. I’d come home to find him entertaining a motley crew, sampling the latest meth.

Looking back, I was too lost and lacking any self-worth to do much about it. Sometimes we argued; sometimes I joined in. Mostly I just faded into the background.

The night sweats continued so I carted myself off to a GP at Taylor Square clinic.

The GP was a pleasant woman, sweet and motherly. She told me not to worry and I walked out scared but relieved.

I lost weight, partly from stress, but also from the acute sero-conversion illness. My energy plummeted, and a rash broke out on my neck.

I waited for those test results and cast my mind back to any possible moment of infection.

‘It’s often 3-5 weeks prior to sero-conversion,’ the GP had said. It matched perfectly with Sleazeball weekend.

My partner had promised to score the most amazing crystal meth that day.

I had accompanied him to a house in Darlinghurst while our friends waited at home.

I stood outside the dealer’s house and my partner swaggered in, shoulders squared under his slick bomber jacket. I wrung my hands in anticipation, hoping for a wild night.

We gave our mates a big thumbs up as we dashed towards Bourke Street and approached our terrace.

We blitzed Oxford Street that night, club-hopping from the Oxford hotel up one end to the Midnight Shift and The Phoenix down the other.

Our crew danced and cavorted at a fierce pace. I sculled water at the bar at 5 a.m., eyeliner streaking my skin and staining my cheeks like I’d been punched in the face.

We raced home before the sky lit up and revealed how annihilated we were.

My partner and I stripped and went to bed. I crouched and he manoeuvred himself behind me. I didn’t even think of condoms—he was my partner and I trusted him.

A friend came with me to pick up the test results.

We did the long stroll up Bourke Street distracting ourselves with the gorgeous plane trees and the grand three-storey terrace houses.

We ambled by the Positive Living Centre—a street-level brick compound with iron bars over arch windows and guys in leather smoking out front.

Finally, we climbed the stairs of the clinic and took a seat in the waiting room. My friend and I were fretting. I was 26 and he was just 21. We were like brothers.

Neither of us had known anyone with HIV, or had seen what the virus was capable of.

The GP called us and we sat in her office. She gently broke the news that I was HIV Positive. ‘Five to ten years is the prognosis without medication,’ she said.

Standing on Taylor Square, it felt like the end of the world. The wind blustered and a rainbow flag hung sad and limp from a mast pole.

We slunk down Bourke Street on some kind of death walk, stopping for a beer, then another.

We parted ways on Cleveland Street and I stepped into my terrace. I told my partner I’d been to see the GP for an HIV test, and that it had come back positive.

My partner bristled like a nervous kid but he wasn’t shocked. That’s when he confided details about fucking random strangers. He mentioned swollen lymph nodes and chronic fatigue.

Then he berated me for taking the test. “That’s why people get sick,” he said.

I went to work in a near-catatonic state. I brooded in the marketing office where I did mundane clerical duties.

Everything was futile; I was already dead. My partner and I were locked in a tug-of-war. I wanted to face it and get our shit together. He wanted to party harder and go out with a bang.

I realised my partner had a death wish, so I scraped what money I had together and left town.

When I surfaced, I faced a daunting move to Melbourne where it was tough to find somewhere to live as an HIV Positive person.

I couldn’t afford to rent alone, and sharing wasn’t easy. Disclosing my HIV status wasn’t an option, and hiding the physical and emotional ups and downs would be impossible. I lived in rooming houses and transient accommodation for years.

Many HIV Positive people still live in precarious circumstances. We face prejudice and discrimination from health services, in our work and personal lives.

Logging onto a dating app can be confronting for an HIV Positive person. Reading comments like, ‘Must be disease free’ and ‘Must be clean’ is heart-breaking.

The health challenges we face are complex. Anxiety and depression are very common. It can take years to come to terms with an HIV diagnosis.

HIV medication keeps the virus suppressed but it’s tough on the body. Side-effects like kidney and liver issues, diabetes, high cholesterol, osteo-arthritis and osteoporosis are common.

It’s exhausting to manage the virus and its stigma year after year.

To compound this, AIDS organisations are unduly influenced by pharmaceutical companies, and their agenda has eclipsed the needs of the HIV Positive community.

AIDS organisations are sponsored by a plethora of drug companies who subsidise their education initiatives such as positive speakers’ bureaus, community newsletters and treatment information events.

These organisations stopped fighting for a cure long ago, and have capitulated to the pharmaceutical industry and the promotion of their drugs.

While living with HIV in 2019 has improved, it’s far from easy.

Thousands are dying of AIDS around the world.

James May has written extensively for the HIV/AIDS sector. His work has also appeared in The Guardian, The Sydney Morning Herald, the LGBTIQ press and various creative writing journals.