Out of the archives: Animal Liberation at Mardi Gras 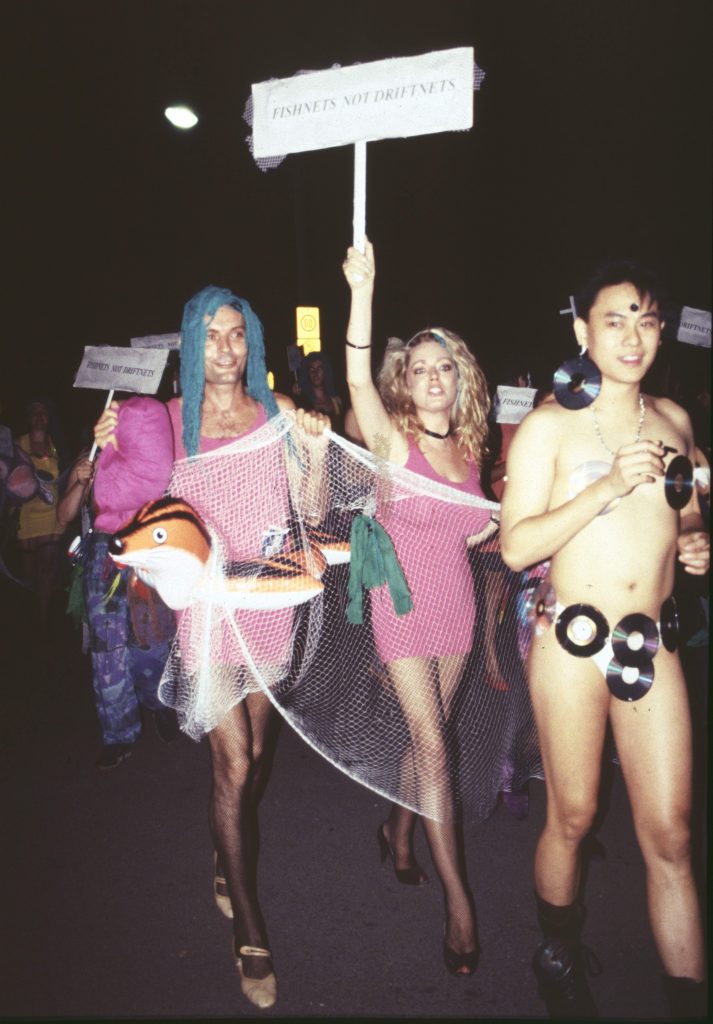 Out of the archives is a new series from Jess Ison looking at queer her-/their-/his-tory in Australia in collaboration with Nick Henderson from the Australian Lesbian and Gay Archives (ALGA).

Criticising Mardi Gras is not just an annual social media sport, but also a queer rite of passage. Whether it’s not enough portaloos in the staging area, or contempt about corporate sponsorship, we’ve all had something to say. Some of this annoyance has been aired over a latte in the gaybourhood, and others have taken to more direct protest.

As one of the loudest and largest queer gatherings in this country, it’s no surprise that we have debates over what we want the parade to be and how it should be run.

Come with me as we delve in to this little-known tale.

The first Animal Liberation float in the parade was in 1992. Lynda Stoner (yes, she was in Prisoner) organised the first float, themed ‘Fishnets not driftnets’.

In the grainy images that were a lucky find in the Archives, you can see people covered in fishnets and some pretty great 90s regalia. There also appears to be a contingent of animal activists marching in front of Animal Liberation, including the rather spectacular Vinyl Man.

After seeing the image of Vinyl Man we found an article about him in a 1992 issue of the Star Observer titled “Dykes and fags taking on yobs for ducks.” In the article, three activists were interviewed about protesting duck shooting. They revelled in being proudly queer on wetlands in NSW and talked about how the shooters regularly yelled homophobic slurs at them. 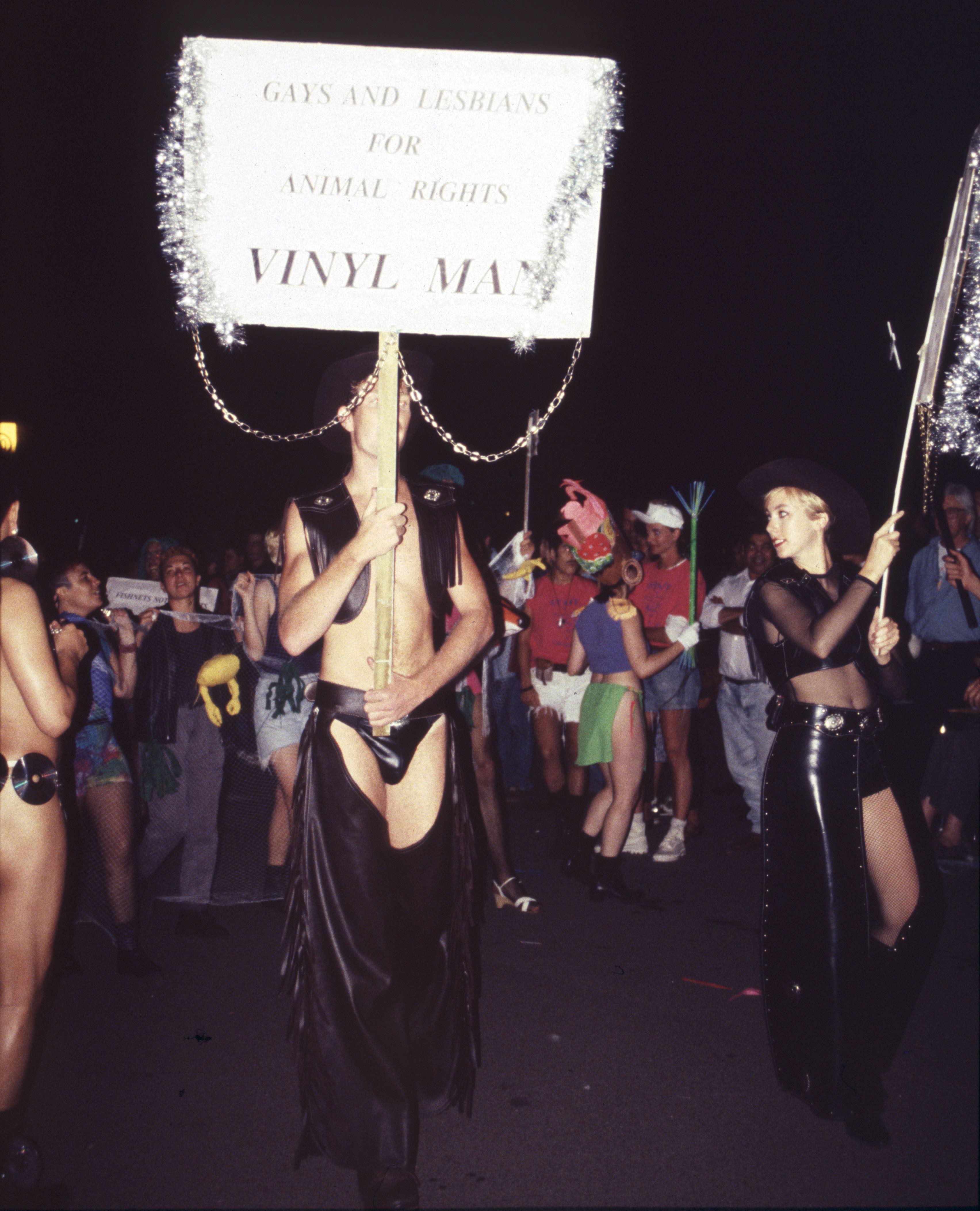 In other obscure information, 1992 was the year that the Sydney Gay and Lesbian Mardi Gras (SGLMG) Board responded to concerns about the number of straight people attending the post-Parade party by enacting a rule that tickets would be restricted to Mardi Gras members and their friends.

And, in 1994, Mardi Gras enacted a rule that Bisexual, Transgender and Heterosexual people applying for membership of SGLMG must demonstrate their support for the Gay and Lesbian community.

Back to Animal Liberation. After the first parade contingent in 1992, there was a hiatus for a number of years. Indeed, the next float was not until 2007 with the theme Vegetarians Taste Better. This audacious theme saw them nominated for the Most Creative Float Award.

The tension started in 2009 when Animal Lib marched with the theme ‘Cows are cool, Leather is cruel’.  Given the importance of leather in some of our fetish and kink communities, this was bound to be at least a bit controversial. Some Animal Liberation people I spoke to for a forthcoming longer piece on this topic have reported an altercation on the night between Animal Liberationists and leather clad folks who took offence at the theme.

We’re not sure if this altercation is what led to Animal Liberation banned from marching the following year, because a lack of transparency in the parade decisions limits the ability of the archive to record such decisions. Instead, rumours abound as to why they were not allowed, and this altercation is a key one. 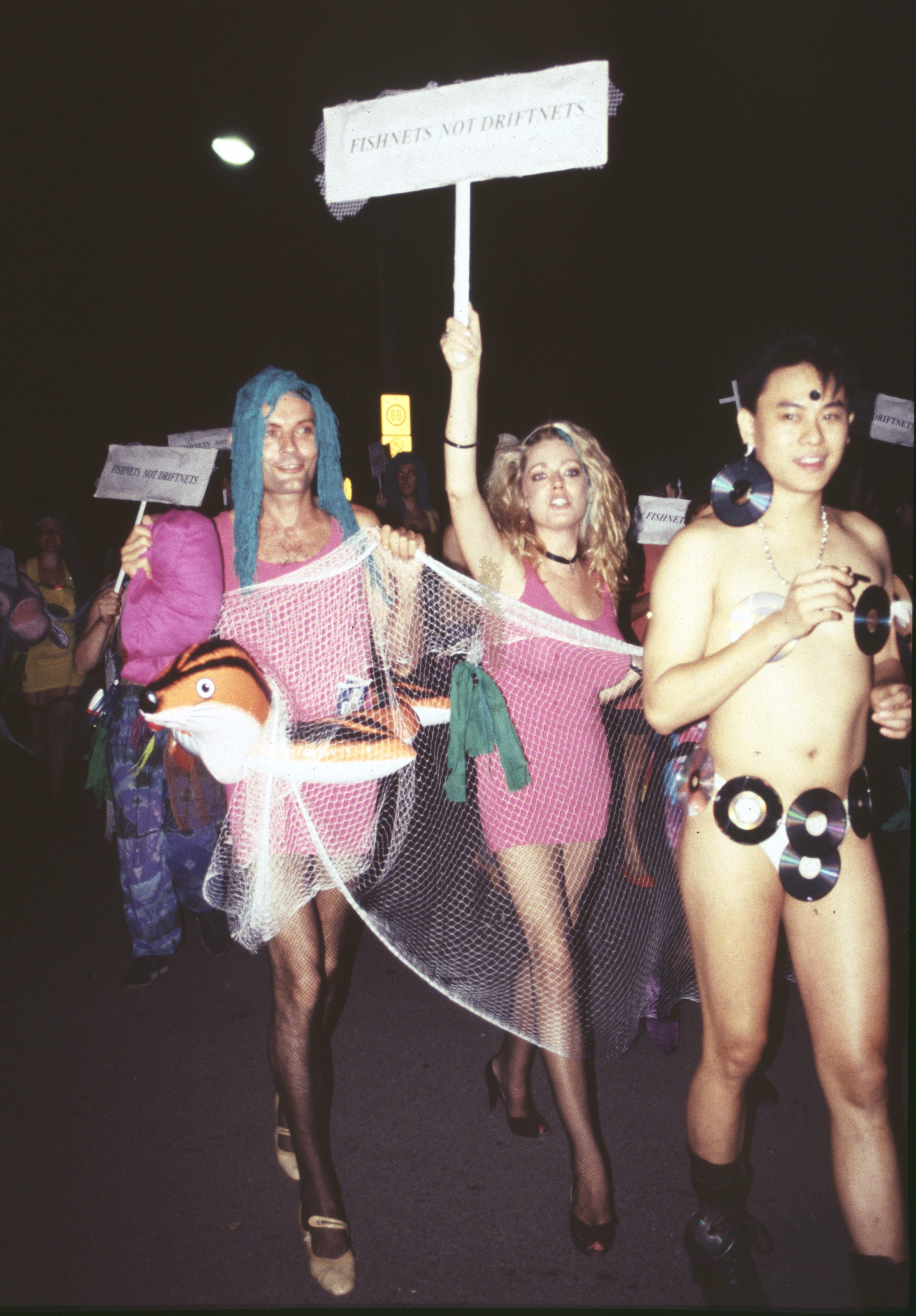 Looking at Mardi Gras history, we can see regular disputes about who is allowed to march in the parade. For example, some take umbrage with groups who aren’t specifically queer, such as corporations and political parties. And, of course, there has always been some strong resistance to the police and the military marching.

In some of the reporting about Animal Liberation being rejected questions were asked about the inclusion of groups such as the Raelians who were targeted for being ‘too weird’, which to be honest, is probably a fair assessment.

Due to the considerable community outcry – and perhaps at the expense of the poor Raelians – Animal Liberation was allowed to march in 2011 and did so for the next few years. The last float was in 2015 due to the costs associated with having a float – an issue currently being raised by Pride in Protest.

This brief history opens up many questions about who should be allowed in the parade. Just this year the NSW Teachers Federation was not given a place, and after considerable flak, the Board reinstated them with some weak apologies.

It seems that the tensions are still running deep. This year also saw a protest against the Liberal Party for their horrible refugee policies, and the marriage equality vote. The continual discussion about which corporate sponsors, such as the Meat & Livestock Industry, should be allowed, bring in to question the shifting nature of Mardi Gras to an explicitly less political agenda.

Despite this, Mardi Gras does like to ruffle some feathers (see what I did there?). The archives demonstrate many examples throughout the history of the parade of debates over who should be allowed to march.

What the Animal Liberation float in particular shows us is the shifting nature of Mardi Gras throughout history, and how the community has responded to different tensions. It prompts us to consider who we may consider ‘queer enough’ for a place in the parade.

Nick Henderson is a curator and archivist, with a passions for collecting, preserving and celebrating Australia’s queer and gender diverse histories. On most Facebook groups Nick can be found spamming articles or images from the Australian Lesbian and Gay Archives, or trying to seduce newby volunteers to join the archives.