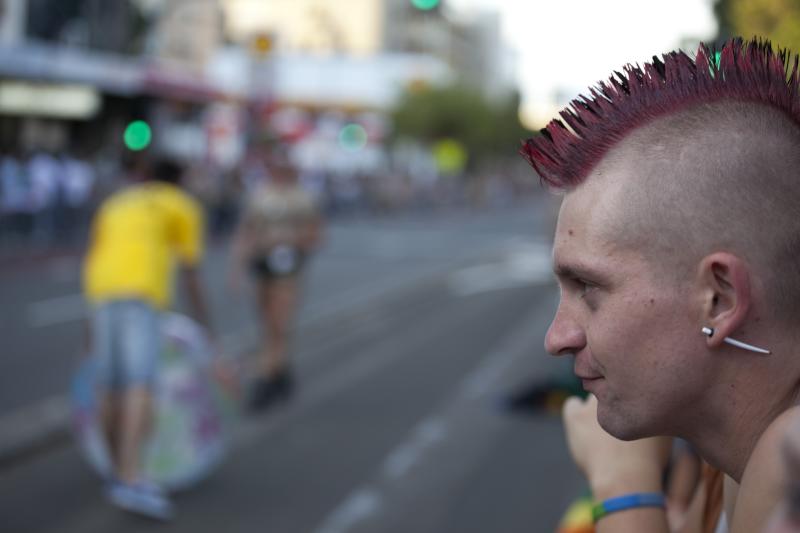 Having been brought up on a steady diet of the gay and lesbian section of Blockbuster Newtown, I can say that my movie taste is pretty low grade. In light of this, I can be forgiven for loving the new film Riot, which was released in time for this year’s Mardi Gras and dramatizes the lead up to the first ever pride parade held in Australia. The film captured so much of the feel of Sydney and had some hilarious queer moments that made me want to click my fingers in solidarity.

The ending was complete crap, though. Lance Gowland would be rolling in his grave if he saw a version of himself chatting with the cops after they’d just beaten his comrades.

The politics of Mardi Gras were never just around gay and lesbian struggles. In the film, we see the characters shout a popular chant of the time, “Stop police attacks against gays, women and blacks”. Early gay liberation was founded on efforts to challenge not just heteronormativity, but also patriarchy and racism. Whether people in the movement actually lived by this mantra is not always so clear-cut.

Many are hostile to the corporatising of Mardi Gras. Photo: Andy Tyler. Licensed under Creative Commons 2.0.

Today’s Mardi Gras spouts a progress narrative that puts oppression in the past, because now we can get married and everything is hunky-dory. We see Pride parades, particularly in the west, overrun with corporations, agents of state violence, such as police, and right wing groups. The recent Mardi Gras in Sydney was, of course, no different.

This is the inevitable outcome of a politics that takes the easy route of assimilation, over the harder road of changing the terms of the debate. Mainstream gay politics has willingly joined the privileged and, in doing so, is complicit in oppressing others. We can see this clearly with the damn Liberals in the Mardi Gras parade this year (and Labor, for that matter).

However, this year, the Department of Homo Affairs disrupted the Mardi Gras parade by marching in front of the Liberal party with a sign stating “Turn back the float! Justice for refugees”. They were dressed as Border Force officers and handed out flyers in the tradition of queer protest: hilarious, camp and political. One particularly exciting moment was when an elder queer yelled out “Make the Mardi Gras political again”. Also, a Pink Anarchist group leafletted and disrupted when they could and an article I wrote about the parade in Star Observer resulted in a personal email from someone in the Liberal Party. Life goal, check.

There have been other responses to Pride parades overrun with bad politics and problematic corporations. In Naarm, the Midsumma parade has been disrupted for the last few years. People have stopped the parade to protest the inclusion of corporations and the police. This has been met with a variety of responses, though generally the crowd have been negative, even spitting on protesters and trying to physically remove them. This year, the police physically assaulted at least one trans person.

Disruptions of corporate Prides have been happening internationally as well, though we mostly hear about those happening in the US. For example, a recent article on Feministing reported that four young black LGBTQ activists who held a demonstration at the Pride parade in Stonewall Columbus were arrested. Three of the young people have so far been found guilty on six misdemeanour charges, and the fourth still faces a felony charge. The chair of the Stonewall Columbus board helped testify and convict each of them.

Having people from our communities arrested at Pride for disrupting the parade is so bleak.

Historically, we can turn to look at ACT UP (AIDS Coalition to Unleash Power) for their disruptions of Pride parades, and for using their bodies in queer resistance on the streets. Despite their own issues, it is still exciting to learn about the many ways ACT UP orchestrated protests that were about a more radical queer agenda than some corporations with a rainbow slapped over their logo and a banal claim for equal love. ACT UP literally used the dead bodies of their loved ones, taking them to the streets and demanding change.

In light of the postal vote in this country, more radical queers are now facing a huge challenge: the State is claiming that we are equal. Those of us who are precarious workers, face inequality due to gender, race, ability and more, do not have the luxury of even pretending this is true. We always knew that the comfortable middle class gays would retreat from their 20, 000 strong protests after they won marriage. The sheer fact of the Liberals marching in the parade this year proved us right.

In going forward, we will have to look back at our history for lessons, and learn from those protesting now. We need to avoid succumbing to crumbs that homonormativity offers and demand nothing less than liberation. We know that the only way we have ever been heard is by disrupting. The chant at the first Mardi Gras was “Out of the bars, in to the streets”; perhaps this will need to be revived. Though, I guess because of misogyny and the privileges of some in our community, there are only gay male bars now. So it may just have to be “in to the streets”.

Jess Ison is doing a PhD and tutoring at La Trobe University. She is a representative for the Institute for Critical Animal Studies, a rescuer for the Coalition against duck shooting and an editor for Writing from Below. Jess can be found most nights ranting about prison abolition, fermentation and high heels.