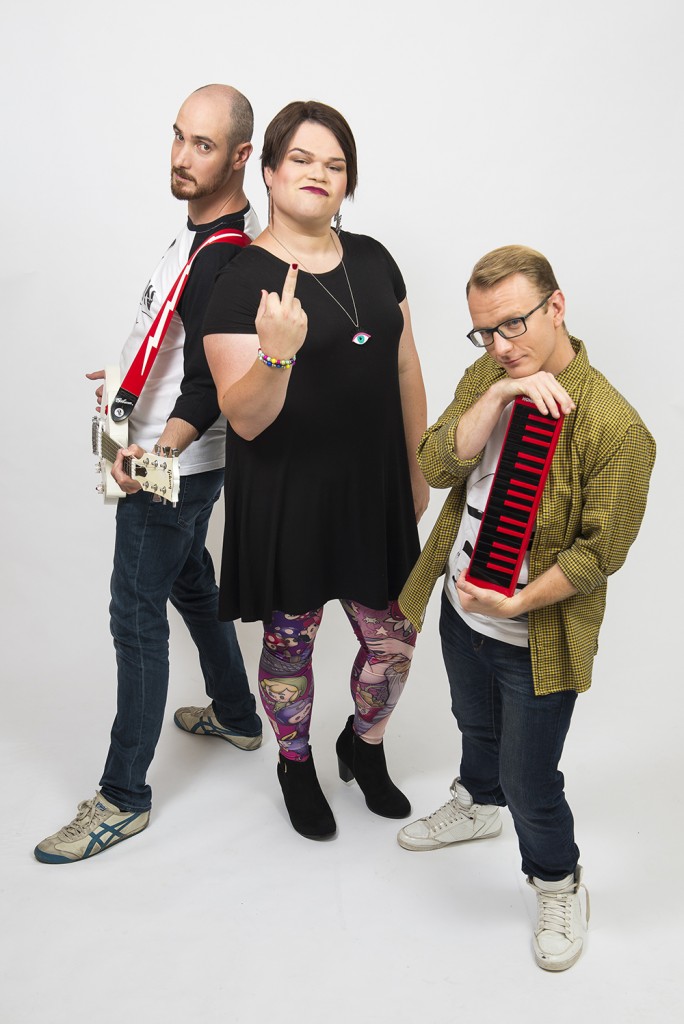 I recall blowing out four candles on my birthday cake and wishing that I’d wake up the next day as a girl. I can remember making that same wish with five candles, with six, with 16 and even with 32.

There’s a lot that held me back from transition earlier in life – shame, guilt, expectation, denial – but one of the most significant factors was the thought that it would ruin my life and career.

I was fortunate enough to springboard from being a university comedian to having a career in television. I was 24 when an Australian TV network picked up a student revue that I was involved in and it became a TV sketch comedy show, The Ronnie Johns Half Hour.

I’d just finished school and I had my own TV show, but I remember feeling disappointed when, during the early stages of production, the head writer announced that there would be no cross-dressing in the show, because we were not Little Britain.

I remember feeling jealous of my female cast mates for their costumes, the attention they got in the makeup chair and the sisterly rapport they had with one another. These feelings, of course, weren’t new to me – I’d experienced this sense of unease and envy since childhood. I felt jealous of half the world’s population, although I never had a word for it. I’ve since learned that feeling was gender dysphoria.

When the TV series finished, I found myself in a career slump. I didn’t have any other opportunities in TV, and I didn’t yet have the chops to build a real career as a stand-up comedian. This was the first time I seriously considered transition. I recall saying to myself, “I’ll give it a year. If I don’t have any new opportunities in entertainment, I’ll get a real job and maybe then I could do it.”

I knew of no-one in entertainment who was transgender (This isn’t entirely true. I knew of one trans person in entertainment, Wendy Carlos, composer of the Tron and A Clockwork Orange soundtracks). The only mainstream trans representation that I can remember was on shows like Jerry Springer.

Transition and maintaining my career seemed incompatible – unless I wanted to have a wig ripped off by an angry lover, to the chanting of “Steve! Steve! Steve!” – so I continued to hide my dysphoria. Within the next year, The Axis of Awesome, a musical side-project I’d been working on, began to gain some traction.

Within two years we played our first international shows. Within three, a recording of one of our songs went viral after it was tweeted by Ashton Kutcher. A week later, it had 5 million hits on YouTube, and a few months after that it became the highest rated video on YouTube ever. We were invited to perform all over the world and my career as an international musical comedian was established.

The more my career took off, the more deeply I tried to hide my dysphoria, and the more I tried to convince myself that the prospect of transition was impossible. The feeling never went away. I cross-dressed in secret and devoured scores of trans-related articles and websites.

The effect of my repressed dysphoria would find its way out in some of my work, too – I wrote comedy routines about deleting internet browsing histories, and filmed a shot-for-shot remake of me performing Sailor Moon’s transformation sequence. There’s even a song about peacocks on one of our albums, which, in hindsight, was a cry for help, as well as an excuse to wear a leotard on stage.

It all came crashing down in September 2014. We were in the middle of a European tour and had been on the road for months. There were hours spent alone in the back of the tour van, travelling from town to town with nothing to do but think. eventually, amid all that thinking, my gender issues came to the front of my mind. I realised the feelings I had tried to ignore were never going to go away.

I came to the conclusion that I was miserable living as a man, and that I’d grown progressively more unhappy and emotionally repressed throughout the course of my life.

One night, alone in a hotel room in a seaside town in the north of Wales, I realised that, eventually, my dysphoria might get the better of me – I couldn’t hide it forever. I wasn’t suicidal, but in that moment, I saw a future where I might be. It scared the shit out of me and I asked myself this question: trans or die?

I’ve heard people say trans is about choosing between being male or female. for me, it was a choice between personal acceptance or oblivion. Trans, or die.

But if I chose trans, how the hell was I going to do it? I was across the physical aspect: years of consuming anything I could read meant that I understood the mechanics of transition physically, legally and socially.  But how would I do it and continue with my career? How could I transition with everybody watching?

If I’d had a normal job, there’d be a policy for this kind of thing. HR would get involved, I’d take some time off, they’d have a big meeting while I was away, send out a memo and get an expert in to talk to everyone. Then I’d return to work, and, if anyone gave me shit, HR would mediate.

What the fuck was I supposed to do? There’s no HR when your job is to put videos on the internet and sing songs in front of large crowds of drunk people.

It didn’t matter, though. I had to transition and that might come at the cost of my career. When I got back from tour, I began the process. I came out to some family and close friends, spoke with my doctor, was referred to a psychiatrist and diagnosed with gender dysphoria, and was then referred to an endocrinologist to begin hormone treatment.

After my first appointment with the endocrinologist, clutching my prescription for oestrogen pills, I struck up a conversation with the receptionist. She asked me what I did for a living and I told her I was in a comedy band, that we had a very popular YouTube channel and we’d recently hit one-quarter of a million subscribers.

“Oh, that’s so great,” she said. “We get so many teenagers coming through transitioning, and it will be so good for them to have someone to look up to. There isn’t anyone. What’s your band called?”

Before I could answer, another voice spoke from across the room spoke. “They’re called The Axis of Awesome. They’re really good.” I turned to see the beaming face of a young transgender man. I winked to him and his smile broadened.

After that encounter, I realised that in addition to transitioning, it was also important for me to keep doing what I was doing and when the time came, I would come out publicly. I spoke with a comedy manager who had successfully helped one of their clients publicly come out as gay. He was very quick to inform me that helping a young gay boy come out was a very different situation to the one I found myself in. However, he did give me some advice I held on to.

“Come out doing what you do,” he said. “Don’t feel like you need to go on TV and cry on somebody’s shoulder, or bare the intimacies of your life or your body. You make funny videos on the internet and sing songs. Do that!”

So, I did. The YouTube channel went quiet for the better part of a year while I let the hormones work their magic. We gigged infrequently and when we did perform, I wore a very tight sports bra and a loose-fitting top.

The boys and I took the time to record a new album, write some new songs and rework the character dynamic of the live show to incorporate my transition. And I set about making an honest, yet funny, coming-out video for the internet.

We planned to release a new album and announce a national tour in the wake of the video, too, so the focus was drawn away from the topic of my body and towards our work.

The video had to be perfect. I didn’t want to risk people not taking me seriously. I certainly didn’t want to become a meme. I worked and reworked that script. I filmed three different versions and went through numerous edits.

Then, on 16 Feb 2016, I posted a video on YouTube and said the words I’d always wished I would be able to say, in my finest Hagrid impersonation: “I’m a woman, Harry.”

The response to the video was crazy. It was all over the national and international media and I was flooded with requests for radio and television interviews, and messages of support from fans.

I said no to a lot of the interviews. I didn’t feel like I was ready for them. I’d only lived as a woman for a few months at that point, and I’d only been out in the public eye for a matter of days. There’s a part of me that doesn’t want to do that stuff, a part of me that wants to get back to being a comedy musician.

That part says that me being visible and successful is significant enough, and there are other people who can be spokespeople and role models. I’m just a singing clown.

But then I think of what the receptionist said to me when I first visited the endocrinologist, and she was right. There are so few trans voices with the opportunity to speak, or the opportunity to access the platforms I have access to.

I also then recognise that I’ve lived so much of my life presenting as a cisgender white heterosexual man, and I question whether I’d have the career I have today if I’d revealed that I was trans earlier, or if I’d been born a cisgender female.

And I’m coming to the conclusion now that complacency and comfort are reserved for the privileged. It’s not enough for me to just get back to work as a comedian and hope that my visibility is enough.

I need, at the present moment, to be respectful to the experience of the voices that are already speaking, to take the time to have a lived experience and to learn and become comfortable before declaring myself an authority.

But, when the time comes, I feel I have a responsibility to help other women and other queer people. Because I want to live in a world where fewer young people are blowing out birthday candles, desperately wishing for something that is entirely possible.

Jordan Raskopoulos is a transgender comedian, actor and singer. She is best known as the frontwoman of internationally acclaimed musical comedy group The Axis of Awesome, but is also very good at fighting evil by moonlight and winning love by daylight.