An ode to ‘Baby, You Are My Religion’ by Marie Cartier

Baby, You Are My Religion: Women, Gay Bars and Theology Before Stonewall (2013) by Marie Cartier explores the crucial community spaces built by lesbians in America in the mid 20th Century.

The title was lifted from one of the author’s ex-lovers: “In 1995, I was dating a butch woman who at one point said to me, ‘Baby, you are my religion,’ in response to my wanting her to go to Catholic Mass at Easter.”

The book is well researched and makes many pertinent points about the close-knit communities of the lesbian bars in the USA in the ’50s and ’60s in particular, and how they really did save lives.

Marie interviewed a broad enough cross-section of lesbians to give readers a clear picture of how these bars operated, and just how crucially important they were to the many lesbians who literally had nowhere else to go to be themselves.

Joan Nestle, one of over 100 people who were interviewed, now lives in Melbourne and has already written about lesbian bar The Sea Colony in New York (in A Restricted Country). Nestle is obviously an inspiration for Marie’s research into an era Marie herself was too young to be part of.

One of the most intriguing and surprising stories depicts Lillian Faderman, another Jewish working-class lesbian writer who went from someone who visited the bars for sex, to graduating from and then teaching Lesbian Literature at UCLA.

Others who were interviewed included Judy Grahn, who moved from the gay bars to feminism and wrote Edward the Dyke, and Other Poems (The Women’s Press Collective, 1971); Deborah Edel, co-founder with Joan of the Lesbian Herstory Archives in NYC; Jeanne Cordova, a self-identified butch who wrote When We Were Outlaws (Spinsters Ink 2011), and the comedian Ivy Bottini. 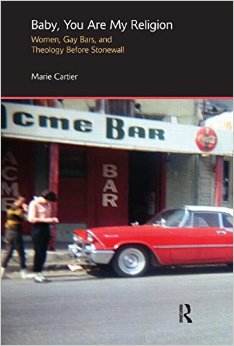 Baby, You Are My Religion: Women, Gay Bars and Theology Before Stonewall

When Marie started writing about the 1970s and 1980s, I felt on more familiar territory. As a lesbian feminist, I had assumed that the bar-dykes had been superseded until their undeniable presence at the Kingston Hotel in Richmond, Melbourne, in the 1980s proved otherwise.

Badges from the 1970s, WITCH – Woman in Total Control of Herself, or, better still, Women’s International Terrorist Conspiracy from Hell, reflected the hardcore feminist ideology of the time.

Here in Australia, we didn’t have the so-called ‘sex wars’, or not to the same fanatical extent anyway, where lesbians in the US either agreed with those trying to rid the feminist movement of butch femme, leather-wearing, s/m lesbians and sex workers, and those who were anti-censorship and agreed that all lesbians, no matter how they acted out their lesbianism, were acceptable.

By the late 1980s, lesbian feminism was on the wane in the US and opened the way for the rise of Queer Nation in the 1990s.

Despite Marie’s clear intentions as a Catholic to place the lesbian bars in a religious context, it wasn’t until the last third of the book that I lost interest in what she had to say. It’s all a matter of belief, really: she does and I don’t.

That being said, I did enjoy reading about the Women of Forty Plus Group in Long Beach, the lesbian and gay retirement apartments in LA called Triangle Square, and the politically-oriented over-60s group Old Lesbians Organising for Change. On one or other of my visits to the US, we’d attended meetings and gatherings or had contact with these organisations.

Carolyn Gage wrote a review of Baby, You Are My Religion which was included in Sinister Wisdom: Southern Lesbian Feminist Herstory: “As a lesbian who came out in the era of lesbian-feminism, I found Cartier’s ideas did provide me with a missing link.”

I found Marie’s book to be both an important contribution to lesbian culture and a significant herstorical document.

“To all of the gay women who came before me, cleared the path for me, and walked the path with me…butch, femme, kiki, androgynous, lesbian and transgender… who dared to walk into a gay women’s bar and acknowledge themselves and their community and made a community for me to walk into.” – Marie Cartier

Order Baby You Are My Religion here.

Jean Taylor is a radical lesbian feminist who is a writer and activist based on Wurundjeri country in Melbourne. Her latest book is Lesbians Ignite! In Victoria In the 1990s. More of Jean’s work can be found at www.dykebooks.com