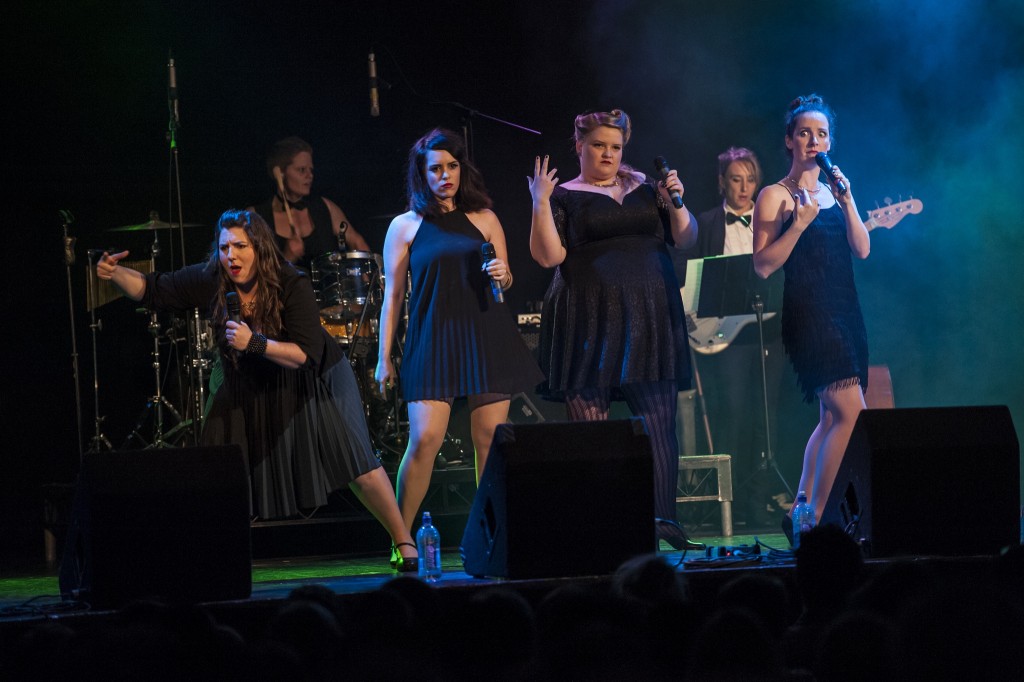 Lady Sings It Better is a comedic cabaret made up of four women who perform misogynistic songs by the likes of Robin Thicke, Usher, and Nine Inch Nails. This tongue-in-cheek cabaret quartet is bringing their show to the Melbourne Comedy Festival, and Charlotte Long caught up with one of their members, Maeve Marsden, for a chat.

A: Apart from highlighting the misogynistic lyrics that are often contained in pop songs, what else were you hoping to achieve with Lady Sings It Better (LSIB)?

MM: First and foremost we aim to be funny and sing well. I know that’s really basic but it doesn’t matter how great your Important Feminist Message is, the most important thing we do is entertain the audience. We’re also proud to have a show that presents a range of bodies and sexualities, and a show that’s sexual in a weird, fun, aggressive way. It’s not the usual way women get to perform sexuality – grotesque and aggressive and abject. It’s bloody fun to do, though!

A: How important do you think humour is in LSIB, and in tackling issues surrounding gender and sexuality in the wider community?

MM: Humour is integral to our show, and is really important to the wider fight for equality. Firstly, humour can access those ‘hard to reach places’, by which it can be an important tool for bringing people onside in a welcoming and playful way. I love watching blokey straight dudes warm up to us over the course of the hour-long show. Humour is also a great release for those engaged in direct activism. Unfortunately, a lot of mainstream comedy can be sexist or homophobic, so one can be wary of heading out to a mixed comedy line up. With a show that is directly political like ours, at least you know you can relax without the risk of an offensive joke (at least I hope so…do tell us afterwards if we’re accidentally offensive…).

A: What kind of impact do you hope LSIB will have on audience members in terms of gender and sexuality?

MM: I’ve had women tell me it spoke to them to have a fat queer performer like myself being unapologetically sexual and physical on stage, and that was really lovely to hear. I hope people listen more closely to lyrics and engage in analysis about what messages we’re sending in pop culture.

A: When you perform you don’t change the lyrics if it’s a man singing to a woman. Why do you think it’s important not to change the gender pronouns?

MM: I often tell the story of being 15 and taking singing lessons and having a teacher tell me not to sing love songs written by men with the original pronouns. She said she wasn’t homophobic but that audiences just expected heterosexuality from performers. This is so harmful, this idea that heterosexual love is more normal, legitimate or romantic, more worthy of love songs. As a queer woman singing the songs we do about women it adds another edge to our work because I am getting to sing about loving and fucking women. It’s also important for the feminist message in the show that the audience hear the ways men talk about and to women in songs and consider how that makes them feel.

A: What kind of influence do you think lyrics seen in songs such as Blurred Lines by Robin Thicke can have in terms of gender and sexuality?

MM: When women are consistently positioned as submissive in pop culture and men get away with writing downright rapey lyrics without debate, we perpetuate a sexist society. I’m glad that now, when songs like this come out, people are discussing what the lyrics mean and parodying them and messing around with expectations.

A: You recently did a cover of Nine-Inch-Nail’s Closer in conjunction with AIDS Council of NSW (ACON). What was your aim behind this?

MM: We did! It was so much fun to make.  I fisted a watermelon. Our video was made to promote the safe sex resources on iloveclaude.com. I Love Claude was created by ACON to provide information and resources on kink and women who play with women. We focused on the use of gloves in safe sex, and we reinvented the ‘condom on the banana’ demonstration from high school while getting down and dirty with a bunch of fruit. It’s definitely not a ‘how to video’ for safe sex or fisting! It’s a creative interpretation of a safe sex message that allowed us to make a video about women’s sexuality in a really fun way. We had a feminist, queer crew all volunteering their time and we’re really proud of the result.

A: Where are you hoping to take LSIB in the future?

MM: We did a little recording last year with money raised from our monthly donors on patreon which I’d love to do more of. We want to keep performing and making new shows, and it’d be great to tour overseas again. I think focusing on the longterm future as a performer can make you lose sight of the smaller goals and achievements of the present. Right now, I want us to have successful runs for the Comedy Festivals, for the future we’ll see!

Lady Sings It Better: Here To Save The World opens at The Butterfly Club in Melbourne on Tuesday, April 12. A wheelchair accessible show is at Hares and Hyenas on Monday, April 11. The show opens in Sydney later this month.

Charlotte Long is a university student and aspiring writer. She loves all things pop culture and is currently grappling with her place in the world.