Strolling up and down Oxford Street, you don’t have to think too hard about who advertisers are trying to target. On one corner, two perfectly coiffed, blonde-haired, blue-eyed boys soap each other down on a poster for a foam party. Across the street, a flyer depicts a sea of half-naked, white, muscled men packed onto a sweaty dance floor to promote a visiting DJ.

These homogenous images that crop up repeatedly in Sydney’s gay mecca can exclude minority groups, and run the risk of perpetuating bigoted attitudes.

ACON, an LGBTI health organisation based in Sydney, recently unveiled a series of billboards, posters and videos as part of their revamped Test Often campaign, which is a welcome step forward in including marginalised groups.

The campaign features a diverse group of MSMs (men who have sex with men), which includes a transgender man, and an Indigenous man.

Through personal anecdotes on YouTube, these men analyse their HIV testing habits in a bid to reduce stigma and encourage other MSM to test often.

One such man is Ruben, a 20-year-old trans MSM who talks candidly about his initial apprehension about being tested, for fear of experiencing discrimination from people who may not be trans aware. 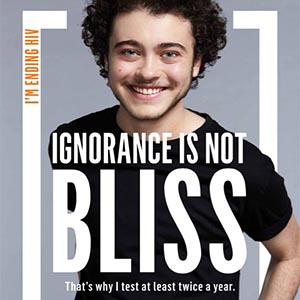 Aram Hosie is the chair of PASH (Peer Advocacy network for the Sexual Health of trans masculinities) and welcomes ACON’s inclusion of Ruben, noting that trans visibility is paramount in MSM health campaigns.

“We acknowledge this incredible first step and look forward to further iterations of this and other campaigns making it easier and clearer for trans men who have sex with men to see themselves,” Hosie says.

“The broad definition of ‘men who have sex with men’ does and should always include trans MSM.”

As Hosie suggests, hopefully ACON’s campaign images, which are currently plastered across billboards, print media and the internet, will encourage the wider queer community to embrace minorities and assist in giving them a stronger voice.