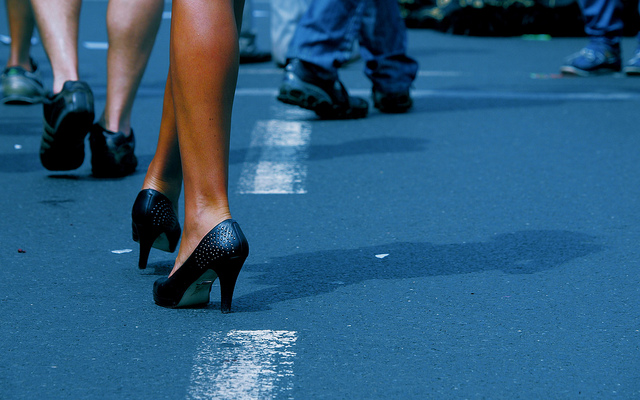 “You’re a fucking disgrace!” shouted a drunken youth, hanging out of a low-slung, headlights blazing, Falcon GT as I walked out of the Directors Hotel in Adelaide after my first ‘Transgender Friday’ meeting. I waved and smiled, but I don’t think it helped my position on his disgracefulness ladder.

Until then I hadn’t appreciated how deeply some people feel that I, a male dressed as a female, am a disgrace. I thought it was simply my private disgrace – a disgrace to my expected gender roles in society, a disgrace to my wife and children, not to mention the contempt for myself that I have struggled with for 50 years. But by transgressing gender boundaries I seem to touch a raw nerve among the youth.

We tend to pigeonhole people into categories of all sorts, including sexuality and gender. We are either male or female, and we are attracted to one sex, or the other. But what to make of someone who is obviously male, dressing as a female? More difficult still, what to make of the sexuality of the partner of that indeterminate person? Our categorising facility breaks down.

People are annoyed when they can’t put me into a neat pigeonhole, and they question the possibility that my wife, my heterosexual and loving wife, is perhaps a lesbian, as if being a lesbian is somehow a crime. And me – what happens to my sexuality when I dress female? Surely by looking female I must want to attract men?

The law is no great help. If I decide to transition, that is, to officially take on the role of a woman, then I must dissolve my perfectly good marriage. How crazy is that?

Going out in public for the first time dressed as the woman I want to be was more than just a little play with clothes, a wig and makeup. It was the start of me accepting who I am, and addressing all those confusing issues for myself, my wife, and everyone else in the world.

Where lies the disgrace? Is it in the clothes I wear? The way I feel like I’m drowning if I can’t dress and be female? Does it lurk behind the reason I feel this way, whether it is genetic, a small imbalance of hormones in the womb, or something happening inside my mind? Perhaps it is the fact that I don’t look pretty enough to be acceptable to the god of feminine identities, or the male gate-keeper of what is acceptably female?

So, who is the “fucking disgrace” here? Me, minding my own business, trying to live life in the most valid way I can, being incapable of living it in any other way? Or the youth hanging out the car window, and a society that sits on his shoulder and whispers that it’s OK to shout abuse at someone who is different?

Stephanie Russell is an advocate for transgender rights and Secretary of the Carrousel Club of South Australia. She is a scientist with diverse research interests ranging from astronomy and satellite engineering to building the resilience of Indigenous communities to climate change. But at heart she is a writer.