Archer on tour: Queer and media in the UK + a tribute to Kat Muscat 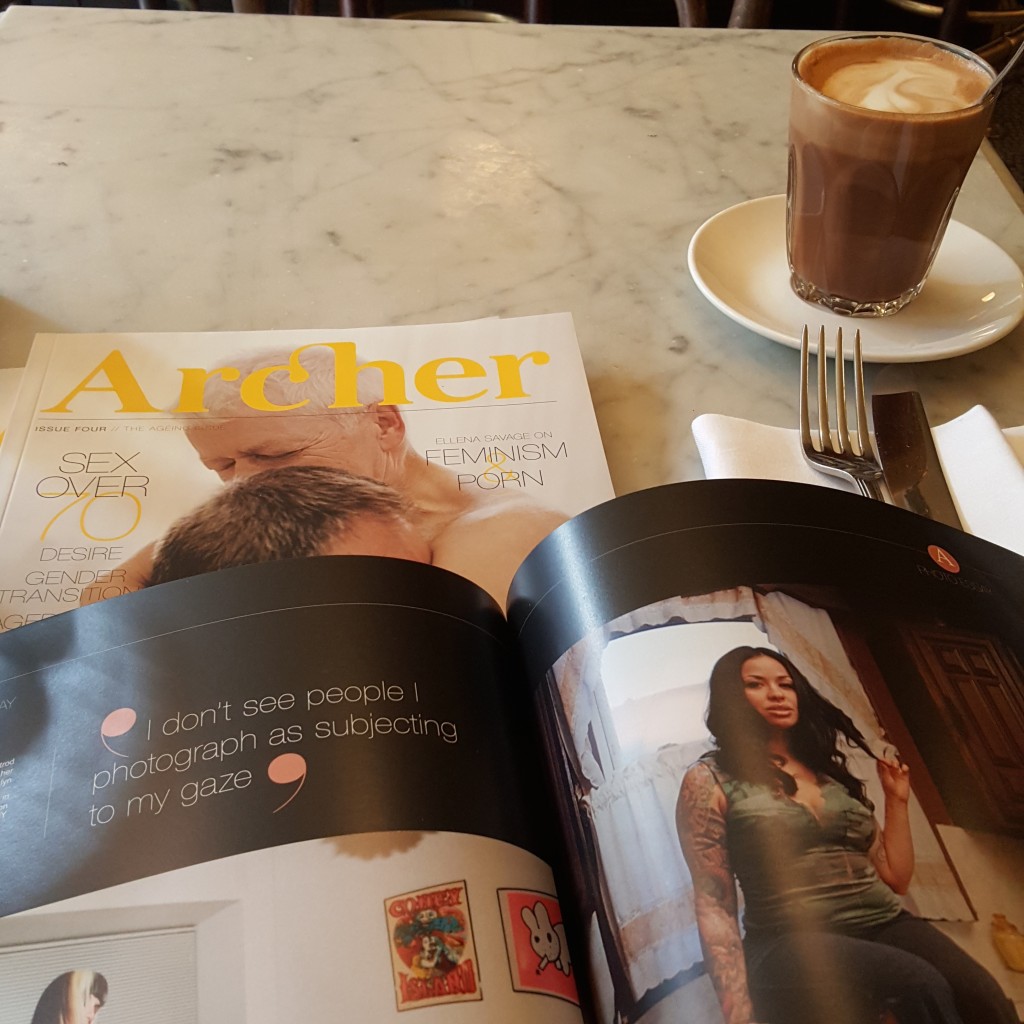 Amy Middleton is the founding editor of Archer Magazine.

One of the beautiful things about Archer Magazine is how many diverse groups and individuals it brings together through its content. I’m not only talking about the different identities and communities that make up our readership, but also the gap this publication bridges between identity politics and commercial media.

A summary of the people I met in during a tour of London this month, as part of Melbourne’s UNESCO City of Literature Office Travel Fund initiative, really exemplified this.

First up, Jeremy Leslie, author of The Modern Magazine: Visual Journalism in the Digital Era (a book that sits proudly on my shelf at home in Melbourne) and founder of MagCulture, a spiffing blog about magazines, design and publishing, and Steven Watson, founder of Stack Magazines, a subscription-based aggregator of magazine titles for people who are curious to discover new publications.

These guys work together to put on PrintOut, a regular publishing event held in trendy Shoreditch. They’re very clued into publishing, print and the ‘it’ mags of the moment. We talked about niche mags and commercial mags. We talked about design and content and distribution of mags. In essence, we talked about mags. On the other side of London, in Soho, I met with influential folk from London’s queer media and literary scenes. I had lunch at the famous Groucho Club with Linda Riley, who I once heard described as the Rupert Murdoch of queer press. Linda founded Square Peg Media, and has developed several LGBTI publications for UK audiences.

I also had coffee with Simon Collinson, online editor and UK correspondent at The Lifted Brow, a literary mag with whom we share office space back in Melbourne. We talked about the trials and tribulations of breaking down international barriers from an Australian literary context.
Publishing, queer community, literature: Archer Magazine encompasses all these things. At our launch parties, we see a beautiful combination of LGBTI activists, sex-positive advocates, writers and readers. We want to reproduce these events in the UK and Europe to spread the Archer word of inclusivity, sensitivity and progress. The connections I made last week will help us get that done.

People have asked me throughout this trip whether Archer Magazine needs specific editions for its overseas audiences. The team gave this some thought, but we decided that stories of sex, sexuality and gender are universal enough to warrant a global audience. The attitudes and experiences of people on the other side of the world are key to understanding our own complex identities. Sex is weird for all of us, as we always say, so let’s talk about it together.

I’ve come across some beautiful publications in my travels including LOVE, The Gourmand, It’s Nice That, and Reprobait. Still, Archer remains the world’s most inclusive sex publication… though I’m still searching for a worthy rival for that title.
On a very sombre note, in London I was devastated to receive news of the passing of a dear friend, and an incredible writer, campaigner and feminist, Kat Muscat. Kat was an enormous advocate for Archer Magazine and all it stands for. She provided me with support, feedback, advice and writing for Archer Magazine, as well as a deep emotional connection, friendship, empathy and love.

Just before her death, Kat told me she wanted to work for Archer in an extended capacity. I offered her a job co-editing articles with me for Archer’s print edition. We would have started working together this month. The outpouring of grief from the Melbourne writing community has been enormous. It’s all too massive to comprehend the loss of a mate. It’s also devastating to lose someone so important to so many circles and communities.

Kat’s politics on identity, diversity, LGBTI rights and feminism were among the most profound, thorough and progressive of anyone I have known. She was a gentle, compassionate educator, with a calm, zero-tolerance approach to society’s flaws. She also touched an incredible number of people, and social media has been alight this week with love, sadness, photographs and epitaphs in Kat’s honour.

Now and into the future, Archer Magazine remains a platform to promote the values Kat held so strong. Over the coming months, we will publish a series of her writings to continue her work towards equality, safety and a better world.

Kat, you are deeply loved, desperately missed, and fiercely admired. From the northern hemisphere, we toast to you.

Read more stories about: archer magazine, how to make a magazine, media