Remembrance of poppers past 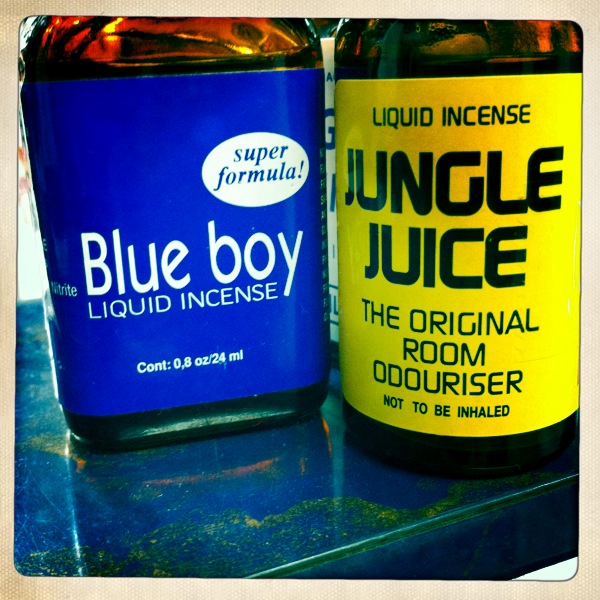 “We don’t sell that here,” the burly bearded man behind the counter of the sex shop said. “I think you’re after ‘wood varnish’.”

This was pre-COVID-19, before I was forced to buy ‘poppers’ online during Melbourne’s lengthy lockdowns.

At first, I looked at him dumbfounded, not getting the gist of what he was implying. “So, you don’t sell poppers?”

“Like I said, we don’t sell that here,” he repeated, pointing down at the glass cabinet under the counter.

I looked in the glass cabinet and saw what he was referring to: the little grey and blue bottles branded with the name ‘Jungle Juice’ in large letters and its codename, ‘leather cleaner’, in a smaller font underneath it.

‘Leather cleaner’, ‘wood varnish’ and ‘poppers’ are some of the monikers for what people still mistakenly call amyl nitrate. That’s another substance.

Amyl nitrite was the key ingredient in the 1980s until it changed in Australia to isobutyl nitrite, which it’s been since then.

People still refer to it as amyl or, colloquially, as poppers. It’s a compound that belongs to a family of volatile liquids named alkyl nitrites. It differs from country to country and even from manufacturer to manufacturer.

This is why the Therapeutic Goods Administration (TGA) attempted to regulate it, between 2018 and 2019.

Their aim was to have a safe product readily available at local pharmacies rather than a bunch of alkyl nitrites that weren’t registered and could potentially be harmful to consumers.

The TGA is supposed to be preparing for amyl to be on pharmacy shelves now, in 2021.

From what I’ve discovered by talking to someone who is in-the-know, this could still be a long way off.

Julio* is the co-founder of a small poppers business, Double Scorpio, in the USA, along with his boyfriend.

He talks to me via Zoom from his Texan house and gives me the lowdown on how he founded Double Scorpio.

“I was in New Orleans,” he says. “Someone at a bar…put a bottle of amyl to my nose…it splashed a little bit on my nose and it burned me…I came back with a scab…and my boyfriend was like, ‘what the fuck happened?’ He was just perplexed that someone could sell something that is so caustic. He had access to a laboratory…he was getting his PhD in neuroscience. We started experimenting [with] making it on our own and making it safer.”

Double Scorpio began by making poppers in small batches. “I just advertised on my own Facebook,” he says. “I’ve always been really good at social media.”

He and his boyfriend created the first artisanal brand of amyl in the United States. “There hasn’t been brand innovation since the 80s,” he says. “Many of the ‘cleaner companies’ went broke post-HIV/AIDS,” he adds, which strikes me as similar to what’s happening to small businesses now during the COVID crisis.

In March 2020, he had a meeting with the TGA and was going to make his product TGA-compliant, but that’s “now on the backburner,” he says. “I’ve had this feeling to get this done immediately or someone’s going to beat me to the punch. It’ll happen when it happens.”

He finds it odd that the TGA does not want amyl to be sold at Australian sex shops. “I think it’s very off-putting for a pharmacy or chemist in Sydney to sell this clandestine product amongst shampoo and scrunchies. If I was a policy-maker, I would have sex store owners apply for a licence and educate people about harm reduction with amyl.”

He’s been looking at Chinese and Indian pharmaceutical companies that could possibly make the poppers that would be TGA-approved. It would be cheaper than making them in Australia.

He reflects on the future of Double Scorpio. “There’s a lot of uncertainty in this market,” he says. “It’s been very interesting starting this company; selling a clandestine product. At first I wanted to draw all this attention to me and this company. Now I just want be like, okay, I got the notoriety, just calm down,” he laughs.

He wonders what would happen in the United States if the FDA (Food Drug Administration) made poppers illegal there. “Would we [Double Scorpio] be illegal?” he asks.

While I could have returned to the sex shop I visited in 2019 (I didn’t want to because I felt uncomfortable purchasing it in-person again) to see if they still stocked poppers, I ordered some from another store that was selling them both over the phone and online.

The poppers arrived in a little brown paper bag and were bubble-wrapped and bound with brown masking tape.

I look forward to the day when I can walk into my local pharmacy to buy poppers legally.

Views expressed in Archer Magazine are not necessarily those held by the publication. Neither are such views necessarily those of our sponsorship bodies. In relation to licit and illicit drug use, Archer Magazine seeks to adopt a harm minimisation approach to support those who already use drugs to reduce risks and make safe, informed choices. Nothing in this publication should be taken as recommending drug use.

Joseph is a freelance journalist and writer based in Melbourne. He’s currently doing a graduate diploma in journalism at RMIT. In his spare time, he’s usually watching a TV series, reading a book, or listening to his eclectic Spotify playlist.