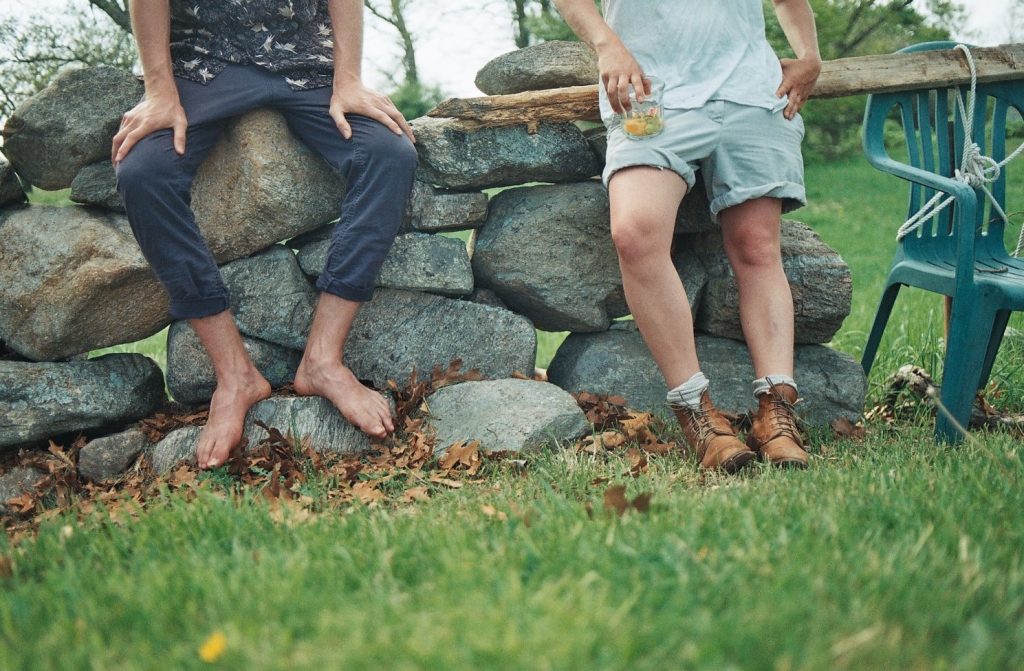 This is the first part of our new memoir series by Finnegan Shepard. “It’s All About Aly” details a time in Shepard’s life in which he lived in a tiny studio apartment in New York City with a cis man and shared a kind of merged identity with him.

Part two can be read here.

“The weather’s shit,” Aly announced, sticking his hand out the window of our 400 square foot apartment window. It was March in New York City, neither warm nor cold. Aly was dressed in harems and an open sweater vest, his skin taut and tan and thin.

“Reminds me of this Anne Michaels line,” I said from his bed as I put on my shoes, “It’s March, even the birds don’t know what to do with themselves.”

Aly’s mattress was by the door, mine by the window. A three-quarter wall gestured at a privacy we didn’t maintain, not because we had any sexual or romantic interest in one another, but because our relationship took up the space that romance normally does.

I stood and glanced at myself in the mirror. Through my white t-shirt I could make out the terrible crescents of my hips, the outline of my bra. I put on a sweater.

“Even the birds don’t know what to do with themselves,” I said.

Three hours later I was in a cab back to our place with a woman named Sura, who kept trying to stick her hands down my pants. Aly was biking to meet us there.

“Come on,” Sura slurred in my ear.

Despite all the sex I was having, I was having a difficult time trying to define sex. Was it distinguished by orgasm? By penetration? By a kind of inarticulable mutuality?

What I wanted most was to be inside a person and to feel it, but because I entered with a silicone strap on and no nerve endings, what I felt had to be imagined: sex was, literally, a story.

Aly was waiting in the lobby. We walked up the four flights of stairs together. I found the keys first, and let us in.

Sura pushed me onto Aly’s bed. Her mouth was wet and wide. I moved further up the mattress, and she began to disrobe us both aggressively, and then to chomp her way down my torso.

Aly was chugging a glass of water. We made eye contact. As we did, I felt a peculiar and somewhat painful sucking sensation, and realised that Sura had yanked my tampon out and that it was flying across the room. It ricocheted off our Janis Joplin record and landed somewhere behind the turntable. Aly’s eyebrows raised, and he set down his water glass.

I knew in that moment that there was no chance of either of us backing out—the story was already too good.

This went on for four hours, Sura moaning, Aly and I exchanging concerned glances every time he surfaced enough for our eyes to meet. Nobody came. Somewhere around three am, we all fell asleep.

In the morning, Aly nudged me awake. He was fully dressed. “I’m going to the clinic,” he said. “To get tested. Come with.”

“Hell no,” I replied. My head was throbbing. “I didn’t do anything.”

“You should. I’d be concerned if I were you.”

He stuck out his bottom lip. “Someone had to do it.”

Aly shrugged. “No idea. She was gone by the time I woke up, thank fuck.”

I laughed, and retrieved my phone from the pocket of my pants. There was a text from a friend we’d said we would meet up with the night before, and two new Tinder messages, from Francela, a girl I’d been messaging off and on for weeks, and someone I hadn’t talked to yet named Emily.

“Fuck’s sake,” Aly said, and galloped out into the hallway.

I could hear him pounding down all four flights of stairs. I imagined the large glass door that opened out onto 3rd Avenue swinging open, and then merged the faint rumble I could hear from our apartment with what was always happening on 3rd: lurking yellow taxis, people in black dancing their way around tourists trying to find Union Square, NYU students braying at their outdoor bruncheons, delivery trucks double parking against an onslaught of honks.

My skull was pounding. I stretched my arms behind my head and looked down at my torso. In this position, and especially in the morning, my breasts were flattest, the muscle in my stomach more defined. My phone vibrated. Sure thing, meet at Post in twenty?

I sent a thumbs up and swiped over to Tinder. Francela’s message informed me that she had spent the day sitting in the kitchen of her mother’s apartment in Spanish Harlem, forced into a cooking lesson. Emily had written: supppp, with a cat, slice of cake, and disco men emojis.

It was a week before I met Emily in person.

For that week, it was business as usual for Aly and me. We went grocery shopping on Sunday morning when everyone else was still asleep. We watched Made in Chelsea, and ate tofu scramble out of one big bowl.

When Francela came over on Wednesday, the three of us hung out in our apartment for a little while, and then we took her to a bar nearby, with exposed brick and free darts.

“If you were to describe what it feels like to be you in a shape, a colour, and a texture, what would you say?” I asked.

“I love this question,” Aly added.

“I don’t get it,” Francela replied, frowning at her Old Fashioned.

“Okay,” I said, “we’ll start small. Tell us something interesting about you.”

We whisked her off to buy a cupcake on St. Marks. It had fluorescent green frosting. She seemed to appreciate it, but didn’t give verbal confirmation one way or another. When she was finished, we walked her to the bus stop. I kissed her goodbye, well aware that we wouldn’t see each other again.

“Cool that she takes the bus, anyways,” Aly said as we walked back to our apartment.

That night as Aly snored, his gargantuan feet poking out the end of his floral duvet, I thought about how I would have slept with Francela if I had his body.

There was absolutely no connection between us, but Francela was attractive, and if it were possible for me to have sex in a way that was simply physiological then I would have done it.

But my options were either to have lesbian sex, or to add in a strap on and a lot of language, which rendered my core desire redundant; I wanted the logic of heterosexuality, which was antithetical to explanation.

Drunken one-night-stands—a staple of heterosexual experience—were my most pressing dream, but when it came to it, all it left me with was a story and a heightened sense of incompleteness. A fire truck screamed past our building. Aly’s flat chest rose and fell.

Part two of ‘It’s All About Aly’ can be read here.