Parenting and having a queer ‘tribe’ 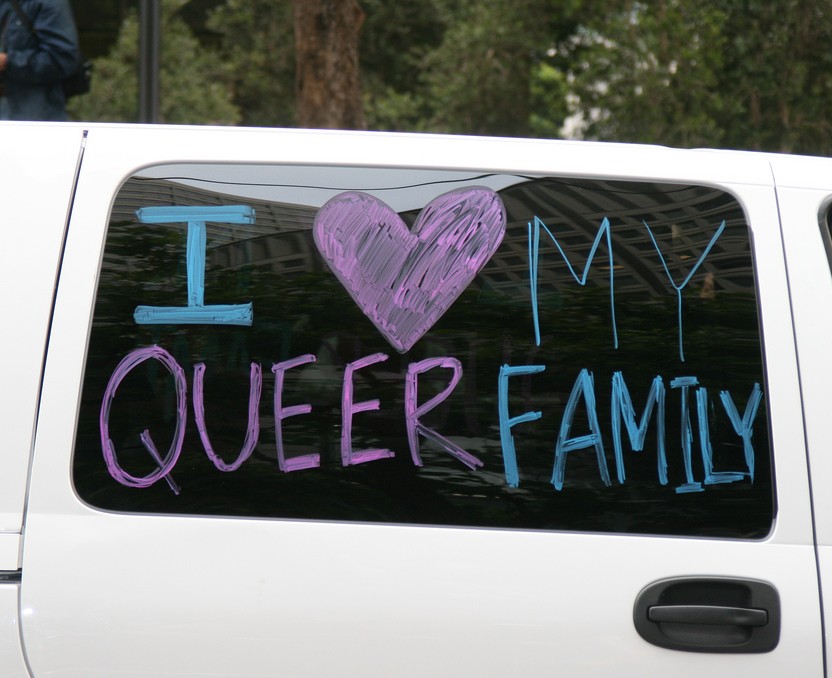 Our little person is co-parented. Four adults in two separate (but now kind of inter-dependent) relationships are actively involved to varying degrees at varying times in providing an abundance of love and care. We get to take turns on nappy duty, sleep deprivation, and having baby-free adult time.

The next layer out involves a whole number of other excellent adults, who also dish out love and care to both the little one, and to us. I have another partner, and there are also grandparents, uncles, aunties, cousins, and highly involved logical family members. It’s a proper tribe. A village.

When I describe – in varying detail – this family set up, responses vary wildly. There are the parents who envy the fact that we get to share responsibilities around and have time off – that new parenting hasn’t translated into permanent sleep deprivation. There are those who have endless questions on the logistics, “Yes but how does that actually work?” And then there are those who can’t wrap their head around it at all. There are people who see it as entirely radical and unusual, who can’t believe how often I’m away from home (I work away), who exclaim about how hard it must be, how they could never do it this way, and don’t we get jealous, and how will the little person refer to you and what’s going to happen when schools starts, and, and, and…

The thing is, at the beginning of this journey, I didn’t really know how it was going to work either. Which is probably why, despite having tried to get pregnant for years, when my partner phoned to tell me that she actually was pregnant I had a full blown panic attack. It was subsequently followed by months of proper anxiety that required weekly therapy sessions and didn’t really resolve until a month or so post-birth. It kind of made replying to all the, “Congratulations, you must be so excited,” responses from friends slightly awkward.

(Before you start wondering whether you should be putting in a call to Child Protection for a welfare check, let me assure you that after many months into parenthood – thanks to the patience and support of my partners, many thousands of dollars directed towards my therapist, and the irresistible adorableness of my child – everything is just fine. More than fine, in fact.)

What was most interesting in painstakingly dissecting my freak out in therapy was coming to the realisation that one of the central drivers of my anxiety was a feeling that turning into ‘one of those’ parent types would invalidate the queer identity that is a fundamental part of how I conceptualise myself.

I’m one of those queers who are not so interested in assimilation. I’d rather the queer community was advocating for marriage to be abolished as a legal construct rather than advocating for the right to buy into it. I wish we were still pushing and redefining sexual boundaries and gender roles, and demonstrating new and different ways to do love, sex and relationships, rather than increasingly following the scripted narrative of growing up, finding ‘The One’, and settling into domestic bliss. I’m kinky, I’m polyamorous, I value my independence and freedom, and so whilst I respect everyone’s right to live their lives as they choose, that domestic and married life is just not for me. I don’t know why it is and I don’t mean to be difficult, it’s just how I’m wired. I guess when I got excommunicated from my fundamental Christian community I threw the entire rule book out and decided that life could be whatever I made it.

And so when, a couple months into pregnancy, a casual acquaintance asked the all-too-common question that gets directed to those in long term relationships, “Are you two planning on having kids?” I suddenly realised that I couldn’t respond with my usual retort about other priorities and why does everyone assume that’s what everyone wants and blah blah blah. I felt like I was a traitor to my own, self-defined, self-imposed, value system.

No wonder I needed therapy.

But here’s the thing. It’s actually turned out just fine. It turns out that you can have kids and still be pretty queer. You can have kids and still find ways to redefine what parenting itself looks like. You can create genuinely queer families which are wonderful and healthy and rewarding whilst still not subscribing to heteronormative and gendered norms or structures.

Image by Caitlin Childs. Reproduced under the Creative Commons 2.0 license.

What I know is that the little person we’ve brought into the world is going to grow up knowing nothing else other than our family circumstances. That having parents coming and going, and living between houses and travelling around the country will just be their normal. I hope that we will model for them that they too can grow up to create a life that looks anyway they want it to and that they will grow up to be open-minded, open to possibility. I hope that being cared for by – and being genuinely engaged with – so many different adults means that my little person will grow up knowing that they are surrounded by immense love, have someone to turn to whenever they need, and that they can have an incredibly rich, diverse range of experiences and learnings. I look forward to when my little person is grown up, and can tell me what they have learned from my particular contribution to their tribe.

I look forward to, in turn, telling them what I’ve learned since they came into the world. Like the fact that life is whatever we make it. Our own labels and their descriptions can be simultaneously freeing and incredibly constricting – I nearly missed out on creating and experiencing this particular way of doing parenting and family because I was so locked in to a particular set of assumptions about what it meant to by my specific brand of queer.

With an open mind and a dash of creativity, anything is possible.

Choose your own adventure.