The Climbing QTs: identity on the rock climbing wall 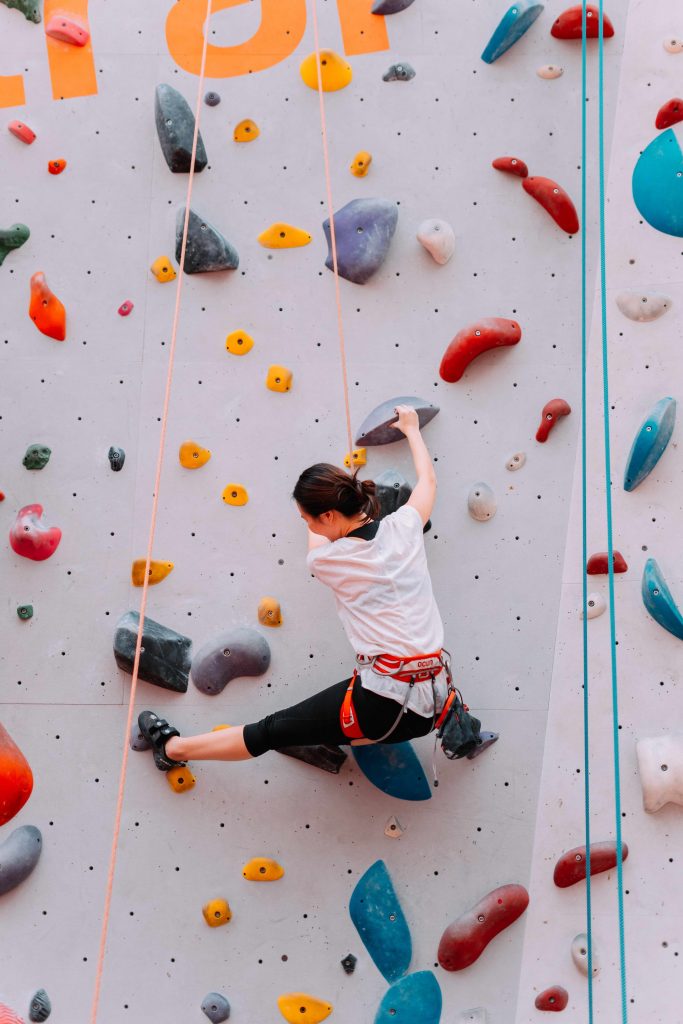 It’s early for a Sunday, still morning, but already it’s been a day of firsts. This is my first indoor climb and first time with the Climbing QTs: ‘A queer, trans and gender diverse space open to anyone interested in a safe and friendly atmosphere to climb and socialise’, co- initiated and run by Riley Edwards and Billie Rivers.

I’m in awe. I want to keep gripping holds and flexing and folding myself up walls with these climbers. For two hours I’ve been playing along, and my scrawny forearms are already throbbing.

I use my time climbing to catch up with Riley and find out why they started the Climbing QTs, to find out what exactly it is about climbing that appeals to them.

I also want to speak about their queerness and their attitudes towards sex and gender, but first I allow my surroundings, the walls and mats, the visceral mood of the gym, the physicality of skilled QT climbers and my own feelings climbing, to guide our conversation.

The gym is a roomy warehouse. The wall maps out in a curve along the floor. It builds into a plaster mould that reminds me of an inner ear, with flat slabs, oscillating slopes, and surfaces that extend overhead upside-down. I dust my fingers in chalk and run them along the wall, feeling for a new start-hold. Some are slanted and difficult to grip, with protrusions tipped in reverence to natural forms. Others bulge skywards. Riley is at the wall next to me. We’re chatting. Well … it has the rhythm of a chat, but they cut to deep places quickly and I follow with strolling replies, charmed by their soft darting questions. We’re not just chatting. We’re at the beginning and we’re already in the middle of something.

I am struck by Riley’s way of relating to me, much like the way they map the climbing wall. Balanced between polyurethane holds, they lean in to adjust their position, then press on. With crisp pauses they make space to think inside flowing sentences. Generous and rhythmical.

“Climbing changed my life,” they tell me. I wonder about where it all began – what were Riley’s reasons for choosing climbing? Or the better question – what were their reasons for continuing to return? Other than being obsessed with the physical adrenaline and the endorphins’ produced by a good session, Riley returns to climbing to interact with people in trusting and respectful ways.

Riley started out at rope gyms. You need someone to belay you, but they used to rock up solo. They felt like this loser walking around the gym, interrupting people, searching for a partner – but they were met with kindness by father-, brother- and friend-figures, helping mend their frayed expectations of what men wanted from them.

“You know those slippery when wet signs?” chuckles Riley, “They had one of those on the floor that said stand here if you’re new. I’d wait to be plucked.” These men approached Riley because they wanted to climb. “I didn’t notice this at the time, but I was using climbing as the vehicle to start to gain trust with men of all ages, types and diversities.”

Positive experiences in the gym in part led to Riley thinking about how they perceived men and sexuality. They tell me they never had good relationships with men. “It started out because I didn’t expect to be treated well by them. I was brought up to think that sex was bad, don’t talk about it, my mum told me. You need to find a man that loves you more than you love them.”

Riley remembers using this idea, this expectation – “that I should fall for anyone that wants me” – as a guideline to finding a possible partner, but this doesn’t allow for the give-and-take and the listening that Riley values, particularly in their polyamorous relationship with their long-term partner Dan.

Riley is framed by their familiarity with the padded floors and topographical surfaces. They move with care and confidence. They share their chalk, water and experience. “No one climbs the same as you, has the same body type, the same strength and flexibility.” When I’m suspended without ideas, they give me little tips that support my own problem-solving. “Try reaching for the yellow, push with your toe, twist.”

Conversations about creating the Climbing QTs began at the climbing gym, with Billie (the co-initiator of the QT group) noticing little tears in Riley’s eyes. In the wake of a tough night, “feeling trapped in the wrong person,” dreaming of being some other gender – Riley pauses, shifts out of the mode of recounting the memory to emphasise that “this happens regularly, I have dreams about it” – they knew climbing would help them work things out.

Riley remembers telling Billie: “sometimes I feel like, I wish I was a boy.”  Billie exclaimed that they were going through the same thing. They discussed being queer within the climbing community and the need for a space like the Climbing QTs.

Riley climbs in their dreams. They remain busy with the problems of rock faces and walls. They wake with their hands clenched in crescent-shapes over imagined holds. They’ve also touched the holds of so many stories. I don’t need to assemble a chronology of influences; climbing, their sexuality, gender identity, it’s all interconnected.

“Climbing is integrated into everything I do, the way I eat, the drinks I drink, the clothes I wear are outdoor clothes, the people I hang out with are climbers, now it’s integrated into my volunteer work as well, the day before and the day after is affected by when I’m going climbing.”

I look to the climbing wall smeared down the length of the gym. Completely still, and yet as a support for movement it appears to hum, to breathe with the quality of something living. I respect it. I climb it.

I reach the top hold and rest a while, in my feelings of elation, dangle each arm to shake off coils of tension. I consider my vulnerability. I’m dependent on this wall that was designed with outdoor rocks in mind. This wall is artificial and real. It holds a space for climbers to test, challenge and check in with themselves physically and emotionally.

When Riley said “… the day before and the day after is affected by when I go climbing…” they were speaking to the effect that climbing has on their health, psyche, daily well-being. This experience is fluid, no two days of climbing are ever the same – but what is clear is that climbing is integral to Riley finding a balance that works for them.

Every climb is its own journey, and the Climbing QTs offer the community a ‘non-binary, inclusive and friendly’ space for these journeys. But more importantly, they offer an experience where instead of focusing on, or prescribing, the type of climber you are, who you are, the focus is on the joy of climbing.

Megan Payne is a dancer and writer living in Naarm (Melbourne). They present work in a range of contexts, collaborate with and perform for choreographic artists. They currently study Professional Writing and Editing at RMIT.

Gender diversity at school: The school dress vs. my gender identity
By Dean Amo
Queer and Aboriginal in a regional setting: Identity and place
By Andrew Farrell
Asexuality and identity: Not hungry at a feast
By Tallis Baker
Identity, mental health and postcolonial trauma
By Hina Ahmed
Hair and identity: Developing a femme aesthetic of queer diaspora
By Jaya Keaney
Sexuality and identity: More than labels
By Hong Jiang
Coming out: Tips for parents and families of gay kids
By Kristin Russo
An ode to the Blue Mountains: In defence of rural LGBTI communities
By Gavriil Aleksandrs