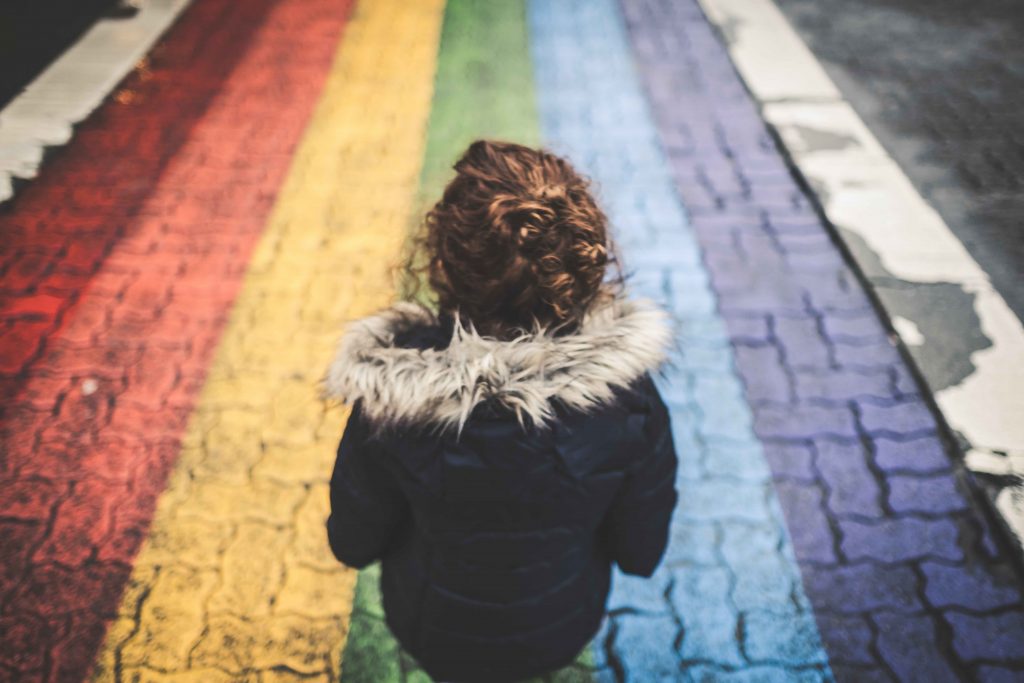 “Sisters?” asks the dishevelled guy in the sweltering hot elevator.

We’re both sweating as we look at each other, then at the ceiling. I retract my hand slightly; it was nearly touching hers.

That uncomfortable elevator ride was 12 years ago. Jeans and I had been together six years and were used to the odd personal question from strangers. At parties some guy would observe, “You don’t look like lesbians” followed by the predictable “Can I watch?”

Then when we became parents it was “So, which one of you is the real mom?”

Now kids ask our children, “What happened to your parents? Are you adopted?”

Jeans and I always knew we wanted to be parents, but we also knew it takes time for the zeitgeist to reflect any social progress written into law. We live in Canada, a place that, though far from perfect – Canada has a horrific history of racism and mistreatment of our indigenous peoples – is known for its multiculturalism and progressive social policies.

Gay marriage became legal here in 2005, but the first steps to decriminalize homosexuality go back nearly 50 years. In spite of protections under our Charter of Rights and Freedoms, we’ve always worried about how people might treat our children when they learned they had two moms. Here’s what we learned as we first ventured to mom and baby groups, daycares and preschools: whether unmarried, partnered with men or living with their girlfriends, we moms share more common ground than differences.

Bonded by sleep deprivation, debates over breast or bottle, to co-sleep or sleep train, and the high costs of raising a family, no one seemed to care our kids were parented by two women.

As our children grow older, their peers more observant, and our influence in their social interactions wanes, our worries are typical of any group that doesn’t reflect the norms of the dominant culture. Although we haven’t experienced ongoing harassment—the majority of LGBT hate crimes in Canada are perpetrated by and target young men—we can’t relax.

High school is just around the corner for one thing – in my experience, a hotbed for sexual bullying. And our mom instincts have always had us assessing the safety of new spaces until we know where our family stands, correcting assumptions as we go.

Assumptions have always been made about me because I’m bi. When I first told my one gay friend she reacted by telling me I was straight and—unlike her—didn’t know what it was like to be queer because I enjoyed straight privilege.

17 years and two kids later I recognize my privilege. My wife and I wouldn’t have the family we dreamed of if we weren’t middle class. When we first researched fertility clinics we had unionized jobs with equal spousal benefits. We qualified for the $15,000 line of credit we needed to pay for fertility treatments and later, daycare, when money was tight.

I still think about that accusation of straight privilege, wish I could have seen the future and said I may “pass” with my long hair and lipstick, but no one who is LGBT ever comes out once—and there’s nowhere to hide when you’re raising a family.

Now I come out every day. Every time I meet a new teacher, daycare worker, soccer coach, or Scouts leader. I come out when I meet parents of my kids’ friends for the first time. I come out whenever a server looks at us and doesn’t see a family—instead, hands us the menus and asks, “Separate bills, right?”

If you want to know how your kids are adapting to the dominant heteronormative culture, pay attention when they play.

When Holly was small and her Barbie got married it was always to Ken. This, I understood, demonstrated the power of media and culture to override a child’s personal experience.

But the day my son told me he wanted to marry his friend, “but boys can’t marry boys,” I was shocked. He’d never met a male couple, thought it was different for girls.

“I tell them I have two moms but they don’t believe me!” was a common complaint for Holly in kindergarten. I felt her frustration, and Finn’s, too, when he confided that a girl told him he was adopted—otherwise how could he have two moms?

“I just do!” he insisted, the note of anger clear in his voice.

If I’m feeling any emotion besides irritation when I hear this, it’s gratitude. Rather than feeling there’s something wrong with our family, Finn and his sister—now eleven and seven—think people are embarrassingly ignorant when they don’t get us. Last week I told a shopkeeper I was looking for an anniversary gift for my partner. “I hope your husband likes it!” he said as I paid.

I caught the eye contact between my kids, my daughter’s barely suppressed snicker. Their ceaseless inside joke.

Recently our family moved to a small town, population 4,900, where a number of community leaders are openly LGBT. At my kids’ new school—half the size of our previous one—a parent is transitioning. She greets us every morning at the front doors. A friendly staff member is out, too, and there’s a pride flag right on the office door.

When I first meet my daughter’s new teacher she says, “Well hello! Are you the mom with the peanut allergy or is that Holly’s other mom?”

Friends from the old neighbourhood visit and want to play The Game of Life.

Kayley wants to marry a girl and places two pink pegs in the front of her small plastic car. Finn wants to marry a boy and adds his two blue pegs in another car. I can tell by the group’s good natured joking that—unlike the time a classmate thought it was hilarious for Holly’s dolls to be “gay together”—the kids are all just having fun.

Who they marry is just one choice anyone can make in the game of life.

Nicole Breit is a poet, essayist, and creative writing instructor who lives on Canada’s gorgeous Sunshine Coast with her wife and two children. Her essay about raising a rainbow family, “Spectrum“, won the CNFC/carte blanche creative nonfiction award in 2016 – the same year Nicole won Room magazine’s CNF contest for “An Atmospheric Pressure”, selected as a Notable Essay by the editors of Best American Essays 2017.

Female friendships and sexuality: Common plums
By Laura McPhee-Browne
Queer birth stories: Diversity in families
By Catherine McIntyre
Unconventional relationships: Doesn’t every family have a Leon?
By Jessica Gittel Cornish
Transgender children: doing it for the kids
By Jo Hirst
Gender, fashion, and family: Generation gaps
By Jonno Revanche
Motherhood and sex: Navigating post-birth desire
By Carly Lorente
Coming out: Tips for parents and families of gay kids
By Kristin Russo
Parenting and having a queer ‘tribe’
By Brosh Grey