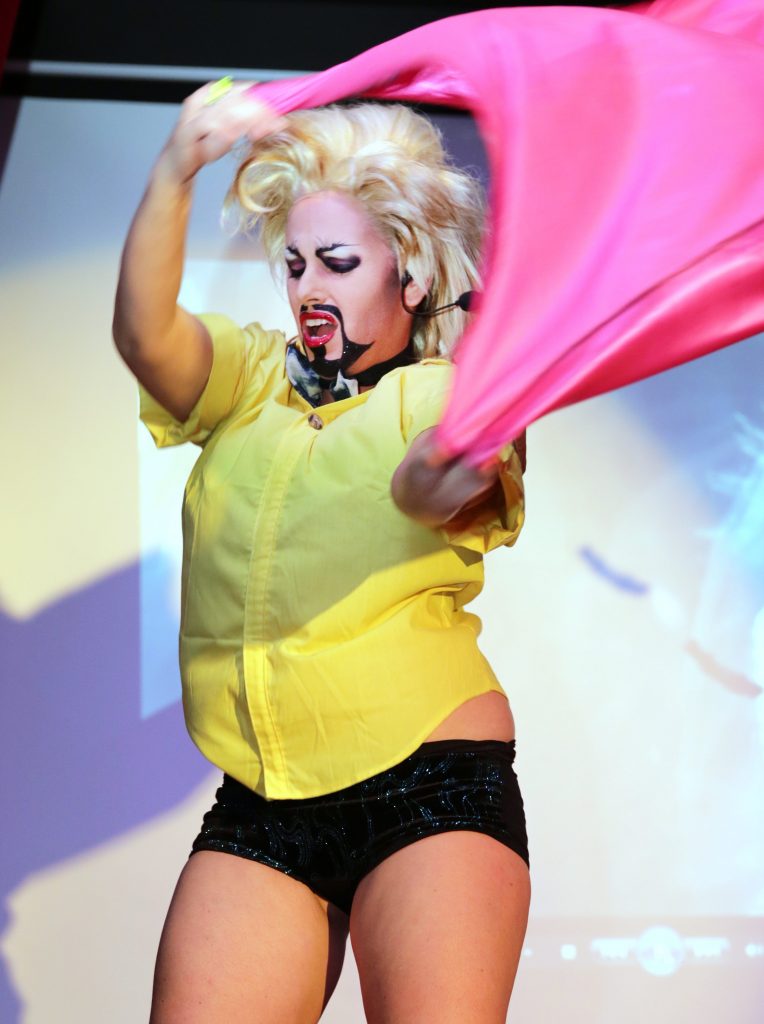 I used to live diagonally opposite the Sly Fox Hotel on Enmore Road in Newtown, in a decrepit one-bedroom apartment above the local chicken joint.

Back then, Wednesday nights in Sydney’s inner west were known as Dyke Night, during which groups of women weaved their way along the congested sidewalks, as bars and pubs hosted lesbian-targeted events for this one night of the week.

At around 10pm, scores of women would make their way to Queer Central, an event hosted by the Sly Fox, where drag kings featured as the headline act for more than a decade.

Repeated week after week, drag king events quickly became the basis of a thriving social scene, which I knew well.

Even though the last show was usually over by midnight, the drinking, dancing, catching up and hooking up went on long after the performances were over, and the onslaught of sound penetrated my little flat.

The drag king scene soon became an object of fascination for me. Not being able to sleep anyway, I decided in 2010 to start documenting these events as part of my doctoral research.

Drag kinging is a type of performance in which women and sometimes gender-diverse people consciously enact masculinity.

Drag kings perform in most urban queer centres around the world, but these events in Sydney were deeply significant for me and many others. The event wasn’t just about the drag kings on stage; it offered much more in the way of social and sexual possibility.

On a good night, interactions on the dancefloor segued into conversations outside, which sometimes culminated in an offer to spend the night, or even a relationship that would outlast the ephemerality of the moment.

Or, sometimes not: the impromptu kisses on the dancefloor and deep and meaningful conversations over beers and cigarettes could dissipate in the early morning light, leaving people to wonder if they’d see that girl again, pinning hopes on the next week.

On the promise of these good nights, masses of women would congregate in and around the venue, filling the streets with the sounds of, as described by one person, “those bloody drunken lesbians”, until night turned to early morning and taxis lined the street to take exhausted partygoers home.

Those who frequented the Sly Fox back then speak about the intensity of being there, and the pleasure of being pressed up against one another in a small, dark space, while all around, women roared their approval for the drag king on stage.

For many of us, it became difficult to imagine doing anything else on a Wednesday night. But what happens when scenes fade, as they invariably do?

The longevity of Queer Central as an event catering to same-sex-attracted women is somewhat of an anomaly in Sydney’s historic commercial infrastructure.

Most lesbian and queer events have operated on temporary arrangements, as there is little sustained financial investment in permanent social spaces for queer women.

Queer Central was first established in 2002 as Kingki Kingdom, by drag king legend Sexy Galexy, and it continued for 10 years under various management.

In 2012, the Sly Fox Hotel stopped hosting Queer Central after a series of renovations failed to renew interest. This closure occurred around the same time as a broader decline of drag king events elsewhere in Sydney.

It would be difficult to pinpoint a single reason for the scene’s demise, but a combination of factors made these events unsustainable in a changing cultural economy.

This also meant that just three years into my research, the demise of the scene cut short my process of collation and archiving, forcing me to consider the ephemerality of lesbian and queer social life instead.

As part of my research, I held focus groups a few months before Queer Central’s end, when there was already some resigned acknowledgement that the scene was decreasing in popularity.

Although it felt like the end of the world at the time, this sense of loss helped me to understand how cultural phenomena can take hold in social memory. In this respect, these focus groups captured the feelings of people in a scene that was in danger of fading from social view.

As Adrienne Rich, a notable lesbian academic, famously wrote, “The story of our lives becomes our lives.”

Stories are fundamental to how people construct and participate within scenes. In any given social moment, scenes are not experienced as a ‘scene’. Rather, scene experience is something that takes place retrospectively.

What we feel in a particular place at a particular time is a set of immediate impressions that could never be fully interpreted in the moment.

Many of my research participants enjoyed the opportunity to talk about their scene experiences with others recruited for the study.

The discussion worked similarly to the way people get together with friends the next day, to discuss the night before: conversation was filled with puzzled questions of what they had seen in a performance, gleeful accounts of who said what to whom, and coy disclosures of who they may or may not have got together with.

In telling stories about their own experiences at drag king events, people were sorting through and making sense of what they felt.

The individual reflections and stories then become a collective experience, or a scene, shared by everyone there but which took shape long after those original moments.

I discovered that the focus groups enabled participants to collectively turn social experience into shared cultural memory. The stories told took on a life of their own – they changed through the processes of questioning, agreeing and disagreeing. The living, breathing nature of stories is powerful, and can shape the contours of the scene itself.

Like so many other participants in myriad social scenes, at the point where my research participants told stories about their experiences at drag king events in Sydney, they were already engaged in a process of bringing this scene to life.

So, why does that matter, when a scene is dead?

While I waited for my daily coffee at my favourite cafe, the barista and I would often chat about my research.

Like many of the people I spoke to around that time, much of my barista’s earlier experience of Sydney’s lesbian social circuit had revolved around drag king events, and she, too, keenly felt their absence.

On one particular day, almost three years after the last drag king show at Queer Central, she told me that she had recently hosted friends visiting from overseas, and decided to give them a historic tour of Sydney’s most iconic lesbian sites. Entering the Sly Fox for the first time in years, she found a burlesque trivia night in progress.

Compared to a few years earlier, when a late Wednesday evening arrival meant pushing into a venue filled to capacity, her visit had revealed just five people inside.

She shook her head as she told me she couldn’t even finish her beer there. The trivia didn’t accord with her memory of the once-thriving venue, and she preferred to leave her drink unfinished, and her memory intact.

This exchange of stories sedimented our memory of the Sly Fox as a drag king venue. Even now, I picture it as the same unkempt site I knew, much more clearly than its present-day sleek fixtures and polished furnishings.

My focus groups also discussed the importance of the venue in understanding their scene experiences. One woman remembered the old venue well:

“I’ve been going there for so many years, from the time when it was the dancefloor in the front, to the time where they’d just re-laid the carpets.

“I remember when I was with you, Kerryn, the first night we were walking in there, and we were like: ‘What the hell has happened? This carpet is nice.’

“We were walking around making spongy effects with our feet. But, when you first walk in, you think, ‘Okay, this is the Sly Fox, it’s gonna be dirty, it’s gonna smell like stale alcohol, smell like lesbians’.”

While she was speaking, her body also told the story of her memory: her feet retraced her steps, mimicking the tactile encounter with the carpet; her nose compressed as she relived the odours; her gestures became expansive as she invoked the lesbian “smell”.

In this anecdote, the venue was literally permeated by the smells of our social and sexual encounters.

In talking about a place nostalgically, she was signalling the hold the venue has on all of us. Nostalgic expressions often work as an idealised process, ignoring the reality of poorly maintained venues and the complexities of negotiating sexual interactions in a close-knit circle.

Taking on a mythical role in our stories, the old Sly Fox will always remain central in our memories, and therefore central to how we talk about our histories.

Sscenes face backwards, despite their forward momentum into co-option by the mainstream (in the case of some underground music cultures), or into oblivion (in the case of Sydney’s drag king scene).

In fact, these movements can have the same consequences. Much like punk’s ‘God Save the Queen’ T-shirts now on sale at Kmart, they offer the opportunity to invoke a social context forever experienced as the past, but available to be relived in any given future moment.

It is because they face backwards that scenes produce a sense of the eternal. As LGBTIQ historian Jeffrey Weeks recently explained, our histories involve more than just the excavation of a buried past; they also shape and reshape memories that give meaning to our present. Our backward-facing scenes will always hold the capacity for our future-oriented feelings.

Certainly, women still congregate in various pubs, bars and other venues, that may or may not strategically court their presence. But these nights seems less atmospheric to me than the vibrancy of those drag events in the past.

Perhaps this change mirrors the widespread shifts in Sydney’s economic arrangements that push against the commercial viability of LGBTIQ spaces. Or perhaps it points to important changes to our social circles, which include trans and gender-diverse friends who may not share the same attachments to drag events.

Or perhaps it is indicative of my own lifestyle changes: as I edge closer to 40, midweek social events lose their appeal. I no longer live in that old flat, having moved to a much nicer house years ago. Either way, my direct experiences of Sydney’s drag king scene can no longer be found in those former sites.

Worryingly, there is very little material evidence that this scene ever existed. There is certainly no trace in any institutionalised archives. We need to look to our own social practices to find new ways to preserve LGBTIQ experience, before it disappears from social memory.

Sydney’s drag king scene lives on in collective memorialisation through the stories told about it. This is why talking about LGBTIQ social experiences, the very experiences deemed insignificant by outsiders, is so important.

In the wake of material consequences on LGBTIQ spaces, whether from draconian lock-out laws, the processes of gentrification, or violence enacted by homophobic bigots, the inherently social process of storytelling may work to counter the assumed ephemerality of LGBTIQ social spaces.

Scenes come to life through the stories told about them. They endure in our social memory, forming a living, breathing archive.

Kerryn Drysdale completed her thesis on Sydney’s drag king scene in 2016. Her current work is around feminism, cultural studies and queer theory, but her passion remains the preservation and celebration of otherwise ephemeral LBGTIQ social spaces.