The pinkwashing of Melbourne ‘Pride’ 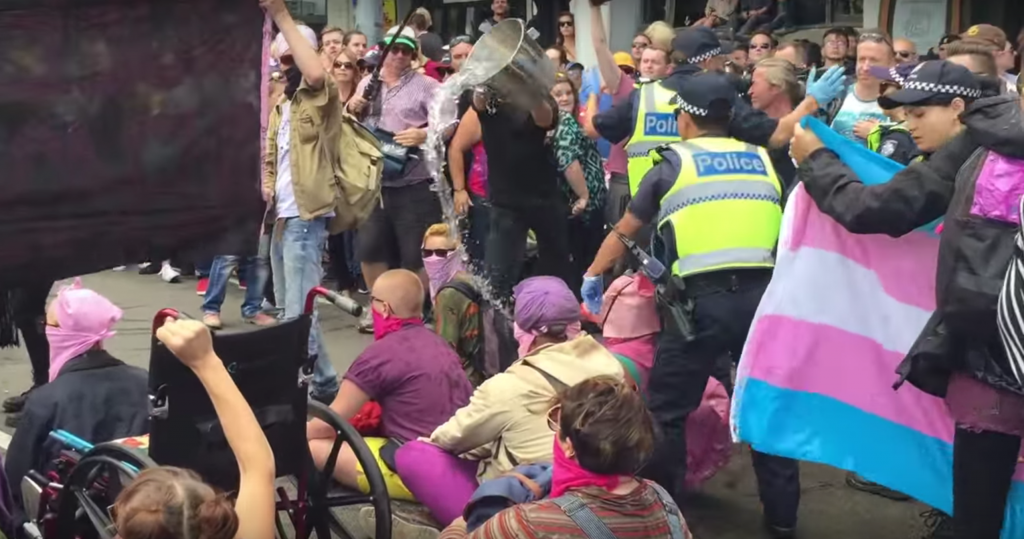 The protest at this year’s annual Pride march in Melbourne, and the violent reaction it subsequently received, draws critical attention to the ethical compromises the queer community has made to gain the power, funding and visibility we now have.

A group of queer and transgender activists disrupted the march in front of the NAB faction with a peaceful sit-in to demonstrate that ‘Pride’ is not simply a celebration, a statement from the group outlines, but a protest fighting for liberation for everyone harmed by heteronormativity, cisnormativity, misogyny, ableism, racism and other forms of oppression.

Video footage shows people from the crowd verbally vilifying the protestors for disrupting the parade and then assaulting them with fists, shoves and discoloured water from hoses and buckets. Each succeeding attack on the masked protestors, who were both able-bodied and disabled, is followed by roaring affirmation from the mob. It is horrifying to watch members of the march aggressively confront the protestors, attempt to steal their flags, litter them with insults, and then have the audacity to demand them to “show your fucking face, you cowards!”

Our queer forbearers fought for our freedom to be out and proud. But what is the Pride movement costing us if the voices and actions of those demonstrating among us are violently silenced and policed?

The protestors’ concerns were with Midsumma Festival’s continued affiliation with ethically compromised corporations who co-opt LGBT causes to valorise their own public image. This phenomenon is called pinkwashing, and there is growing backlash around the world against organisations and governments who intentionally associate themselves with queerness as a marketing campaign, without rectifying the damage they cause to other marginalised communities.

NAB is a major partner of Midsumma Festival, and AGL is a gold-supporting partner. These companies are notorious for investing in fossil fuels and, as such, the socio-environmental devastation that climate change is responsible for. Furthermore, the statement contends that Jetstar, another sponsor of the festival, is involved in forcibly deporting asylum seekers, some of whom are queer and gender diverse.

The fact that this political gesture had to be staged in the middle of the march, and received such ardent antagonism from onlookers, testifies to how few opportunities there are for criticism of the queer community to be voiced from within the queer community. Ignoring these examples of our diversity renders us vulnerable to the same dogmatic homogeneity that has historically erased our own histories and visibility.

Many of the onlookers allegedly interpreted the peaceful sit-in as a homophobic gesture, despite the protestors holding a trans flag and proclaiming a banner that read: “Queers Revolt!” If these markers of queerness, alongside the protestors’ chants of ‘no pride in pinkwashing’ and ‘no pride in deportation’, fell on deaf ears, then we need to seriously consider why. The violence they endured must only have exacerbated the existing alienation many trans and queer people feel from a gay culture that has effectively been commodified and deradicalised. There is no humour in police having to defend queer protesters from the trigger happy, violently defensive onlookers at a Pride march.

The queer and trans protestors managed to disrupt the march for approximately 17 minutes.

While the concept of pinkwashing may remain largely reserved to academic branches of the queer community, it is our collective responsibility to spread awareness of our own links to corporate funding and the vocabulary used to describe it. Would anyone bat an eyelid if your drag queens this evening were brought to you by Adani Mining?

It’s not about boycotting Midsumma. The festival does good work. It’s about listening to those from within our community when they are brave enough to stop us in our tracks and tell us something’s wrong. These protesters are not homophobic and they did not miss the deadline for joining the day’s events – they abstained from the march due to its contentious funding and sponsorship links. Herein lies the irony in Midsumma’s chairperson John Caldwell saying, after the march, that the protestors would have been welcome to join in.

In Sydney, campaigns to rebrand Telstra’s public phone booths and ANZ’s ATMs, nicknamed GAYTMS, with rainbows during Mardi Gras are further examples of Australian pinkwashing. These companies make a public spectacle of supporting the queer community, but the logic behind these efforts is simple. In fact, in a quote cited in the SMH, Melissa Tandy, chair of ANZ’s global Pride network, explicitly acknowledges that corporate support for queerness is tied into increasing productivity by freeing the time and energy that workers might otherwise be using to hide their identities in the workplace. Queer activist Nic Holas rightly challenges the authenticity of this corporate sentiment in the same article, asking, “What are the corporate policies on transgender bathroom access, for example?”

Be not fooled: these rainbow campaigns are not an altruistic and ethical investment into our struggle. Co-opting the symbols and histories of queer people, loaded as they will forever be with the blood of queer martyrs, is deeply disrespectful and exploitative no matter the ethical orientation of whoever appropriates them. But pinkwashing by corporate giants, responsible as they have historically been for the erasure of queer visibility, rubs salt into the wound. Lest we forget that none of these companies support the marginalised unless they come with a profit margin.

With the eve of marriage equality in Australia nigh upon us, liberation in one form beckons. All the same, it is vital that we encourage the diversity of queer struggles and the value of criticism from within our community, in order to continue our liberation from the multi-layered and often obliviously intra-LGBT oppression that many of us receive.

When I attend queer events, I want to believe that, somewhere in the twinky mass, there is awareness of the struggles for liberation beyond the governmental and religious institution of marriage. I want to believe that the dearth of ethnic diversity is acknowledged and questioned by others besides me. I want to believe that cis-gender white gay men are also fighting against the disproportionate cultural representation they receive from queer media. But when I see efforts to demonstrate the diversity of the queer community in all its radical beauty squashed by other queers, I’m inclined to believe that none of us can stare into the mirror and see beyond ourselves.

Bobuq Sayed is a queer Afghan-Australian writer, editor and performer currently knee-deep in the murky waters of a literature thesis on ecocritical postcolonialism.