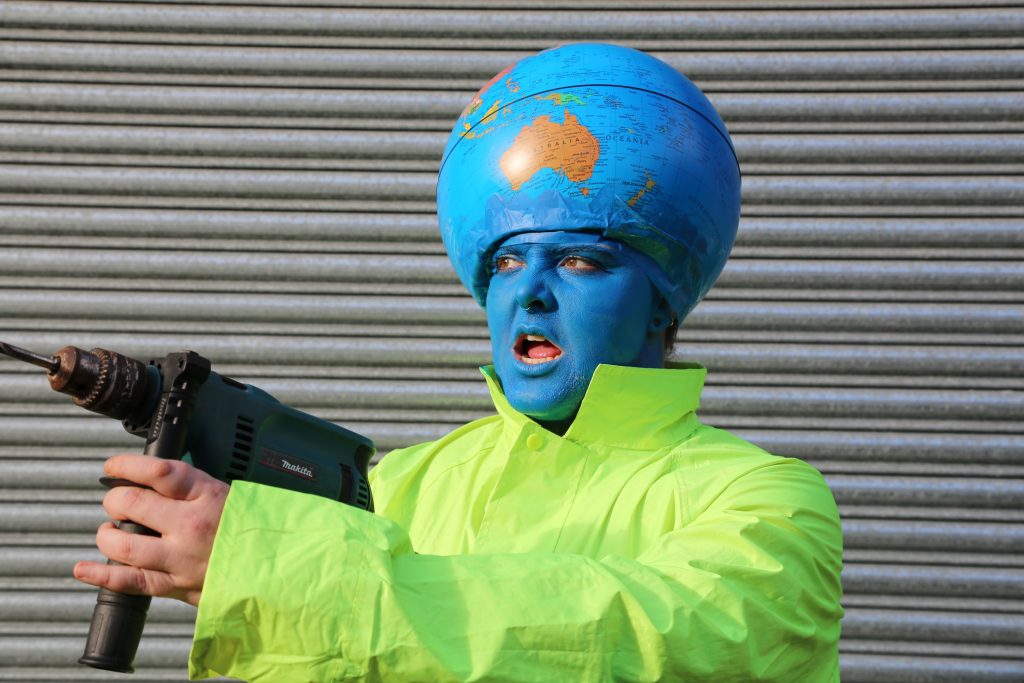 Hydraulic Fucking is a queer political theatre performance that shares the wisdom, research, and humour of Yuwaalaraay woman Cheryn Frost. Created as a part of her residency at Sydney’s PACT Theatre, the one-woman show draws parallels between fracking and sexual consent, and serves as a call to arms to prevent further environmental devastation from taking place on country. The show runs until August 24. More info here.

Did you have an ‘a-ha’ moment while trying to think of a performance for this residency or did the idea for Hydraulic Fucking come to you over time?

I had no idea what I was doing. I had a one-week residency last year, and I was in panic mode. We went down to Melbourne and got to do a lot of workshops. I just read back through my book of ideas. There was some really outrageous stuff in there.

I was on Facebook, and a Seed Mob ad came up on my page. These guys are doing some great work in the Northern Territory. They’re Indigenous youth running against all these companies and fighting against fracking on country. I was like, ‘wow, that’s wicked!’

I fell into looking into all the government policies around exploration permits for these companies to go and frack on country. And I found this one section that said if you say yes to an exploration permit, it’s then up to the company to decide whether or not they want to frack that land.

So for instance, if I’ve got traditionally owned land and I say, ‘yeah sure you can go and have a look at my land’, and then two months later I’m like ‘no, I’ve really thought about this. This is a bad thing and I don’t want this to happen’, once you’ve said yes to an exploration permit, you can’t say no.

So it’s intentionally manipulative by using language that it makes it seem like those companies are just having a look when really they’re seeking permission to start fracking?

Exactly. It’s disgusting. Then I was like, wow, that is consent of the land. Let’s personify that and say that’s consent of mother earth, and mother earth is a human. And if she says yes to begin with and then decides ‘no, I actually don’t want this,’ that becomes an assault.

As a woman, sexual consent is a very similar ballgame with saying yes to begin with and then saying no halfway through. If it doesn’t stop, then that’s assault. I was like, wow, these are two very big subjects that are actually quite parallel.

I could imagine writing this would be really emotional for you as a Yuwaalaraay woman.

I think it’s just hard because of caretaking and culture on country, and how that’s been silenced. There’s a serious fight that’s happening to save country and to save sacred sites – all these things that are implicated by fracking. These companies are so happy to come in and ruin sections of culture for a monetary profit on something that is finite. It’s probably less now, but there’s only 180 years worth of natural gas that we can frack from under the earth before there’s nothing left.

Culture is going to survive because we’re the ones who carry it, but they’re ruining the thing that we have been taking care of for so long. For 60,000-plus years. It’s this thing of: you come, you take, you leave, and then you’ve given nothing back. It’s scary.

The government are just puppets to make money for themselves and other people. And they’re profiting off the back of traditional ownership and culture to get what they want. It’s disgusting. It makes me so angry.

Mob out there are fighting against this constantly and it’s like we’re continually yelling and no one is fucking listening – and it’s not okay. It’s very much like these companies are sitting on this pyramid scheme, and then community and culture are sitting in this circle of life. This land is a living thing. It is a being. It is a part of who we are, and we give and we take from her. But for these companies, there’s no understanding of that.

Yeah. Definitely. The structure of this show is that there is this guy and he goes on this journey. He makes this porno about fracking because he really gets off on it. I’ve made him out to be this sad little bastard that just lives at home and has never had a girlfriend and he doesn’t really know how to use his dick besides fucking the earth. He works on these fracking sites and his dad works on these fracking sites, so it’s in his blood and he loves his job. It’s quite jarring playing this person who is so destructive.

And then mother earth starts speaking and she’s wanting to have this mother-to-child conversation. She’s like, ‘I’m not angry and I’m not upset, I’m just really disappointed. I’ve been giving you these signs and I’ve been showing you these warnings.’

Our temperature’s risen by 0.5 of a degree, and now we’ve lost 50 per cent of the Great Barrier Reef, which is 375 square kilometres of a living creature, a living organism, that is dying right there on the coast of Australia. We had cyclone Tracey. We had dust storms, tornados, droughts.

This is my call to arms to spark a little fire inside of you to go like, holy shit, we need to change something here before it’s too late. We all need a little bit of hope because, hopefully, this will get better, but if we don’t all link arms, then it’s not gonna happen.

Belinda Quinn writes, edits and produces storytelling for outlets like Archer, FBi Radio, and Australian music media. You can read more of their work at belindaquinn.com.