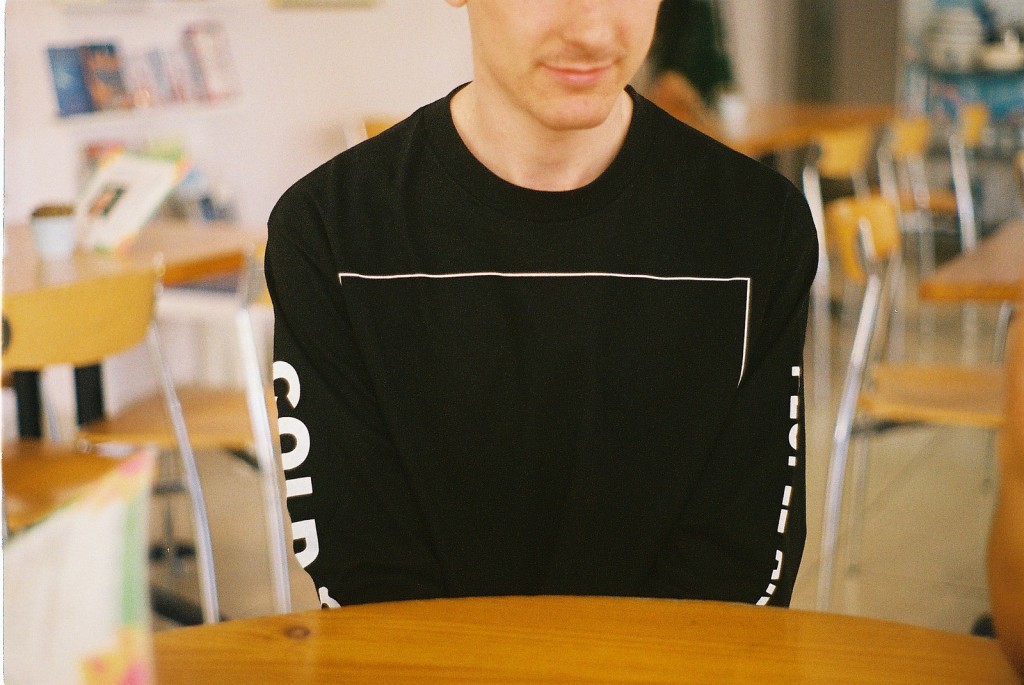 Fleur Kilpatrick talks to people in parks, in mountains, in bedrooms – and out the back of museums – and records them speaking about gender, sex and beauty. Over the next few weeks, Archer will be sharing her interviews online.

Fleur: Describe where we are.

Him: We are in a park. There’s surprisingly lovely green grass and a plane flying overhead. There’s one of those weird early-90s playgrounds that’s entirely vivid McDonalds-coloured plastic. I’m kind of really into that aesthetic.

Fleur: Do you remember the first time you kissed a guy in public?

Him: God dammit, Fleur! I mean I guess you would just dive straight in with that.

It was 2009. We kind of did that thing that eighteen-year-old, heavy-scare-quote ‘straight boys’ do where we joke kissed.

Fleur: So at this point, you’re still thinking of yourself as straight?

Him: No! I’ve always known that I liked guys and girls. I’m reluctant to tell stories about my sexuality because I think that’s a narrative that straight people expect of us and want to hear. I think they want us to be like, “No, I am so sure of myself!” because it re-affirms that their heterosexuality is sure and set in stone.

Fleur: You talk about hating men: how do you reconcile your own masculinity with this sense that – that’s such a big question!

Him: Yeah, but it’s a big question that I’ve been asking myself a lot. I think reconciling your own masculinity is actually mostly dealing with your own internalised misogyny. If we’re honest. Like, it is.

So my brother got married and had a Buck’s Weekend. My brother is not a dick but he fucking loves Jesus! He also had absolutely no desire for there to be any strippers. He was like, “Look. First of all, I think it’s gross. Second of all, I’m getting married: I don’t want to see another woman’s vagina ever again. That’s literally the point.” And I was like, “I don’t think it is but that was a cute sentence.”

He had one gay co-worker. I’m not incredibly masculine, but his co-worker is just a glorious dude who completely fucking owns his gender performance in a way that I am not at a stage that I can do.

It was this fascinating thing having drunk straight men tell me that they liked me more because I was less ‘girlie’. And I was like, (puts on an overtly effeminate voice) “Well, first of all darling, she’s exhausted! She’s had a long fucking day hanging out with you dickheads.” (He returns to his regular speaking voice.)

We both just ended up using female pronouns for the entire weekend. They got really angry about it at one point. There’s nothing like someone yelling at you that they accept you, but you’re being fucking annoying that tells you everything you need to know about how straight masculinity works.

So I guess that’s how I reconcile my masculinity: by actually disowning it most of the time.

Fleur: What role does feminism play in your life?

Him: Look, feminism isn’t my space to intrude on. I owe a shit load to feminism but I’m not going to call myself a ‘feminist’ purely because that’s their space. I’ll call myself a decent fucking human being who espouses the same beliefs, but honestly it’s a space for women to be allowed to speak without men present.

Fleur: Do you think that there should be a space for men just to be amongst other men?

Him: You mean the entire world! All spaces are men’s spaces by default in our society.

Fleur: But are there conversations that men should be having amongst themselves?

Him: Absolutely. I can’t speak for straight men, but as gay men we need to have some serious conversations about race and misogyny. Gay men who think they get a pass from being a white man because they are gay shit me off. If Grindr has taught me anything, it’s that there are plenty of racist gay men. You don’t want three billion people? Three billion people disgust you sexually? What a nuanced fucking worldview!

And misogyny is a huge deal. I think a lot of gay men are very protective of their masculinity because that’s a reasonable response when people try to feminise you – to try and sure up your masculinity. Women do this, too. “No! I’m not a silly woman! Look at me in this blazer!” I don’t know. I assume there are blazers. But it is a reasonable response… if you’re fucking twelve. We need to get to a point as a community where we are less precious about what straight people think of us. This is a bad direction for our identity to go in. We’re enforcing the same systems that made us feel like shit when we were kids.

Fleur Kilpatrick is a playwright, theatre director and arts commentator. Her work has been seen on stages across the country as well as in the podcast Audio Stage and at schoolforbirds.wordpress.com