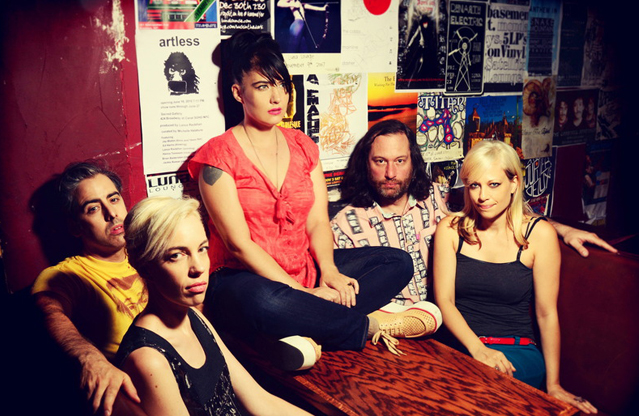 KATHLEEN HANNA, THE quintessential outspoken feminist, musician and debatable leader of the riot grrrl movement, is back on the scene after years of silence due to a chronic illness. Her new band, The Julie Ruin, sets to be a more laid back musical experience in contrast to the hard-hitting issues tackled by earlier bands Bikini Kill and Le Tigre.

Receiving ongoing treatment for her illness, recently diagnosed as late-stage Lyme Disease, Hanna is back in full force, as outspoken and influential as ever.

So you’re coming to Australia for the first time in a few years in January. We are having an interesting time at the moment when it comes to sexual equality and gender rights in our country. Where is America at right now in terms of sexual equality?

I mean, it’s always a case of two steps forward; one step back. The thing that always blows my mind is that I’m kind of an optimist in terms of this subject. I mean, I grew up in a time where I didn’t even know what a lesbian was. I didn’t even know what that word meant, even when I got called one in high school, I just didn’t know. One of my best friends was the only out gay kid at school and you know, he fucked all the football players and then they beat him up.

To see now that many states are passing gay marriage laws, I can’t believe that this is a conversation in our country. It’s amazing; things change here very quickly. When I was on tour with Le Tigre, everywhere we went we met teenagers that were saying, ‘I’ve started a gay/straight alliance at my school, I’ve started a LGBT group at my high school’. Hearing that made me feel so hopeful for the future.

But then you hear stories of trans* people in New York being wrongfully judged for crimes they didn’t commit, being murdered, being beaten and being told it’s their own fault. That’s a really difficult pill to swallow. Also, the conversations between certain trans* activists and certain feminist activists have not always been positive and productive and that makes me sad because trans women are part of the feminist movement and they need to be part of the feminist movement if there is going to even be a movement. So they are the things that make me a little less than optimistic.

You’re married. Was that a shock to anyone at first? Being such an outspoken feminist, do you think anyone was ever surprised by the fact that you would be interested in marriage?

I don’t know that I am actually interested in marriage. I’ve always said that I’m not going to get married unless it’s a right that all of my friends can enjoy as well. There are conversations all the time in the States about how gay marriage is just assimilating to the straight world, but that always really pisses me off because people don’t all get married because they believe in ’til death do us parts. We have to get married to get health insurance, we have to get married so that if our partner’s ill we can go to the hospital, so we can be the beneficiaries of wills and we can have equal parental rights over our children, and that’s whether we are straight or gay.

I got married because I needed health insurance. Thank god I got it because I got very, very sick and really needed it, so I realise it was a good decision. I love my husband, so it didn’t matter whether we married or not and I never hid it. People can criticise and they do, but they don’t know my life, so who cares?

People actually do criticise you for that?

Oh yeah! I did a Q&A for The Punk Singer and a girl actually said that she didn’t think it was punk-rock or feminist [to be married] and I was like, I don’t think getting married has anything to do with it. I used to think that way too, so I respect that opinion. But when my health insurance ran out and I was desperate to have it. Our insurance company is actually very progressive and allows gay couples to be on each other’s insurance if they’re not married, but if you’re a straight couple you have to be married, which I found very interesting.

It’s a similar situation here. Gay couples are recognised for almost every reason – financially, taxation purposes and all that – but when it comes to marriage it’s a no-go zone.

I almost started crying when you told me that [same-sex marriages in Australia] were annulled after five days. I think about those people and what they must have felt like, to have those rights stripped away. I hate that.

When I look back on footage from the ’90s of the early Bikini Kill and riot grrrl days, everything seems really intense and serious. You were dealing with such heavy issues and situations. It really was a high-pressure job you had. Were you actually having any fun?

But you know, we got a lot of shit from all sides. It was really hard for someone in their 20s to maintain any kind of self-esteem. I didn’t have the kind of confidence that I portrayed myself as having onstage. I was actually a really sensitive, insecure person. I didn’t grow up in a family where everybody was like, “You’re great! Do anything you want, you’re awesome!” My mom was really supportive but my father was not. I had a lot of voices in my head telling me I was stupid and I couldn’t do anything, so it was hard trying to maintain that bravado and that intensity when I often felt like I was crumbling. I’m just being honest.

Tell us more about your new band, The Julie Ruin?
I was so, so fucking sick, so we were just talking once a week if I felt well enough, or once a month. The album took three years because we recorded all the music in the studio and then I had a microphone at my house and whenever I had a well day I would sing. I would just sing and sing all day long. I wanted to know what I was besides a sick person. And every time I play music I’m like, this is really who I am.

How is this different from your previous projects?

I’ve always been so audience-focused… not to sell records or anything, more like I’d get letters from kids who say they are going to commit suicide, or they’ve just come out and been disowned by their family, so I’d think, now I’m gonna write a song called Keep On Living and address that letter. I kind of had to step back from that way of writing and just say, I’m gonna write something about my life and that’s okay for one album.

The Julie Ruin tour Australia in January at the following venues and their debut album Run Fast is out now.