A transgender man in the barbershop: Passing, masculinity, and aftershave 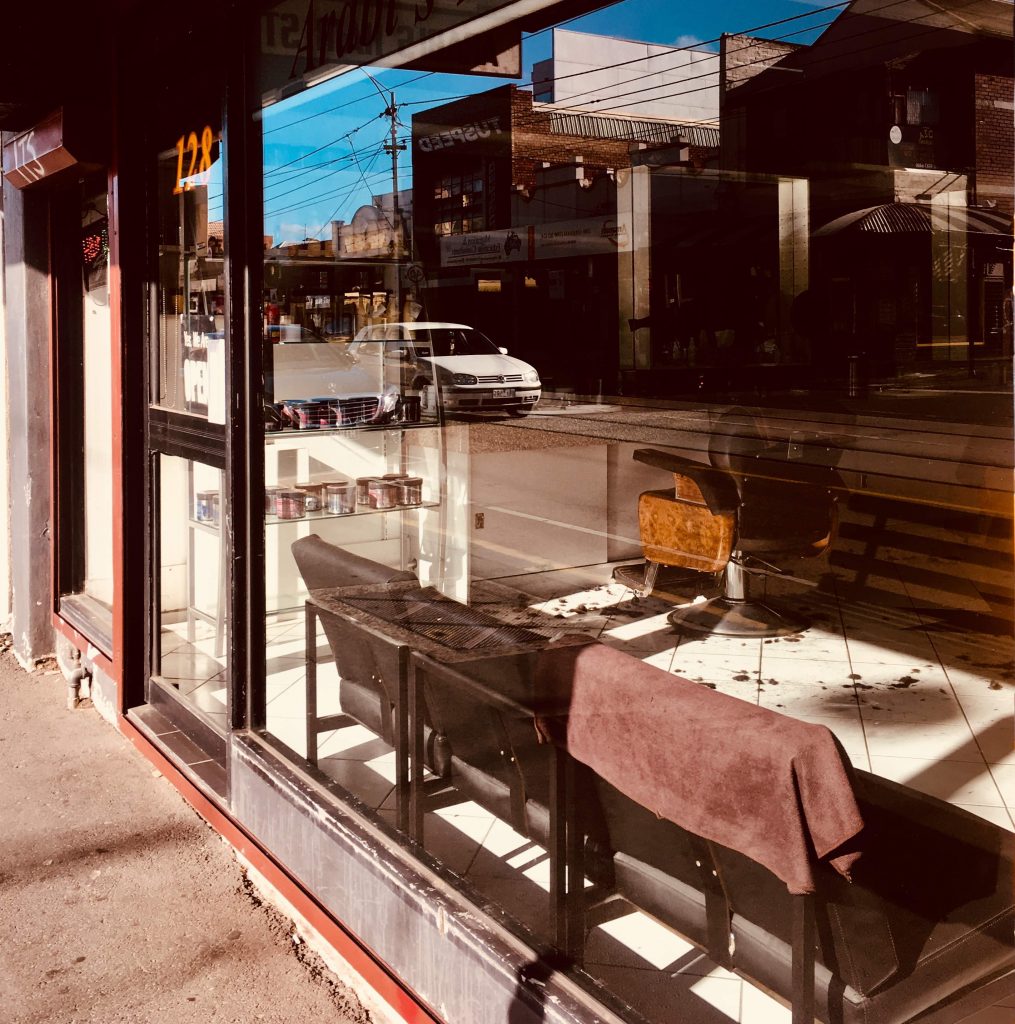 I had not walked into the barbershop for three months, but the barber remembered my face. He is a Turkish guy in his late sixties.

His strength and agility dance in his hands. He is a quiet man with a wide smile that appears every so often. His grin is like a slice of light, a sun eclipse splitting his head from ear to ear.

I am overwhelmed by his perfectionism and the pride he takes in his job, and so I vowed to come back again after my last cut.

The barber’s 70s Datsun is parked in front of his shop on Sydney Road in Brunswick. A non-descript family car smothered with all the affection you can imagine.

I imagine him sitting quietly in the driver’s seat thinking of nothing, his hair’s reflection peeking into the rear vision mirror. All blank faced looking ahead through the windscreen with the world churning around him and the engine turning over and over.

Does he get sad? I think.

I think this because I am sad this morning, by an argument with a person the day before. A friendship gone sour before it went loud, then angry, then silent.

Once through the shop door, I am raised by my barber’s smile.

His grandson is on the end of the waiting couch watching a movie on his phone. He flops randomly; gunshots and explosions go off in his hands. He looks about eleven.

Other clientele walk in after me, numerous men from Brunswick, Coburg and surrounds. They are masculine robust looking men from Turkish and Lebanese families.

Surely they are husbands, sons, brothers, fathers, grandfathers and uncles. I catch my assumptions about their lives, their sexuality and gender as I strive to fit in. I think, they are all so gorgeous in their own way.

I am a transgender man in a barbershop.

The barber finishes a perfect beard trim on a man from the mosque across the road. He pays and leaves. I take a seat in the barber’s chair while those waiting shuffle along the couch behind me. Eyes glance up and down.

Sitting there, I want to express my appreciation to the barber. I want to tell him how much his smile means in a masculine world, in a big city, a world of arguments, high rent, every day stress, job insecurity, impermanence and what a smile means after almost thirty years of homophobia and transphobia.

Because I pass now.

Instead, I ask how he is.

“Good, how do you want the hair, same as last time?”

This was all he said as he set upon the task. His silence haunted me with unasked questions floating about my mind. Conversation and connection was uninitiated as blades cut through the air instead.

I became engulfed with emotion as he worked with precision and care. Trimming, combing, noticing and snips on all sides.

The barber’s hand briefly rests on my shoulder and I realise the craving I have to be held. I feel sad, my thoughts become dramatic and I remember the absence of my father. How I was never the son he wanted.

Everytime the barber grasps my head now it feels like tenderness; it is cradled, stroked and reassured. I wonder, does he know how much I need to be touched?

I wish he would hold me.

He has no idea I’m trans.

The barber takes a blade to my throat and scrapes my neck. Whiskers ping off as if they were needles on a cactus. I swallow.

No Adam’s apple, I think to myself, and the blade moves on.

I hear cars pass down the street, their big engines roaring.

My father came to Australia after the war. His Latvian mother and his Russian father cared for me during school holidays at their home in South Sydney. I remember the Latvian club, the eastern European delis, my cousins and their first cars in Hurstville.

I remember people seeing me in tow with my grandparents asking me things in German, Latvian and Russian. I spoke English and always felt different.

The cars of Sydney Road rev and screech, the barber does not flinch. His hands remain steady as a surgeon’s.

Sitting there I knew my sad feelings would go just like the sound of those cars disappearing in fleeting moments. Hands on my face, my neck. The aftershave is the same as my grandfather’s.

When my grandfather died, my grandmother kept a bottle. I upset her when I put it on once and she made me have a shower. I was eleven.

The barber wiped my neck gently with a towel. He combed my fringe and grabbed some gel. He styled my cut immaculately, moving this hair and that. I imagined him doing the same as a young man, preening in a mirror on his way out somewhere.

Now he is in Brunswick, wearing a pink barber shirt, mustached, his hair silver-grey, working from a fake wood-panelled room with men parked in chairs, the smell of tobacco, of aftershave, and a restless grandson.

I am here too. I was never a young man in the world’s eyes, but now I am an older man in his forties, possibly smelling of sadness.

Possibly reeking of no father.

The moment ended and the barber held a mirror to my head showing me the back.

“Thanks, the hair is perfect, you do a good job.”

I hand over fifty dollars and I get forty dollars back.

The barber smiles again and says, “ten dollars off today.”

Gavriil Aleksandrs is a Melbourne based, bush-whacking transman, Buddhist, conservationist and social worker. He has worked in the family violence, aged and disability, homelessness and non-profit sectors for over 15 years before becoming a public policy wonk. Gavriil has a non-monogamous relationship with writing genres and enjoys writing non-fiction, fiction, essays and poetry in equal measure.