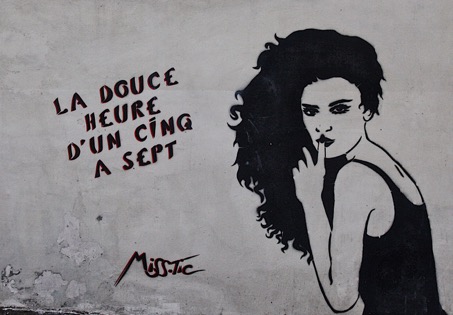 My exchange semester in Paris was a culture shock but not the type I was expecting. I had uprooted myself from Canberra, home to a visible queer community and the largest percentage of ‘YES’ votes for the same-sex marriage postal survey, to find myself in a sterile metropolis.

A fondness for glitter and openly declaring pronouns are norms at the Australian National University. Moving to ANU in 2016 allowed me the breathing space to begin unknotting my own sexuality. At the same time, I was acutely aware that I was floating in a comfortable bubble.

I should have expected to find myself out of place in Paris. I had been learning French since early high school and knew the ways in which the French language is inherently sexist – reverting to the “masculine” as the neutral form of expression as well as the inflexibly gendered pronouns.

Yet beyond linguistics, the only aspects of French queer culture with which I was familiar were those belonging to the literary world: the homosexual poet Arthur Rimbaud and James Baldwin’s fictional portrayals of Paris. My information was at least fifty years out of date.

I used the fortnight before semester to learn the ropes in Paris. Twenty minutes of street-side observation informed me that thongs or Birkenstocks were reserved solely for the feet of American tourists, and even going down to the local shops in leggings and a t-shirt was a serious crime.

It’ll be better at university, I hoped, assuming that the left-wing bourgeoisie students would at least have a style similar to inner Melbourne. Boy, was I wrong.

L’institut d’études politiques de Paris – informally known as Sciences Po – has a reputation as one of the best political science universities in the world. I selected it as my exchange destination mainly to see what the fuss was about.

On the first day, I met a student with glitter eyeliner and a powder pink bomber jacket. They turned out to be the president of the LQBTQIA+ society.

They also turned out to be the only person on-campus I would ever see wearing anything resembling what anyone at ANU would have considered ‘gay fashion.’

Sciences Po likes to boast its ability to churn out future French presidents. The institution is home to the future wealthy elites of France.

When a student in my French political history class turned up in a suit with cufflinks, he didn’t even raise eyebrows.

I am thankful that I discovered Feminists of Paris, a group that runs Feminist-themed street art tours around Les Butte-aux-Cailles in the thirteenth arrondissement, as early as I did.

I had a lot of time to burn during my first couple of months on exchange and searched for left-of-field activities to keep myself amused.

When I stumbled upon the group, I was intrigued.

Their tour was a breath of fresh air. It was sassy. It was informative. And above all, it was intersectional.

Among other artists whose works are sprayed across the walls of the neighbourhood, those of Miss.Tic were my personal favourites. She has a sly sense of humour which will make you smile, regardless of your views on feminism.

“The abuse of pleasure is excellent for one’s health,” quips one of her stencilled characters. “The sweet hour from five to seven,” hints another – “five to seven” is a French expression denoting the time after work that one spends with a secret lover.

Our guide explained that Miss.Tic has been adding colour to Paris since the 1980s but curiously enough, does not identify as feminist herself. But Miss.Tic’s art, like the tours themselves, was a liminal space – a way of putting one’s toe in the waters of feminism without the pressure to fully submerge one’s self.

Maybe the lack of ‘contractual obligations’ to become a full-fledged feminist was how the tours managed to attract an impressive number of male participants. 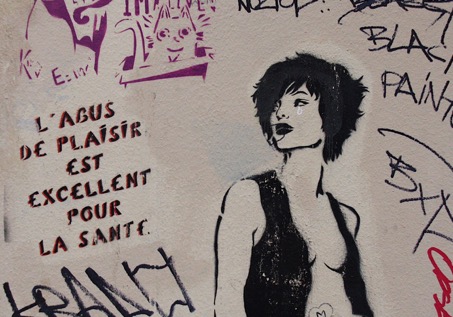 The co-founders of Feminists of Paris, Cécile and Julie, were masters students at Sciences Po. They had become feminist activists while studying in England where they had encountered gender studies – a discipline still foreign to French academia. I took the opportunity to talk to Julie about the tours.

Julie explained that France has a tricky relationship with intersectional feminism in ways different to those of the anglophone world. The uniformisation of French society means that one’s identity is first and foremost “French” and every other identity is secondary.

This hierarchy is best known worldwide as the French system of secularism. This has manifested itself in the notorious ban on the veil and aims to eradicate religious symbols in public spaces to ensure “absolute equality”.

But it is not only religion that comes second place to “French” identity.

Ethnicity, sexuality, gender…these facets of intersectional feminism are not acknowledged by the French State. In fact, statistics on ethnicity are banned in France. Minority groups remain invisible in any supposedly feminist legislation.

Progress seems unbearably slow: there was much fanfare when the French government finally removed the option of “Mademoiselle” from official forms. Now one can choose their title as either “Madame” or “Monsieur”. There is no opt-out or non-binary option.

Feminists of Paris makes a tear into the public space where those who would not normally engage in political or gender debate can slip into the feminist world without feeling the need to be a policy-guru or female-identifying.

My tour group had a ten-minute discussion initiated by one of the male participants about the gendered use of titles on the kerb of a street corner, much to the amusement of a middle-aged couple sitting at a café nearby.

Once we ended the tour at Sputnik, a communist-themed bar, debate somehow led to the sexism of ‘uritrottoirs’ – the open-air urinals that had been installed around Paris over the summer. It wasn’t exactly a topic of conversation I would have been able to bring up in class.

Above all, I admired the clever approach of Cécile and Julie: using street art as a creative gateway into a relatively uncharted landscape of French feminist culture. Julie told me that the goal of the tours is “to demystify that feminism is difficult to wear.” Her wording could not have been more suitable.

I felt significantly less homesick after the tour. I made an effort to explore parts of Paris beyond the glamorous old-Europe streets, and escape the shadow of traditional institutions like the Sorbonne and Sciences Po.

I even ended up discovering a feminist bookstore, Violette & Co., which was far better stocked on queer and feminist literature than the university library.

Although I never managed to muster the courage to wear my more flamboyant outfits to class, I did manage to overcome my claustrophobia and walk with classmates for the Paris Women’s March Against Sexual Violence. I like to think that surging wave of purple was street art in itself.

Emma is an amateur writer and photographer based in Canberra. She thinks she might be bi-romantic demisexual but is always open to suggestions.